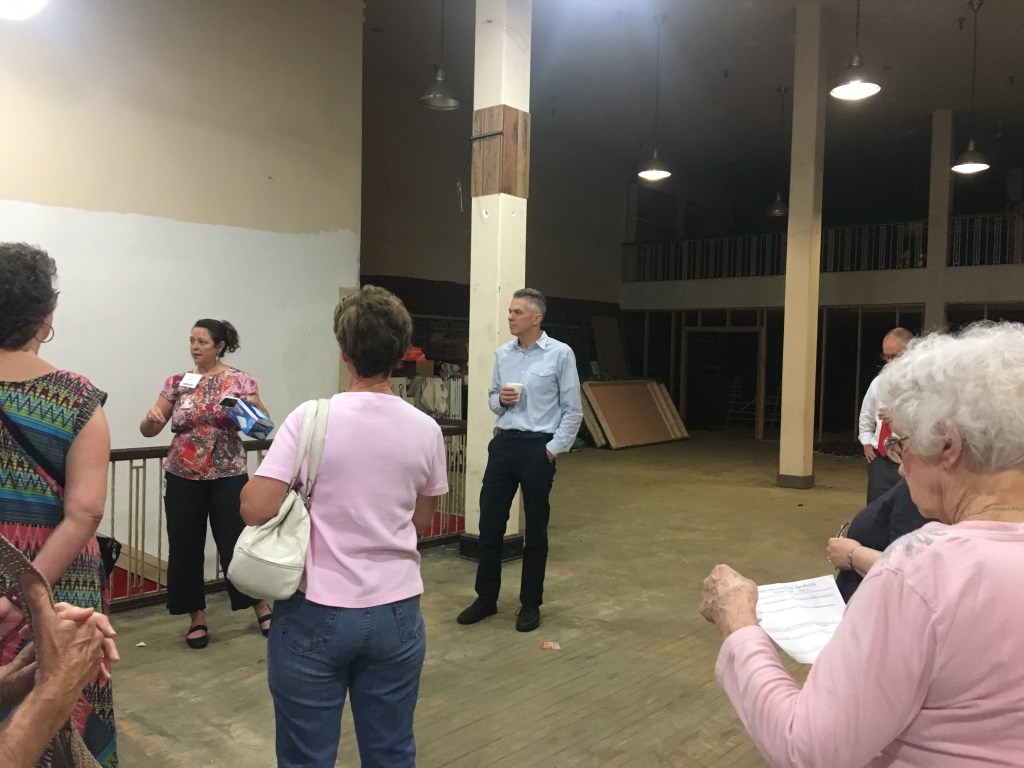 Larissa Harper, the downtown development director, and Britt Weaver, the developer of the Empire Hotel restoration project, talk to the crowd in the proposed commericial space in the Empire Hotel during the open house on Aug. 2.

SALISBURY — Residents were offered a peek inside the downtown Empire Hotel on Thursday ahead of  Tuesday’s City Council hearing on leasing the property.

An open house — led by Britt Weaver, a developer with Black Point Investments; Larissa Harper, the downtown development director; and Kyle Harris, the city planner — showcased the art deco design of the historic Empire Hotel and offered a glimpse of how the property will be transformed.

At Tuesday’s hearing, they will propose the terms of the master lease, which includes leasing part of the commercial space once occupied by Montgomery Ward for 10 years to the developer at $12 per square foot. The 13,319-square-foot space would generate about $160,000 per year.

During the tour of the commercial space, Harper spoke about the possibilities of a co-working space on the first floor and mezzanine. Weaver said the basement could be used as storage space for residents living at renovated apartments on the upper floors.

“What you see from these types of projects is that all ages are looking to be downtown,” Harper said. “Folks want to be able to not have to drive long ways. There’s gas prices. You can walk out your door, get your cup of coffee, get your pastry, maybe go to work right next door or in your building, go to a play, go to the symphony, and do things and have the charm of the city such as downtown Salisbury.”

The idea of retail space generated talk among the group of about 25 attending the open house, some describing a pastry shop or a coffee bar with a window.

The railings and mezzanine of the Montgomery Ward space will be preserved.

The City Council will decide whether the Empire Hotel is designated a local historic landmark, which would prevent the developer from gutting the interior without losing a federal tax credit.

“In this Montgomery Ward space, there are certain interior art deco components which will be preserved. And in the Empire Hotel proper on the second floor, you’ll see the entire first hallway that we’ll walk through. All of the decorative woodwork, the door arches, the transoms above the doors, a lot of the features of the ballroom will be preserved,” Harris said.

Several people asked Weaver about the preservation components of the building, from the wallpaper to a clawfoot tub in one of the bathrooms. Weaver said there are limitations of maintaining the older pieces of the property while ensuring the building is up to code.

“Sometimes you’re marrying old architecture with modern architecture,” Weaver said. “For example, one of the things you have to show to HUD is that the noise between units, you have proper interior insulation. For example, floors: Do you have a wood floor? Is it viable, or do you need to apply a lightweight concrete for noise abatement? Those are the things we have to work through, and it’s a process.

“You have to meet every residential-type requirement while maintaining the historic, and sometimes those things are compromised along the way,” Weaver said.

Another concern is parking. Plans include about 62 parking spaces and 50 to 65 apartment units. Weaver said developers are working with the city on the comprehensive downtown parking study to solve the potential parking problem for the property and Main Street.

Weaver said the public has generally been receptive to the Empire Hotel renovation project.

“It’s unbelievable of how well-attended these tours have been,” Weaver said. “We had one Monday, and we had more than a 100 people. We had one last fall that I think we had 180. People here really care about this project. Even if they have concerns, we have to deal with them, but I haven’t had anyone be a naysayer just to be a naysayer.”

At the end of the open house, participants were given a feedback form to fill out.

The City Council hearing on the master lease will be held Tuesday. The topic is expected to be discussed at 6:30 p.m.