At 66, Norv Turner relishes return to coaching with Panthers 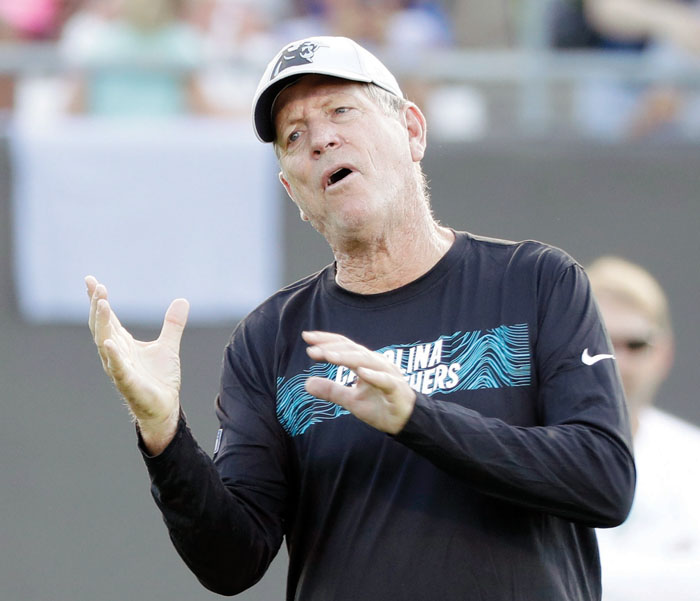 FILE - In this July 26, 2018, file photo, Carolina Panthers offensive coordinator Norv Turner directs a player during an NFL football practice at training camp in Spartanburg, S.C. Panthers new offensive coordinator Norv Turner is expected to address his decision to come out of retirement to coach at age 66, his relationship with quarterback Cam Newton and thoughts on the Panthers offense heading into the season.(AP Photo/Chuck Burton, File)

SPARTANBURG, S.C. (AP) — Norv Turner easily could have opted to keep traveling the world with his wife, writing country music songs and playing with his grandchildren.

Instead, Turner decided to return for a 33rd season of NFL coaching as offensive coordinator of the Carolina Panthers.

Turner, who won two Super Bowls as a coordinator with the Dallas Cowboys in the early 1990s, wasn’t necessarily looking to return to coaching after sitting out last season. But when approached about the Panthers’ job opening, Turner couldn’t resist the chance to reunite with head coach Ron Rivera — Turner’s assistant for four seasons when he was head coach of the San Diego Chargers.

Turner joins a team that has his fingerprints all over it.

When Rivera was hired by the Panthers in 2011 — also Newton’s rookie season — he brought in Turner understudy Rob Chudzinski as his offensive coordinator. And when Mike Shula took over when Chudzinski left to coach the Cleveland Browns, many of Turner’s play calls remained. So it’s not like Turner is starting anew.

But he does have some new ideas.

Newton said the onus has been on Turner “to take what we have done good and expand on it, rather than just ripping the sheets of paper up and having a this-is-my-way-or-the-highway mentality.”

Turner was familiar with Newton because Scott worked with him during his first two seasons with the Panthers in his first stint as quarterbacks coach.

Turner said he likes the way Newton sees the entire field, but that his goal is to improve the quarterback’s decision-making skills.

“We want to make sure we get all of our eligible receivers involved,” Turner said.

“That has to be my mentality,” Newton said . “We have a lot of guys who can take two yards and turn it into 20 yards, or more. But it starts with me and I have to trust those guys and get the ball to them.”

The Panthers talked last season about limiting the wear and tear on Newton’s body after undergoing rotator cuff surgery in March 2017 by cutting down on his running.

Newton is 29 and entering his eighth NFL season.

But Turner put no restrictions on Newton, Carolina’s leading rusher last season and the NFL’s all-time leader in touchdowns rushing by a quarterback, when he spoke after practice Thursday.

Turner did reiterate Rivera’s point that Christian McCaffrey will be a focal point of the offense, saying that 20-25 touches per game is not out of the question for the second-year running back.

It is, after all, a unique situation for him.

“I am very comfortable with coach Rivera and the things he likes to do,” Turner said. “We were together for four years, so nothing is a shock to me.”