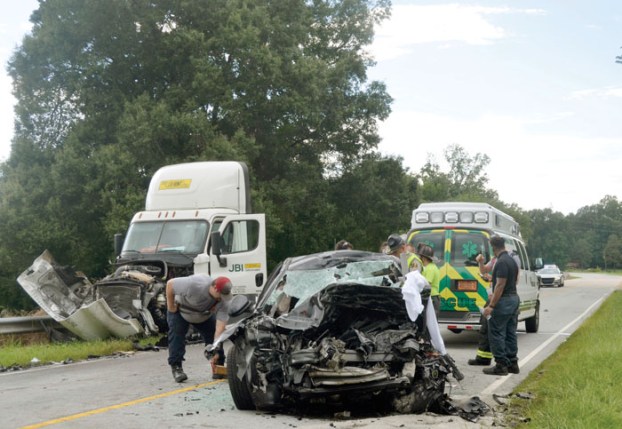 N.C. Highway Patrol troopers and Locke Fire Department responded Thursday to this two-vehicle collision in the 7600 block of Sherrills Ford Road. The driver of this Chevrolet Cruze was killed wheni he reportedly crossed into the path of this tractor-trailer. Shavonne Walker/Salisbury Post

Witnesses said they believe he crossed the double line before colliding with a tractor-trailer. The two vehicles struck head-on and sent the victim’s Chevrolet Cruze spinning.

The driver, whose name was not available, was pinned inside the vehicle.

A man who did not want to provide his name said he was in a vehicle traveling behind the driver.

The man witnessed the crash and said he jumped out of his own vehicle and broke a back window of the victim’s car because the car was smoking and he hoped to be able to get the victim out.

He knew relatively quickly that the crash was serious, he said.

Members of the Locke Fire Department used tools to cut into the car door to remove the victim.

The tractor-trailer driver was taken to the hospital by ambulance. His name and condition were not available.

The N.C. Highway Patrol is investigating the collision.

SALISBURY — Rowan-Salisbury Schools will begin blazing a trail at the start of the 2018-19 school year. The State Board... read more