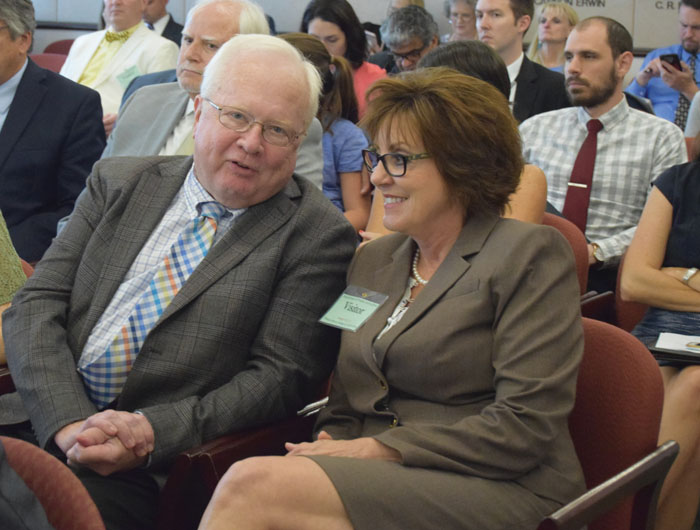 SALISBURY — Rowan-Salisbury Schools will begin blazing a trail at the start of the 2018-19 school year.

The State Board of Education on Thursday unanimously approved the district’s application to become a “renewal school system.”

Local representative Greg Alcorn recused himself from the vote.

The renewal option was offered to the school system in a June 14 vote by the North Carolina General Assembly. It will allow Rowan-Salisbury Schools to exercise charter-like flexibilities in curriculum, staffing and other policy areas.

RSS is the first and only district in the state to be granted the renewal status.

For Superintendent Lynn Moody, Thursday was a day to celebrate.

“I’m very excited. It’s great to have the last piece of approval,” she said.

Moody — along with other educators across the state — has been asking lawmakers for more public school flexibility for years. It’s thanks to luck and hard work that Rowan-Salisbury won the prize.

Beginning immediately, the district will have almost complete control over things like curriculum, calendar, state-mandated testing, budget and personnel. The district will still be monitored and required to report data on use of funding and other information to the state, but some of the usual restrictions are gone.

Moody said it is encouraging that the vote to become a renewal school district passed both the Rowan-Salisbury and the state boards of education with unanimous approval.

“There’s been a tremendous amount of support and encouragement,” she said.

Most of the 2018-19 school year will be taken up by design work and planning. It’s likely parents and students won’t notice any changes during the upcoming year. The 2019-20 year, however, will be a different story.

During a Wednesday presentation to the State Board of Education, Moody said every teacher will feel like a first-year teacher that year.

“We want to stay creative and innovative in the work, so we’re going to be pushing in areas that are a little uncomfortable for us,” she said.

Much of that planning will be put in the hands of local teachers.

“What I hope to see is that teachers feel like they have more of a voice,” Moody said. “…And that will lead to students being inspired and more engaged in the classroom.”

The first step is to set up teacher-led teams at each school. The teams will discuss what changes are best for their schools and help with the transition. Principals have already opened calls for membership on the teams, and assignments should be final by mid-August, according to Moody.

Some reshuffling has already occurred at the district level to create design teams that will partner with individual schools. The back-and-forth partnership and communication model should help schools launch changes and ideas quickly and seamlessly, Moody said.

“We’re trying to be able to be nimble in decision-making from the teacher design teams,” Moody said.

Within the next month or two, Rowan-Salisbury Schools will launch a web page, accessible from the www.rssed.org home page, that will list renewal projects, progress, project leaders and timelines. Parents and other county residents who want to check in on district progress on calendars or testing replacements will be able to do so with a single click.

“It will be a pretty robust link on our website so that people can stay up to date on the progress we’re making as we move forward over the next couple of years,” Moody said.

Each suggestion and decision will be evaluated with a series of questions:

• What do we need to do to become a world-class learning organization?

• Does this inspire passionate engagement?

• Will this work lead to unique or creative insights?

• Will it lead to deep learning or improved processes?

• And will the work matter in the future?

“We’re going to use this as the filter and the lens as we take on project work in the future,” Moody said.

The questions will help design teams differentiate between a “shiny idea” and one that will actually improve the district and student learning.

School administrators know the process won’t be easy. Moody anticipates “a few bumps in the road” and acknowledged that the design or approach to becoming a renewal district may change because it’s all new territory.

“We need to ask people to be patient with our process over the next year as we begin the work,” she said. “We promise to keep everyone informed and be transparent as we move forward, but it will take some time before our community sees a great deal of change.”

Rowan-Salisbury Board of Education Chairman Josh Wagner said the board will discuss how to proceed at its Aug. 13 work session — and beyond.

“There’s probably going to be some discussion at every meeting for the next few months, honestly,” Wagner said.

It’s up to the board to lay a few ground rules before design teams are given free reign. For example, will all 35 schools be allowed to have individual calendars, or will the board give a few options to choose from?

The journey starts Wednesday with a kickoff breakfast that is by invitation only. It will feature a panel discussion with state and elected officials. RSS spokeswoman Rita Foil said there are plans to live-stream the kickoff.

On Aug. 13, the school board will begin putting ideas together. According to Moody, Aug. 16 will bring a districtwide meeting for principals and the teacher-led design teams, and Moody will walk staff members through the renewal process at the Aug. 21 back-to-school conference.

“I think we’ve kind of hit this thing hard for a few weeks now, and now we’re just seeing how we can move forward,” Wagner said.