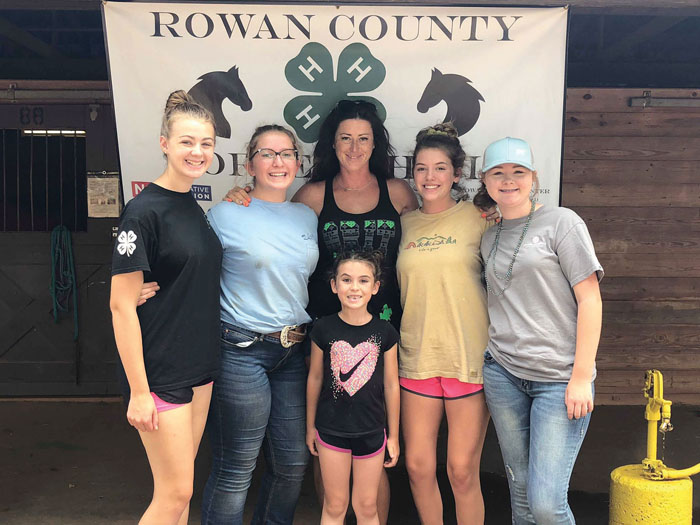 Rowan County 4-H has many members who are involved in 4-H horse competition.

In order to compete at the state level, these 4-H’ers had to first qualify at a district level horse show.

Showing in the senior division (ages 14-18) was Lackey, who took blue in equitation, and Furr, who was overall Senior Grand Champion.

In the Junior division (ages 9-13), Causby was Junior Reserve Champion and White was third overall.

Especially fun was the costume class held Saturday night. The club represented “the Original HorsePower” by dressing in racing gear and simulating a pit stop on White’s horse, Castile Centellas. The group checked her tires (hooves), checked the engine (listened to her heart) and gave the “driver” water.

It was a fun way to end the day of competition as the club worked as a team.

As a result of their performance at the state horse show, Causby, Furr and Lackey will compete in the Southern Regional 4-H Horse Show held this week in Georgia.

Barlow competed in the senior division for hunter under saddle, hunter equitation and bridle path hack.

Baylee Hampton competed in Cloverbud pleasure/equitation, which is for ages 5-8.

The BCR Trailblazers spent several days competing in these events.

All of these 4-H’ers participated in the speed events, which included barrels, pole bending, Texas barrels, flag race and stake race.

Hill, Jacobs and Sweatt have competed in the State Horse Show for a few years and each has exceeded their personal best each time.

This was Holt’s first time competing with her horse, Roscoe.

All of these 4-H members have put in many hours of learning and practice in order to prepare for the horse shows.

Anyone interested in getting a child involved in Rowan County 4-H should contact Agent Laura Allen at 704-216-8970 or laura_allen@ncsu.edu.

Information is also available at the Rowan County Cooperative Extension office at 2727-A Old Concord Road, or online at https://rowan.ces.ncsu.edu/.

The Rowan County 4-H program also has a Facebook page.