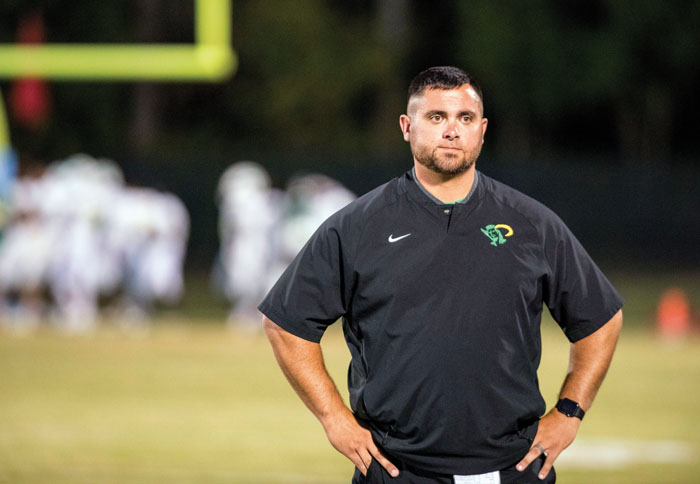 SPENCER  — The start of official football practice on Monday was only the second biggest event of the week for North Rowan head coach Ben Hampton.

The Hamptons (and Big Green Nation) welcomed a new addition to the family on Tuesday morning —  Lily Catherine —  who checked in at 9 pounds, 6 ounces and 21 inches. Three days earlier, Lily’s brother, Atticus, had celebrated his first birthday, so the Hamptons should have their hands full for the next 18 years or so.

Hampton was at practice Monday, but he focused on family after that. The rest of the first week, the Cavaliers have been coached up by assistants.

“The family is the priority, even over football,” Hampton said. “But no worries. Our guys are in good hands with the staff that we have. They know what to do and they’ll get the work done that we need to get done.”

North lost one key coach, with Danny Misenheimer, moving over to West Rowan.

“Danny was my eyes up top,” Hampton said. “But he made the move for family reasons, and you can never blame anyone for that. Danny’s son is at West Middle.”

North opened the 2017 season, Hampton’s third at the helm, with a satisfying win over rival Salisbury, overcame a 24-point deficit to stun old rival Lexington and finished with the county’s best record at 8-4.

That was the good news. The bad news was North lost a showdown with West Rowan that decided the mythical county title. The Cavaliers also dropped their two major Yadkin Valley Conference tests against North Stanly and West Montgomery, then exited from the 1AA state playoffs in the first round with a loss to Polk County.

North has to move forward without graduated county offensive player of the Jaleel Webster, who provided 36 TDs in his career. How valuable was Webster in 2017? In that playoff game, he accounted for 308 of North’s 333 yards.

North also lost kicker/punter Jacob Young, a four-year fixture and an All-State pick. North hasn’t had to worry about punts, kickoffs, field goals and PATs for a long time.

Hampton said North has about 75 athletes out for football.

As far as leaders for this season, North has Willis Mitchell back at quarterback. Mitchell accounted for 27 touchdowns (20 passing, 7 rushing) as a junior.

“He’s taller and he’s slimmer and he could have a big season,” Hampton said. “We’re hoping that his touchdowns to interceptions ratio will improve some with experience — and with more experienced receivers.”

Mitchell tossed 14 interceptions last season, with two each in the losses to West Rowan, North Stanly and West Montgomery.

Benjamin “Rhode Island” Caldwell will be tower of strength for the offensive line at left tackle. He’s the only returning 0-lineman, but he’s a good place to start. He’s 6-foot-4, 265 pounds, with long arms and huge weight-lifting numbers.

“I’m not sure if they call him Rhode Island because he’s from there or because he’s as big as the state,” Hampton quipped.

The line usually has been the foundation in recent years for stout North defenses, but this time Hampton is looking to the linebackers for leadership. Tyzai Lyles, Nautica Patterson and Jordan Goodine are tough, experienced players and have tackled a lot of people.

North also has boast future stars in the secondary in sophomores Xzavier Davis and Jaharion Graham. Both started on the varsity as freshmen.

Hampton took a group of Cavaliers to a one-day camp at Coastal Carolina. They not only got some exposure, they ate a lot of burgers and got a chance to play in the ocean.

North doesn’t have major schedule changes this season. It’s the same 11 opponents, with the venues being flipped. That means North gets to play West Rowan at home, but it also means the Cavaliers will be on the road at Salisbury and Carson.

North doesn’t play South Rowan and will see East Rowan only in a scrimmage environment.

The Cavaliers get West Montgomery and North Stanly at home this time. That could be important as far as how the YVC race shakes out.

“Those two knocked us off last year, so that could be a nice advantage for us,” Hampton said.

North’s schedule will include a long stretch of road games.  North won’t be home at all during a month of September that includes three road games and an open date. After North takes on Lexington at home on Aug. 31, it won’t be back at Eagle Stadium until it hosts Albemarle on Oct. 5.

Davie County will join the Cavaliers for a combined scrimmage/practice on Wednesday, Aug. 8.  Then North will participate along with all the other county schools in the Rowan Jamboree hosted by West Rowan on Friday, Aug. 10. North is matched up with East Rowan at 8 p.m.

A week after that scrimmage, the Cavaliers will be under the lights at Ludwig Stadium against the SHS Hornets.

“Coach (Hinson) has got it going over there,” Hampton said. “That will be a tall task for us, a heck of a game to start  a new season.”