Panthers’ coach: Only way to avoid camp injuries is to ‘not practice’ 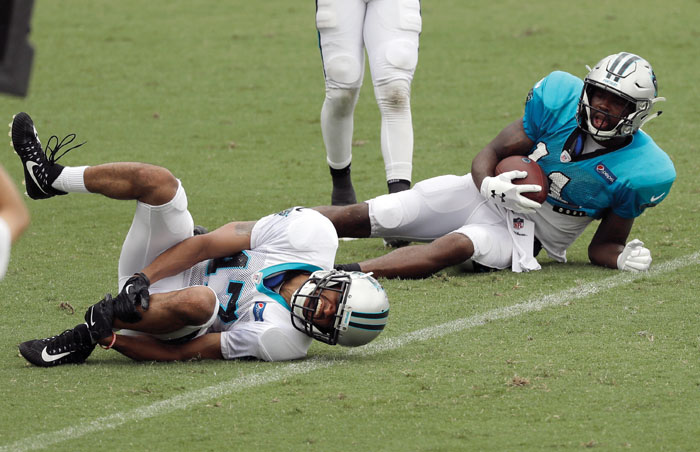 SPARTANBURG, S.C. (AP) — Panthers coach Ron Rivera may have figured out the only way to avoid injuries to key players in training camp.

The Panthers are less than a week into training camp but have already lost two key players to potential season-ending injuries.

Right tackle Daryl Williams, a second-team All-Pro last season, dislocated his patella and tore his medial collateral ligament during blocking drills on Saturday. Two days later, cornerback Ross Cockrell broke two bones in his leg while trying to break up a pass in the end zone during 11-on-11 team drills.

The Panthers aren’t the only team hurting.

It’s nothing new, of course.

Injuries happen every year in training camp, a reminder of the fine line coaches must walk between preparing their team for the physicality of the regular season and avoiding injuries to key players that can derail a season.

“If you look at what happened (with our injuries) the truth of the matter is there is nothing you can do about it,” Rivera said. “That was a freak injury for Ross where the receiver was falling to the ground and he happened to step into it and got rolled up. Daryl was kick-sliding and turned his ankle and came down on it.”

Rivera said injuries are the “unfortunate nature of this game.”

Still, as a coach he is always looking for ways to prevent them, constantly telling players to “be smart” on the field.

He did that prior to Wednesday morning’s practice on a slick field at Wofford College following overnight rain.

“I told the defensive backs and the linebackers, ‘Hey, let’s be smart about the receivers crossing because we don’t want to catch anybody in a bad spot,” Rivera said.

Some injuries can be prevented.

That’s why Rivera and his assistants were unhappy with rookie safety Rashaan Gaulden earlier this week he knocked wide receiver Jarius Wright to the ground in the back of the end zone with a vicious blow to the upper body — one that might have collected a fine from the league had it happened in a game situation. Wright remained on the ground for almost a minute before getting up.

He returned to practice a short while later.

Panthers wide receiver Devin Funchess immediately yelled at Gaulden after the play, saying “that’s what we talked about — you have to know better.”

Coaches later called Gaulden aside to reprimand him.

“Hey, that’s going to be very suspect because it falls right into the ram, butt and spear idea of using the helmet,” Rivera said. “So we’ve got to make sure these young people understand it.”

“You want to play aggressive out here and you want to go full speed and get a game-time simulation,” Kalil said. “We want to be smart. I think what we can do as veterans, and as players, is we have a guy who is about to fall we want to keep him up and keep him off the ground. But it’s hard because there are a lot of guys flying around out here.”

Panthers cornerback James Bradberry said there is a contact on every play.

“It’s very tough because one of the key components of making a Super Bowl run is having everybody healthy. And when you have prominent guys go down, it’s tough,” Bradberry said. “You’ve just got to have that next-man-up mentality. And that’s what we have here.”