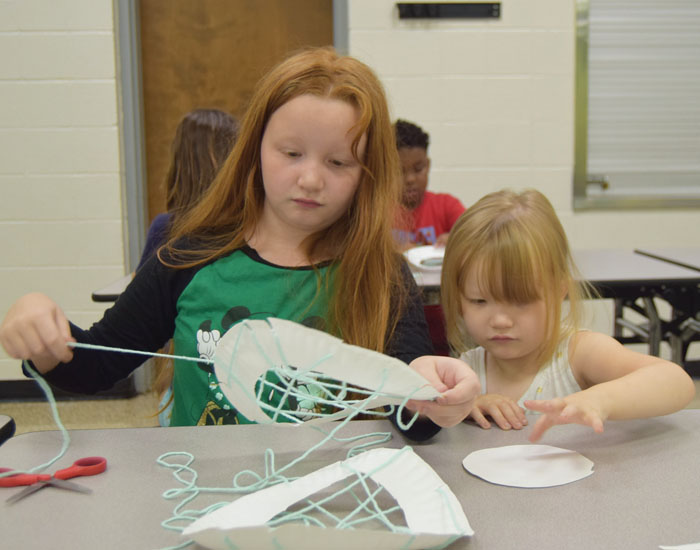 Kaleigh Packard, left, and younger sister Kendra, left, work on a craft together. North Rowan Elementary has opened its doors this summer, offering a camp to children of all ages at no cost. Free lunch is provided through Rowan-Salisbury School's Summer Meals Program. Rebecca Rider/Salisbury Post

SPENCER — School can be a haven during the summer months for some students. As temperatures rise and humidity increases, many children have chosen to take shelter at North Rowan Elementary School each day during their break.

For the first time, North Rowan Elementary is running a summer-long camp for children ages 4 through early teens. It’s a program that came about after Spencer’s only Summer Meals Program site was unable to open this year because of a lack of volunteers. Concerned that students wouldn’t have access to regular meals over the summer, Bryant and her team stepped in.

The seven-week camp is also unique because it provides transportation. Thanks to donations from the Spencer Board of Aldermen and Life Church, a bus picks up students at roughly five stops around town and returns them there each afternoon. Bryant estimates that more than half the school’s campers are able to come only because of the transportation.

Camp weeks run Tuesday to Thursday for about three hours a day. During that time, children learn, play outside and participate in crafts. Joy Childers, camp organizer, explained that each week follows a theme. One week, students might study animals, coding or the human body — but they always have a good time.

“It’s actually really, really fun here because you get to spend time with your friends and have fun,” 9-year-old Kaleigh Packard said.

The Summer Meals Program is funded by the U.S. Department of Agriculture and is open to any child between ages 3 to 18. So while any student could come eat at the school, initially organizers considered opening the camp only to North Rowan Elementary students. Community residents, however, asked for something more.

So the school decided to open it to all students — regardless of age or where they go to school.

“We wanted to provide a place where kids could be kids,” Childers said. “… We couldn’t turn them away.”

Organizers welcomed children with open arms — something that’s proved beneficial for the youngest of the crop as well as the oldest. Not only are young children getting exposed to school and a taste of learning, older students are learning responsibility and how to be leaders.

The camp is possible thanks to help from local organizations like the town of Spencer and Life Church and the army of volunteers who show up every day.

“We would have been able to run the camp without volunteers,” Childers said.

“It provides what our little town needs, our community,” Bryant said of the camp.