James B. Carter: After the teachers’ march, what’s next? 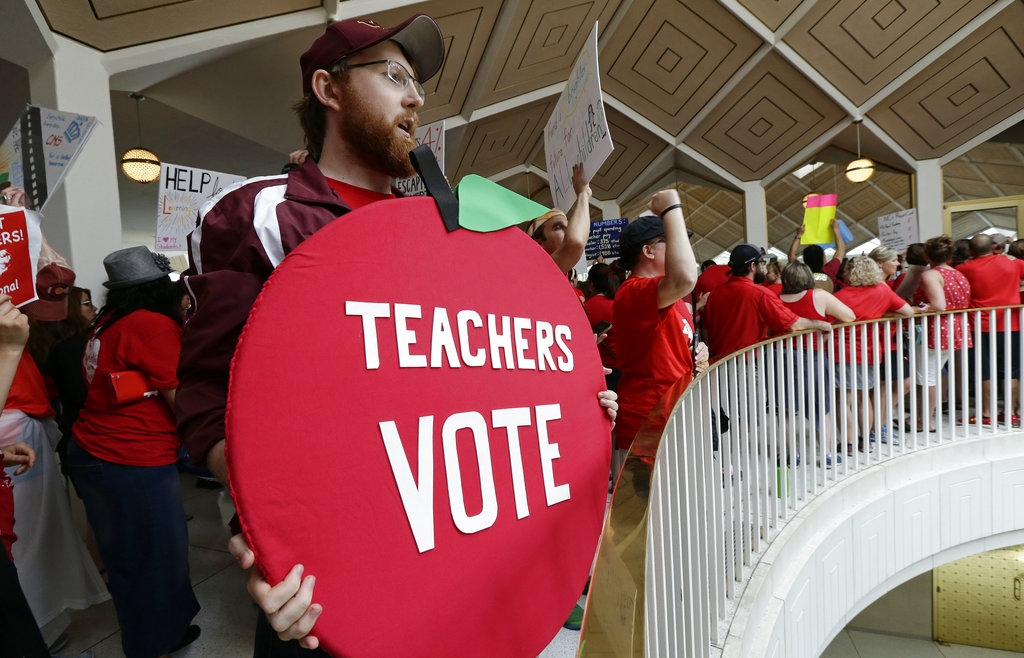 Kevin Poirier, an educator from West Charlotte school, gathers with other educators during a teachers rally at the General Assembly in Raleigh, N.C., Wednesday, May 16, 2018. Thousands of teachers rallied the state capital seeking a political showdown over wages and funding for public school classrooms. (AP Photo/Gerry Broome)

On May 16, approximately 30,000 educators marched to the State Legislature in support of greater per-pupil funding, better teacher pay and more appreciation for teachers and public education. The “Rally for Respect” drew people from across the state, and many forward-thinking districts, including Rowan-Salisbury Schools, helped their communities make arrangements such that teachers could attend and students with testing needs or the need for a hot meal would be taken care of. Statewide, surveys indicate overwhelming approval and support for the march and for boosting funding for schools and teachers.

However, the current North Carolina Legislature is notoriously cool to traditional public education. Under its leadership, the state has seen an increase in charter schools and voucher programs that take tax payer money away from public education. Indeed, charters can take a student’s per-pupil allotment, kick out that student if they appear to hurt the school’s academic rating, and never have to give that money back.

Let it be known that many of the so-called education reforms the Republican-heavy current legislature has supported were also favored by corporate Democrats at the local and national levels before the Republicans gained control.

The Legislature remains, but the march has passed. Those who marched may be asking “What next?” Here are some logical next steps area educators might take, and some actions the Rowan-Salisbury Association of Educators (RSAE) may take, between now and November, when many important elections will determine education policy:

• Vet local and state political candidates for pro-public education stances. RSAE defines such stances as those that support K-12 public schools and do not favor vouchers. As well, RSAE prefers candidates to support traditional K-12 schools over charter schools or to at least expect charter schools to play by the same rules as true public schools.

We have state House and Senate races to consider by November, and school board elections too. I hope to see school board candidates who supported the right for teachers to march in Raleigh and who do not belittle the public with talk of being “for the children first.” All teachers are students-first advocates already, and this can go without saying. Candidates aligned with the mission of the May rally are good candidates.

• Canvas for candidates who do support public education and register to vote and help others register. One pleasant surprise I had while at the march was seeing several seniors from Carson and South Rowan high schools in attendance. Each had an interest in teaching, and each was inspired by the rally to feel empowered. We know a wave of first-time voters and young voters could be enough to sway close elections. Focusing on candidates’ stance on public education as a top priority can help RSS move forward.

• Embrace educators’ voice: Blog, tweet, write letters and columns for local media; schedule face-time with local television outlets to tell your story if you are a public educator. If you are not, encourage teachers to do so. One reason our schools are not better funded is because too many of us have been too quiet for too long. An activated voice is an empowered voice, and if the government is still a megaphone for the people, all of us who want a world-class education where schools are funded at least to the national average and teacher pay is attractive enough to attract and retain top talent need to make sure those who can or will make policy hear us. I am sure The Salisbury Post wants to hear you.

The March to Raleigh began a movement. Now is time for the march to November.

James B. Carter teaches at Carson High School and is vice president of the Rowan-Salisbury Association of Educators.