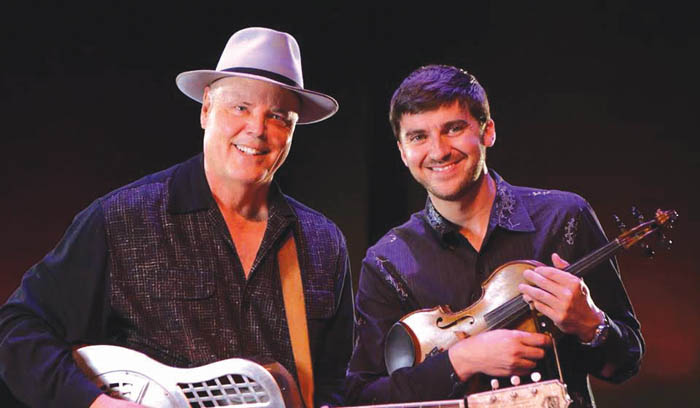 Holt and Goforth bill themselves as a 'two man tornado of tales and tunes.'

SPENCER — The N.C. Transportation Museum will feature musician, storyteller, and television host David Holt as he performs Aug. 3 with musical partner Josh Goforth during a concert in the historic 1905 Back Shop.

Holt is a famed collector, purveyor and historian of Appalachian Mountain music, a four-time Grammy-Award winning musician, and the host of Great Scenic Railway Journeys, Folkways, and David Holt’s State of Music on American Public Teleivison. 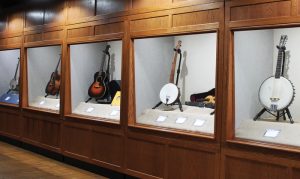 Holt and Goforth bill themselves as a “two man tornado of tales and tunes.” The 7 p.m. concert will include old time mountain music and railroad songs, befitting the historic surroundings provided by the museum, which sits on the grounds of the former Spencer Shops railroad facility.

The pair combine the virtuosic sounds of guitar, banjo, fiddle, slide guitar, and mandolin with a world of exciting rhythm instruments. Goforth is descended from many of the old-timers Holt learned from in the late 1960s in Lonesome Mountain, NC. Audiences of all ages are treated to a show exploding with creative energy, fun and amazing musicianship.

Preceding the show, at 6 p.m., Holt and Great Scenic Railway Journeys’ creator Robert Van Camp will appear to chat with fans and sign autographs. Great Scenic Railway Journeys has appeared on American Public Television across the nation for the past 25 years. Copies of the 25th anniversary episode, primarily filmed at the museum, will be available for purchase on site, or as part of an upgraded ticket offering. A very limited number of those upgraded tickets remain.

Full ticket information and purchase options for the meet and greet and the Aug. 3 performance by David Holt and Josh Goforth are online now at www.nctrans.org. Information and tickets are also available by calling 704-636-2889.

Holt is currently featured at the museum in a photographic exhibit titled “Mentors and Heroes.” The exhibit includes more than 30 framed black and white portraits of Holt’s many musical mentors and heroes in photos he took between 1974 and the early 2000s. Among those featured are Madison County ballad singers Dellie Norton, Cas Wallin, Berzilla Wallin and Sheila Kay Adams, whom Holt met when he first came to western North Carolina in the 1970s. Doc Watson, considered Holt’s most essential musical influence, receives a special focus.

The exhibit also includes several instruments from Holt’s personal collection, including the “Tree of Life” open back banjo custom made by Bud Soesby and a 1953 Gibson once owned by the “Grandfather of Bluegrass” Wade Mainer.
“Mentors and Heroes” is available with regular admission and will remain until Sept. 3. More information can be found online at www.nctrans.org