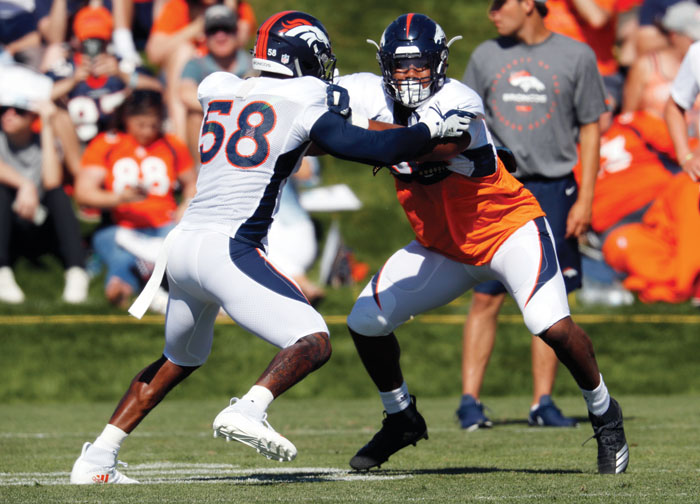 ENGLEWOOD, Colo. (AP) — The Denver Broncos are singing the praises of rookie outside linebacker Bradley Chubb even if carrying a tune isn’t necessarily his specialty.

The No. 5 overall pick recently paired with fellow rookie Courtland Sutton to perform a duet in front of the team.

“I messed up the lyrics a little bit,” Chubb said.

No big deal. They didn’t bring him in for his voice, just his voracious intensity. In that respect, he’s hitting all the right notes.

Chubb believes this group of pass rushers can create quite a bit of “chaos” this season. The defense even has a scheme dubbed “NASCAR” to take advantage of the speed and power of Chubb, Von Miller, Shane Ray and Shaquil Barrett. Simply put: It gets all of them on the field at the same time to wreak havoc.

“Now that will be dangerous,” Ray said. “You can’t block any of us one-on-one. It would be too tough, especially if you have all four of us in the game. We have the guys to get a lot of sacks this year.”

Chubb was a surprise pick by the Broncos mainly because he wasn’t predicted to fall to them. Miller even posted his reaction on Instagram — complete with a scream.

So far, the 6-foot-4, 275-pound Chubb has been just as advertised through training camp.

“What we saw in college we’ve seen some out here,” coach Vance Joseph said. “Watching him play versus NFL tackles and tight ends, it hasn’t been a setback for him. He’s a strong guy. He can set an edge. He can rush the passer.”

The pressure to produce out of the gate doesn’t faze Chubb in part because he has Miller & Co. next to him. The 22-year-old is all ears these days in meetings and on the field. He’s taking in every piece of advice offered to him to get up to speed.

“I just need to keep coming out and working,” said Chubb, who had 26 sacks, 203 tackles and eight forced fumbles while at North Carolina State. “Having a lot of rushers and a lot of good players who can get to the quarterback out there on the same field and at the same time, I feel like it’s going to be chaos.

“That’s what we’re trying to do, cause chaos.”

Chubb’s versatility allows defensive coordinator Joe Woods to get even more imaginative with his schemes. Woods plans to use Chubb at outside linebacker, defensive end and even drop him into coverage.

About his singing: Turns out Sutton and Chubb elected to do a number together for their teammates. Sutton presented several songs and Chubb didn’t know any of them. Finally, they found common ground with “Can You Stand the Rain,” a ballad by New Edition . It went rather smooth, outside of a few lapses on lyrics.

“We got a little standing ovation,” Sutton said.

Now on to the next rookie ritual: The funky haircut . The veterans get to have a little fun with the razor and trim the hair of the rookies. Or, if a rookie would rather, the eyebrow is always an option.

“I’m not looking forward to it,” Chubb said.

What he is looking forward to is rushing QBs.

“We’re all coming out here with the same mindset,” Chubb said. “We all want to be great and we’re pushing each other to be great. When we’re all going, it’s going to be pretty special.”

NOTES: TE Jeff Heuerman and DB Su’a Cravens were held out of practice Wednesday with knee ailments. … TE Jake Butt didn’t participate in all the reps as he makes his way back from a knee injury.

…. The Broncos have a day off from training camp Thursday. “We want those guys to stay off their feet and rest,” Joseph said.