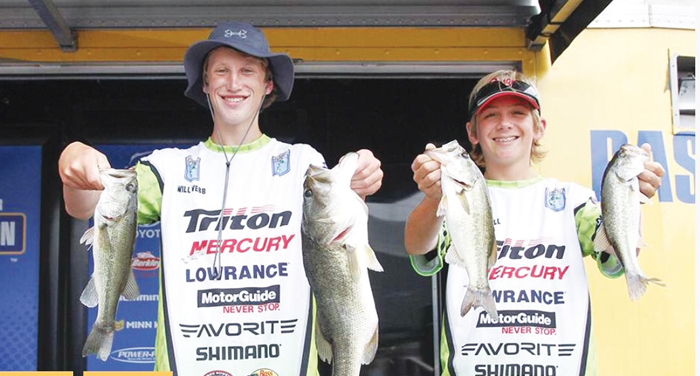 Submitted photos At the Bassmaster Junior Championship in Huntingdon, Tenn., Salisbury Academy’s Will Webb, left, and Harrison McCall, right, competed, after winning the state championship at Lake Norman in April.

HUNTINGDON, Tenn.  —  You know it’s a big event when a choral group belts out the national anthem before bags of flopping fish are weighed.

Four local youngsters participated in an epic event on Tuesday and Wednesday —  the Bassmaster Junior Championship in Huntingdon, Tenn.

Webb and McCall won the state championship held on Lake Norman April 21-22, while the team of Alexander and Hammond also qualified for the nationals with a runner-up finish

The state provided colorful fishing shirts for its four representatives.  The boys returned home today without trophies or scholarships, but they did latch on to lifetime memories.

“All the rest of my life, I’m going to remember everything about these two days,” said McCall, a rising eighth grader at Salisbury Academy. “The lake, the weigh-ins, all of it.”

The format was simple. The limit for each of the 54 teams was five fish per day, with the stipulation that each counting fish had to be a keeper of at least 12 inches in length. Most of the bass that were hooked weighed  between 1 and 2 pounds, but there also were some monsters. In a practice session prior to the tournament, a 14-pound bass was landed. During the tournament, the largest fish lugged to the scales weighed 7 pounds, 1 ounce.

Those 54 participating teams came from everywhere, mostly from the South, but also from Colorado and Connecticut, from Maine and Minnesota, from Indiana and Iowa. Some teams have catchy names, such as the Fighting Fish Sticks.

While 53 teams were Americans, the 54th hailed from Ontario, Canada, more than 1,ooo miles away. For the local anglers, the trip to Huntingdon seemed like 1,000 miles, but it was actually 537, a straight shot across the mountains on Interstate 40.

“It took us 10 hours to get there,” said Barry McCall, who served as the boat captain for the fishing efforts of his son, Harrison, and Webb, a tall youngster who will be a freshman at Salisbury High. “Part of that was terrible traffic, getting through Nashville. Huntingdon and Carroll Lake was about two hours further west once we got through Nashville.”

The fishermen spent two marathon days on the water. Those days began when it was still dark. Fishing ended at 1 p.m., with weigh-ins at 2:30 p.m.

Weather conditions were favorable for fishing on Day 1, Tuesday, when it was a pleasant 80 degrees with cloud cover and overcast skies.

On Tuesday afternoon, McCall and Webb proudly placed a green bag with four keepers in front of weigh-master Jon Stewart, the director of B.A.S.S. Nation. Their total weight was 6 pounds, 3 ounces, and they were 19th on the leaderboard.

McCall and Webb held up one fish for the cameras that looked extra long and large, but Stewart pronounced it the “skinniest fish in the lake.”

Alexander and Hammond managed to net three keepers on that first day, with a combined weight of 3 pounds, 9 ounces. They were in 42nd place.

Wednesday’s conditions were different. “Bluebird skies” is the popular expression.  Hot with bright sunshine, which means less than ideal conditions for fishing.

With the sun beating down and temperatures steaming in the mid-80s, it was a challenging day on the lake for the McCalls and Webb.

“It was a really tough day,”  Barry said. “Harrison and Will caught a lot of fish, must have caught a dozen, but they were a hair short of 12 inches. Some of them had to be 11 and three-quarters, but rules are rules.”

As the boat captain, Barry McCall wasn’t permitted to do anything physical. All he could do was operate the boat and offer advice.

“Wednesday was a long day, it really tested my patience,” he said. “You want to pick up a rod and reel  and give it a try, but you can’t.”

The team tried everything on Wednesday. Nothing worked. Luck never changed.

“We went all over that lake,” Barry McCall said. “We tried every depth and every lure.”

The team snagged just one keeper on Day 2, and it was a modest 14 ounces.  Harrison caught it with a Carolina rig lure in about 20 feet of water.

The team tumbled down the leaderboard to 39th place and  will remember the big ones that got away.

“We got bites from two big ones on Tuesday, 3 or 4 pounds, and we had another big one early in the morning today,” Harrison said. “We  just couldn’t get a big one in the boat.”

Bass fishing is challenging. Just because a bass is hooked, doesn’t mean it’s going to be landed.

“Those bass are fighting for their lives and they are big, strong fish,” Barry said. “They jump, they twist, they’ll break your line. There’s a reason they call this sport fishing, not catching.”

The team of Alexander and Hammond had success on Wednesday, They bagged their limit of five keepers, averaging a pound apiece, and soared up to 30th place in the final standings.

The first-place team on the leaderboard occupied the “hot seat” as Wednesday’s weigh-ins progressed. A Virginia team led for a while. Then a Louisiana team took over for a long stretch.

In the end, a team from Illinois won it all with a two-day haul of 17 pounds, 6 ounces. That duo edged a Florida team  by the narrow margin of one ounce. The winners received $2,000 in scholarship money, while the runners-up got $1,000.

All the fish that were caught were released back into the lake. Not all will survive, but many will.

But this was a story about human beings.

Barry McCall was a fine football and baseball player at East Rowan in the late 1980s. He also was an avid fisherman in his youth, but the responsibilities of family and work came along when he was in his 20s, and the rod and reel eventually were stashed away in a closet.

His son’s passion for fishing brought him back into the sport.

“I got interested in fishing two or three years ago because some of my friends were really into it,” Harrison explained. “I knew my dad used to fish, and when I started fishing myself, he got excited about it.”

Harrison plays multiple sports at Salisbury Academy — basketball, soccer and golf — and also plays on a travel baseball team. Will has a background in soccer, basketball and golf, but for both of them, bass fishing has moved to the top of the list.

“As tough as those two days were, this was just a great experience for all of us,” Barry said. “We didn’t win, but we were there.”

Former Wolfpack player Chubb hitting all the notes in…