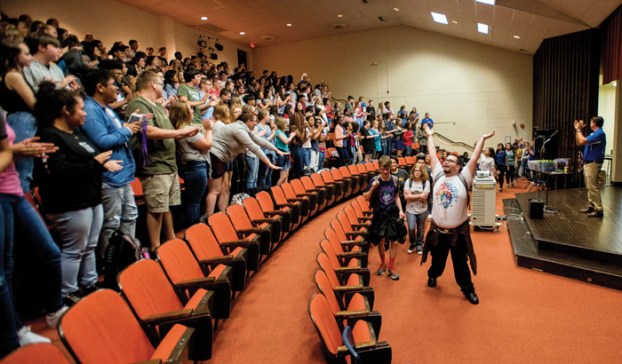 SALISBURY — Loud chatter and cheers could be heard in the Rowan-Cabarrus Community College auditorium Wednesday morning.

“You guys are excited to be here, aren’t you?” said Principal Patrick Hosey during Rowan County Early College’s opening assembly for the new school year.

The early college program has been operating at RCCC for 11 years.

Students enter early college as freshmen and continue through their senior year. As freshmen, most of their work is high school courses, but as they advance to junior and senior years, they begin to add more general education college courses to their workload.

By the time students finish the program, they have not only earned a high school diploma but also an associate degree. Students participate in their own high school graduation, as well as the community college graduation.

To apply for early college, students must fill out an application and write an essay. After those are reviewed, students are interviewed by early college teachers. They are then randomly selected through a lottery process.

Rorie Jenkins, a junior, moved excitedly around the auditorium before the assembly began, talking to teachers and peers and introducing herself to freshmen.

Jenkins heard about early college when she was in middle school and was encouraged by her guidance counselor to pursue the opportunity. Jenkins said she loves the fast pace of early college and the relationships she has built at the school.

Jenkins said early college has given her practical tools for her life outside college. She said that along with her normal classes, she has participated in seminars about how to do taxes, how to apply for college, and how to write a cover letter, as well as learning interviewing skills.

History teacher Theresa Pierce said early college has many benefits for students such as cultivating personal creativity and deep relationships with teachers that last all four years of high school.

“If you are into something, you’re allowed to pursue it,” said Pierce.

Pierce said it is rewarding to see students who are passionate about learning and building relationships with the teachers.

“The kids tell me I’m like a grandmother to them, and I take that as a compliment,” said Pierce with a laugh.

Principal Hosey has been at the school for three years. He said that recently Rowan County Early College has been working to cultivate a sense of school spirit. Last year, students acquired a spirit rock for the school.

Hosey said the benefits of early college are endless. Students earn two degrees, learn about college etiquette such as emailing teachers and having respect in the classroom, and are given academic freedom in an encouraging and welcoming environment.

During the assembly, Hosey spoke to the students about being motivated and academically responsible.

“You chose a path that’s very different, but you chose it for a reason … I ask that you take that and run with it,” said Hosey.

CHINA GROVE — It’s been a long wait, but South Rowan High School’s ROTC tower is rising from the ashes at... read more