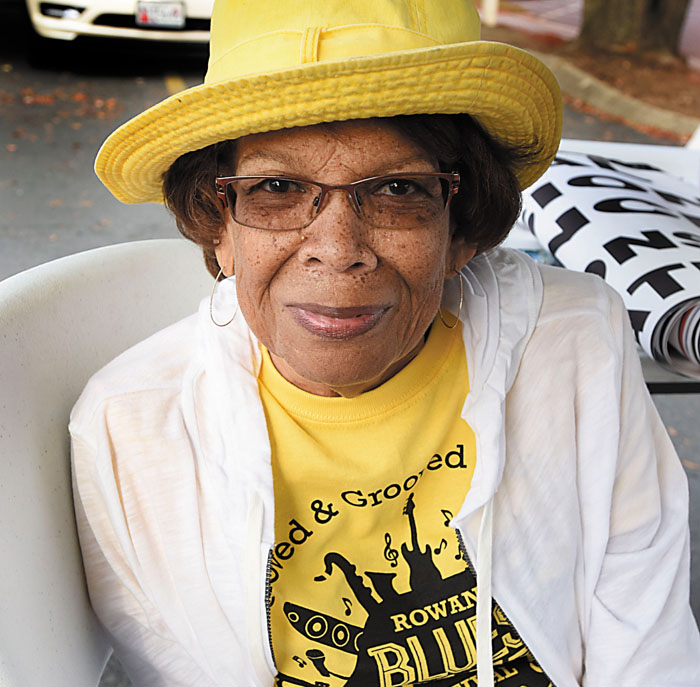 Eleanor Qadirah at the Blues & Jazz Festival. Photo by Wayne Hinshaw, for the Salisbury Post

SALISBURY — When Eleanor Qadirah was growing up, the train station in Salisbury was segregated with separate ticket windows and water fountains for blacks and whites.

Back then, she was being raised by her aunt and uncle, and sometimes when her aunt’s back was turned at the depot, Qadirah would sneak drinks from the “white” fountain because the water was colder.

Just in that brief anecdote, you see a hint of the woman Qadirah would become.

Qadirah also recalled once the “benefits” of having to walk the steep steps to the balconies of segregated movie theaters downtown. From there, she said with her often mischievous smile, you were able to throw popcorn over the side.

She passed away in a Concord hospice house, just after moving there from Carolinas HealthCare System-NorthEast, where she had been hospitalized last week.

Whenever local reporters wanted a story about Kwanzaa, an African-rooted commemoration of heritage and togetherness, they contacted Qadirah, who celebrated the holiday.

Bonnie Pullen, Qadirah’s cousin from Baltimore, said Eleanor was “a no-nonsense kind of person” and strictly business when it came to organizing the next festival.

“She was always opinionated, but she always got things done,” said Pullen, who is in Salisbury staying with Qadirah’s 96-year-old mother, Ruth Booker, and making arrangements for Eleanor’s memorial service.

In putting together information on Qadirah’s life, Pullen said she was surprised at all the things her cousin had accomplished and been recognized for in Salisbury alone.

In her work life spent away from Rowan County, Qadirah wore the hats of a therapeutic dietitian, educator, mentor and social worker. But in retirement here in Salisbury, she was best known for the annual jazz and blues festival, usually held in the fall.

It brought artists young and old to the city. At some of the festivals, she also featured storytelling.

Pullen said the blues and jazz festival kept Qadirah going. “She loved the festival so much,” Pullen said, “and she just wanted people to enjoy themselves. She was so proud of that.”

They first met when both were visiting an ailing Jackie Torrence, the late storyteller. They also participated in water aerobics at Rufty-Holmes Senior Center.

Napier said Qadirah reminded her a bit of her own father. Both had good hearts and both could be bull-headed at times.

“She wanted to make a mark in the community for good,” Napier said, adding that Qadirah especially promoted young people, who often sent her recordings hoping she would consider them for the festival or connect them to other venues.

Of all the festivals she organized and produced, Qadirah particularly liked the one in 2010 when the festival featured the Triad Youth Jazz Society of Greensboro.

“The young band members looked so happy to see a diverse audience that showed its appreciation of their performance,” she told Salisbury the Magazine in 2016.

Asked then why the festival is important to Salisbury, Qadirah said, “It allows residents who are unable to drive to the larger cities to experience major performers live and get to buy an autographed CD.”

Qadirah also had a big spot in her heart for Prevent Child Abuse Rowan. Napier said she drove Qadirah by the organization’s place recently so she could see the progress on a new building.

Qadirah didn’t like gossip or back talk, Napier said, and she admired people who made a stand for the human race by being a vibrant force in the community.

“I’m devastated,” Spencer said Wednesday. “I certainly will miss her.”

Qadirah was almost a 30-year survivor of spinal cancer, “a very serious form that children generally suffer from,” she told Salisbury the Magazine. When she was diagnosed, Qadirah was living in New York.

Spencer said Qadirah always gave credit to Sloan-Kettering Cancer Center and a good health insurance plan for saving her life back then. “But I’m sure she walked around every day of her life in pain,” Spencer said.

Qadirah told the magazine in 2016, “I have spent many hours with cancer patients, advising them about what I have learned during the healing process that is constant.”

“When my doctor announced that I had a tumor and that some are good ones and others are bad ones, I said to her, ‘Well, I know I have the good kind.’ She said, “No, Eleanor, you have one of the bad ones.'”

Spencer said she and Qadirah had many late-night conversations because they were both night owls. “She certainly gave me a different perspective on things from time to time,” Spencer said.

Spencer worked with Qadirah on the J.C. Price High School and Dixonville Cemetery committees. Spencer helped her with brochures and other tasks for the blues and jazz festival.

One of Qadirah’s big wishes was to see the Price High gymnasium renovated so it could host community gatherings again.

In 2015, when the J.C. Price Alumni Association had a reunion, Qadirah purposely scheduled a Friday night fish fry at the back of the school so alumni could see some of the old structure’s needs and improvements that had been made.

Spencer said Qadirah was among the founders of the computer club at Rufty-Holmes Senior Center, where her mother has been a regular participant for years. “She was very innovative,” Spencer said of Qadirah. “She would call and tell me all the new things.”

A reporter once asked Qadirah what her pet peeve was.

“Younger people assuming that I may not use a computer or have an email address,” she said. “I would not have coordinated and planned our outstanding festival without my computer, the internet, and great volunteers and supporters.”

Qadirah was named for Eleanor Roosevelt. She was raised in East Spencer by her aunt and uncle, Irene and George Booker, while her mother moved to Philadelphia, then New York to make a living and send money and gifts back home to Eleanor.

She always spoke highly of her fifth-grade teacher, Doretha Williamson, whom she described as “a mean one” but also a great mentor who emphasized writing and organization.

Qadirah said once that to listen to the music she liked, she had to tune late at night to a Nashville radio station that played rhythm and blues.

When she was a child in East Spencer, the block she lived on had only one television and she remembered being thrilled in later years when occasional black acts such as Ray Charles or the Temptations would appear on the Sunday night “Ed Sullivan Show.”

After graduating from Price High in 1960, Qadirah attended N.C. Central in Durham and participated in sit-ins at lunch counters and movie theaters. But she told a reporter in 2004 that she was careful in those days.

“I made sure that I didn’t do enough to get arrested,” she said, because she didn’t wish to jeopardize her summer job back at the VA hospital in Salisbury.

Qadirah moved to New York after college and worked as a teacher trainer and home economics teacher from Chinatown to the Rikers Island Detention Center. She earned a master’s degree from John Jay College of Criminal Justice and volunteered in the prison system as a home economics teacher.

She retired and moved back to Salisbury in 1995, saying she returned to supervise her mother, Ruth, known as “the Hat Lady” for the many turbans, rain hats and granny bonnets she made.

Over her life, Qadirah lived in Baltimore, New York City, Buffalo and Taylorsville before returning to Rowan County.

The Blues & Jazz Society website lists Oct. 20 as the date for this year’s Blues & Jazz Festival, but because of Qadirah’s deteriorating health, friends aren’t sure just how much she planned.

“She was working on it, but she was too weak; she was just too weak,” Napier said.

Memorial arrangements are still being made. Napier said Qadirah didn’t want the preacher “to waste people’s time,” but she also hoped for a eulogy that was meaningful and positive.

Inspiration could come from her senior quote in the J.C. Price High yearbook.