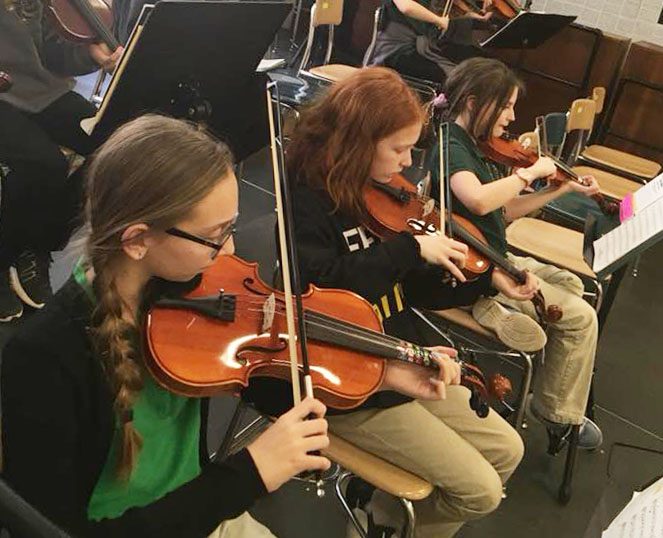 LANDIS — A recent grant means that the Corriher-Lipe Middle School orchestra can purchase its own instruments.

The orchestra, which is just a year old, had participating students rent their instruments or borrow them from the Salisbury Symphony Orchestra during the 2017-18 school year.

“(The symphony) had something where they had instruments for us to borrow. But we realized that arrangement wouldn’t work permanently,” said Kelly Nelson, the hschool’s chorus and strings teacher.

This year, the school has received a $3006.22 Music Education Outreach Grant from Sigma Alpha Iota Philanthropies, an international music fraternity.

The money will be used to purchase several new instruments for students to use in the coming year. The grant is offered only once every three years.

When Nelson was asked to start an orchestra at Corriher-Lipe, she said her reaction was, “Why not?”

“It’s just something different. It’s something kids don’t ever get a lot of,” she said.

It was also a music experience Nelson herself never got to have in school.

“It brings something different to the kids that aren’t exposed to that, and it makes it unique,” she said.

The program has changed from its inception.

“It was initially pitched as a partnership with the Salisbury Symphony,” Nelson said.

But the symphony’s involvement last year was limited because of extenuating circumstances. Nelson said she hopes to strengthen the relationship in the upcoming year.

About 14 students joined the orchestra last year. Most students, Nelson said with a chuckle, wanted to play the violin. But with a limited number of violins and a vision to build a full orchestra, they ended up playing viola or cello instead.

The change didn’t bring moods down for long — each student fell in love with hsi instrument before the year was out, and Nelson said the program was a hit.

“I thought it went really well,” she said.

Eventually, Nelson had to work in extra practice times to match her students’ eagerness.

“They would want to come in every morning (before school) and play. … They were really excited about it,” she said.

With the purchase of new instruments, Nelson plans to include a new crop of sixth-graders in the fall. Eventually, she’d like to have extras for instruments like cellos, which are difficult to transport, so that students can have one to practice on at home.

“A lot of time the cellos didn’t go home because the kids couldn’t get them home,” she said.

While the number of instruments is limited, Nelson said where there’s a will, there’s a way, and she plans to accept any student who wants to learn.

“I would make room for whoever signed up,” she said.

The orchestra put on a few performances last year and has several lined up for the 2018-19 school year. For more information about the program or to donate, contact Kelly Nelson at Kelly.Nelson@rss.k12.nc.us.