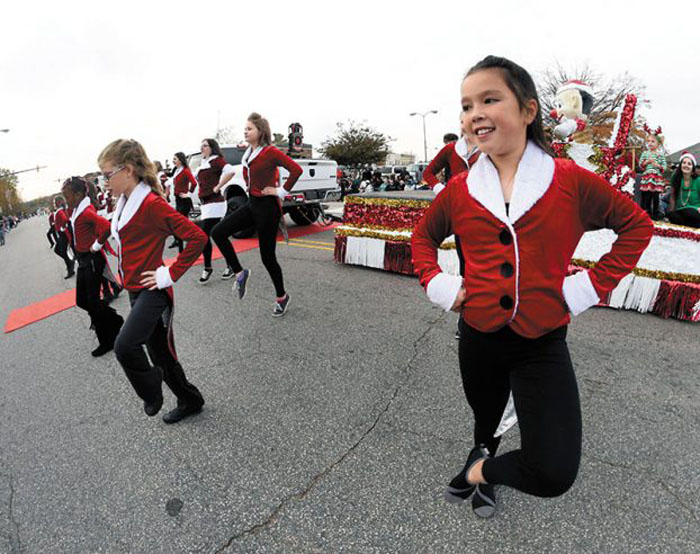 The Holiday Caravan parade has been held for 58 years.

SALISBURY — A day after the board of directors for the Holiday Caravan abruptly announced the end of the annual parade, city officials and a past president of the board said the parade should be able to continue.

In a Tuesday letter to parade participants, the board said it would no longer sponsor the 58-year tradition, citing a controversial incident involving the gay support group PFLAG at last year’s parade as the reason.

Tammy Pinkston was president of the Holiday Caravan board from 2009 until July 13, when she was voted off. She said Wednesday that she believes the community could still have a Christmas parade this year.

She has the timeline, database, program and other information needed to run the parade, she said.

“I’m too old to keep doing this, but I want the community to have the parade,” Pinkston said. “I don’t want to set policies. I’m just there for an information source for a transition year.”

She estimated costs at $30,000 to $35,000, and said the Holiday Caravan had experienced no problems with finances or sponsors. The board decided to pull back, she said, because the majority of board members did not want to allow PFLAG in the parade.

In the November 2017 parade, Salisbury Rowan Parents and Families of Lesbians and Gays, or PFLAG, had several members who wanted to ride on a float and were told they could not. A representative of float sponsor Avita Pharmacy, Veleria Levy, had invited the group to ride the float.

Parade organizers said PFLAG was not listed as a participant on the pharmacy’s original application. In a November 2017 email exchange between Levy and parade organizer Lindsey Sharp, Sharp told Levy she could have whoever she wanted on the float but they could not wear any advertisements other than those for Avita Pharmacy.

Last year, parade organizer Wesley Perry told the Post after the controversy that the parade organizers had the right to decline participation that “does not reflect the mission, vision and values of our organization.”

Salisbury-Rowan PFLAG applied to have a float in the parade in 2014 and 2015. The group was turned down both times. The group reportedly did not submit an application the year after.

PFLAG President Donna Odrosky said the group was disappointed by the recent announcement to discontinue the parade.

“Since the incident in November 2017, PFLAG has asked for and welcomed a dialogue with the Holiday Caravan board, to no avail,” Odrosky said in a statement.

PFLAG’s vision is “a world where diversity is celebrated and all people are respected and affirmed inclusive of their sexual orientation, gender identity, and gender expression,” Odrosky said. “Our mission is to support families, allies and people who are LGBTQ, to educate ourselves and others about issues and challenges that face LGBTQ persons, and to be an advocate in our communities to change attitudes and create policies and or laws that achieve full equality for all people including those who are LGBTQ,” Odrosky said.

Odrosky said PFLAG looks forward to working with a future parade committee whose mission and vision more closely align with PFLAG, the city of Salisbury, the town of Spencer, and event sponsors.

A statement by Avita Pharmacy said it wants to make clear that the company never advocated for the cancellation of the Holiday Caravan parade and was just as surprised about the cancellation as others in the community.

The Avita statement reiterated sentiments from last year, saying it “wished for improved dialogue with the organizers to ensure the parade’s success for all in the future. Unfortunately, that never occurred. While we respect the rights of the Holiday Caravan board to determine what is in its organization’s best interest, we cannot remain silent in response to the reasons cited for its decision and the accompanying accusations leveled against Avita Pharmacy.”

“The board’s letter makes many defamatory and baseless remarks about Avita Pharmacy, including describing Avita’s float entry as ‘full of hate,'” the Avita statement said. “This could not be further from the truth. Avita’s mission is to bring inclusiveness and acceptance to all populations. We always have and always will be advocates for equity and fair treatment for all people and communities. It is woven into our values as a company.

“Avita Pharmacy strongly condemns any harassing or threatening remarks made to the Holiday Caravan board or to our own staff, as such actions have no place in this community.”

The statement said Avita is deeply saddened to see the community so divided by the situation.

“We would love to see the Holiday Caravan parade carry on its long tradition of fun and celebration for the families of Salisbury and to do so in a manner that is welcoming and inclusive of all groups who represent the beautiful and diverse community of Salisbury,” the statement said.

Salisbury Mayor Al Heggins and Spencer Mayor Jim Gobbel sent a joint letter Wednesday to the parade board of directors “in the spirit of unity, hoping that we can work together to continue a parade tradition we all love.”

The letter says both towns have been avid supporters of the Holiday Caravan.

“Your announcement today was a surprise to us, and we are saddened our Rowan community will lose one of its greatest and most beloved traditions,” the letter said.

The mayors said it is of “paramount importance to the city of Salisbury and the town of Spencer that the holiday parade our communities eagerly anticipate continue.”

A spokesman for Food Lion, which had been a sponsor of the parade for many years, said the company never told organizers it was not planning to continue that partnership again this year.

“Food Lion has been proud to call Salisbury home for 60 years, and as such have supported many Salisbury causes and events such as the annual Holiday Caravan,” the spokesman said. “We were recently informed by Holiday Caravan officials that the event will be discontinued but are always interested in exploring opportunities to support events and organizations in our hometown.”