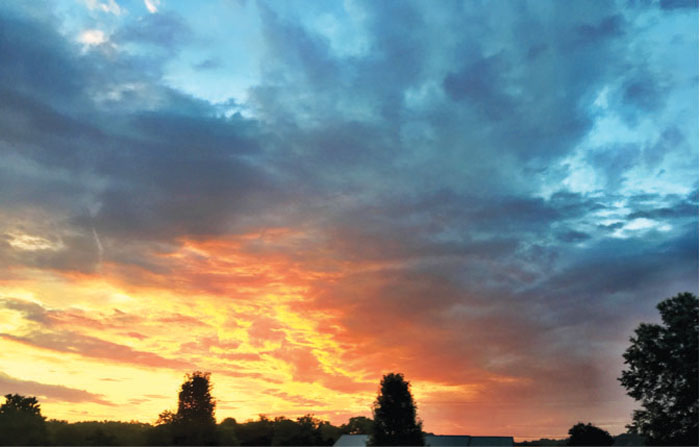 Weather folklore came into existence because ordinary people needed help predicting the weather. They made up rhymes and sayings to help them remember weather patterns.

There is some truth to this phrase, especially in our area where weather systems generally progress from west to east. In the morning, the sun appears above the horizon in the eastern sky.

The sun will likely appear red when the photons (light particles) pass through the clouds that are composed of ice crystals. These clouds can sometimes signal the leading edge of an advancing storm system that can affect the area soon (i.e., cirrus clouds ahead of an approaching frontal boundary).

A red sky around sunset may indicate that fair weather is ahead. If a region is dominated by an area of high pressure, the air sinks. Sinking air can trap dust particles and other fine particulates from your vehicle and nearby industries. These particles can give the sky a deep orange to red iridescent glow in the lower atmosphere.

“If there is a ring around the moon, expect rain or snow soon.”

When a storm system approaches, cirrus and cirrostratus clouds often approach ahead of the main system. These clouds are observed in the higher levels of the troposphere, and they are mainly composed of ice crystals.

A ring around the moon or halo is created when moonlight is refracted through ice crystals or water droplets in the atmosphere. The ice crystals signify high altitude, thin cirrus clouds that usually precede a warm front.

This is an old saying that we hear quite often. However, this is a myth. In fact, lightning can strike the same place more than once in a single thunderstorm.

The more likely places for lightning to strike multiple times are tall buildings and television towers.

“A cricket can tell you the current temperature by the frequency of its chirp.”

This one is true. Crickets, like all insects, are cold-blooded, and the chemical reactions that allow them to chirp are determined by the temperature. Usually, you won’t hear a cricket chirp unless the outdoor temperature is at least 55 degrees.

To determine the temperature, count the number of chirps that you hear in 14 seconds and add 40. This can be repeated a couple of times so that you can get a good average. The accuracy of this calculation is good within 1 degree about 75 percent of the time.

“If spiders are spinning their webs, look for dry weather ahead.”

This is true, since spiders are quite sensitive to changes in humidity. When the relative humidity is high, their webs absorb moisture and can even break. When spiders sense higher humidity, they are apt to stay put.

However, if the humidity is low, spiders will be more likely to spin their webs, and the chances for dry weather conditions are high.

For centuries, we have been using weather folklore to predict the weather. I have tried to cover some of the most popular in this article.

Try making your own predictions with some of these that are still true today.