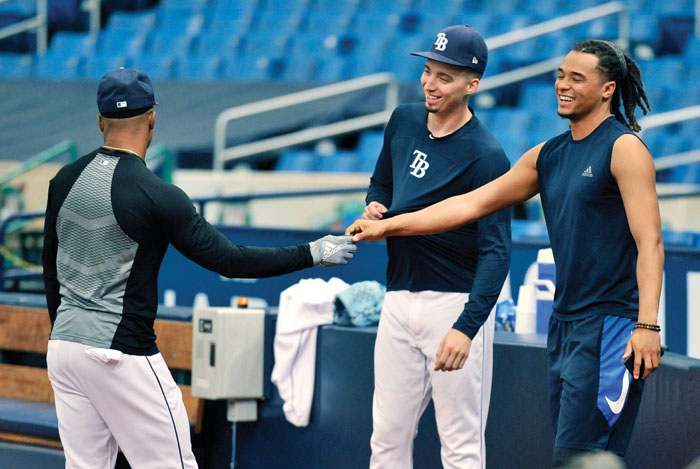 Tampa Bay Rays' Chris Archer, right talks with Mallex Smith, left, and Blake Snell, center, in the bullpen after he was traded to the Pittsburgh Pirates Tuesday, July 31, 2018, in St. Petersburg, Fla. The Pirates bolstered the front end of their rotation at the non-waiver deadline, adding Archer while sending the Rays a couple of coveted prospects in outfielder Austin Meadows and pitcher Tyler Glasnow and a player to be named. (AP Photo/Steve Nesius)

For Brian Dozier, getting traded meant a dash to the airport and a long trip to Dodger Stadium. For Jake Diekman, it was a lot easier — he simply rode the bullpen cart from one clubhouse to the other at Chase Field.

Chris Archer, Jonathan Schoop and a bunch of relievers moved on deadline day, a flurry of 15 swaps Tuesday before time ran out to make deals without waivers.

The trade market kept spinning at a dizzying pace. Every team except San Francisco made at least one deal since the All-Star Game, with Tampa Bay swinging seven.

Archer, a two-time All-Star, hugged teammates at Tropicana Field before heading to Pittsburgh. He is 3-5 with a 4.31 ERA in 17 starts this season, and joins a Pirates club that has pushed back into the playoff race even after trading away Gerrit Cole and Andrew McCutchen in the offseason.

“They’re super-hot right now, and they want me,” Archer said. “I’m excited to be part of the organization that wants me, part of a rich baseball history, a hard-working community. I can’t wait to get there.”

And why not? All but four National League teams began the day within 5 1/2 games of a playoff spot. The American League is more spread out — division leaders Boston, Cleveland and Houston have been busy.

“I think whenever you hear your name or see your name on stuff, you always wonder. But I think that’s just the business side of the game,” Harper said. “It’s part of the game.”

One of Harper’s teammates packed up.

Exactly a year after getting traded from Minnesota to Washington, reliever Brandon Kintzler was part of another deadline deal. This time, the Nationals sent him to the NL Central-leading Chicago Cubs.

“I thought they were joking. I figured it’s not April’s Fools. They called me in, I said, ‘Am I traded?’ They said yeah,” Kintzler said.

“Birthday again tomorrow, so I’m traveling on my birthday again, so that’s great. It is what it is,” he said.

Dozier had been a fixture in Minnesota’s lineup for years. But the Twins dipped this season, and they sent the power-hitting second baseman to the NL West-leading Los Angeles Dodgers for infielder Logan Forsythe and two minor leaguers.

Rather than starting at Target Field in Minneapolis, the 31-year-old Dozier hustled to join his new club as it hosted Milwaukee. He’s now part of a revamped infield for the defending NL West champion Dodgers, who added Machado two weeks ago.

The New York Mets had discussions about their talent-rich young pitchers, who include deGrom, Noah Syndergaard and Zack Wheeler.

“We were not going to move those players unless it involved considerable talent coming back in our direction,” assistant general manager John Ricco said.

Diekman definitely was on the go.

The 31-year-old lefty struck out two while pitching for Texas on Monday night in a win at Arizona. The Diamondbacks reacquired reliever Brad Ziegler from Miami early Tuesday, then boosted their bullpen by getting Diekman from the Rangers.

Wanting to make Diekman’s move easy, the Diamondbacks offered the services of the bullpen cart used to ferry relievers into the game.

“They asked and I was like, ‘Yeah, I don’t want to carry all of my stuff,’” Diekman said.