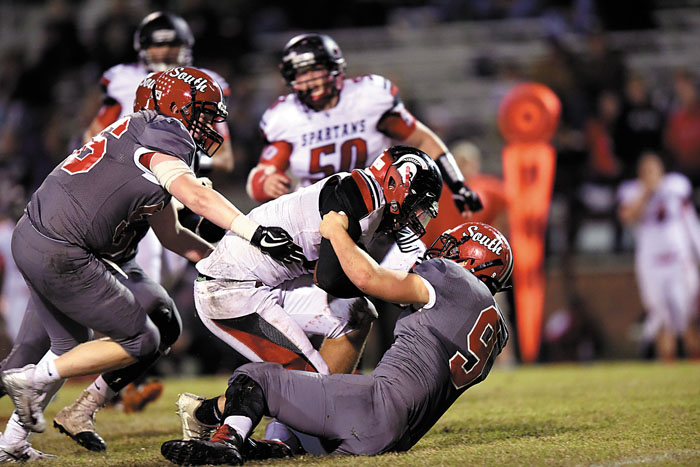 LANDIS  — South Rowan is 13-73 the last eight football seasons, so chatter about taking steps forward is naturally greeted with skepticism.

Cynics point out that South hasn’t been in a playoff game since 2009 and hasn’t won one since 2003.  That’s a significant dry spell.

Still, head coach Daniel Yow, in his fourth season, remains as upbeat as the day he took over the program. He points out South didn’t just win three games last season, it won three of its last five. The last five weeks of the season, South was a winning team. Think about that.

“I can’t say it’s getting easier,” Yow said. “But a lot of people have put in a lot of work year-round.  I know we’re getting better.”

South’s 2017 stats were helped by the deletion of stout neighbor A.L. Brown from the schedule and also were aided  by the shift down to the 2A Central Carolina Conference from the 3A South Piedmont Conference. But the numbers don’t lie: the Raiders were way more competitive last year.  South’s defense improved by 10 points per game, while the offense scored a touchdown per game more than it did in 2016. Frequently, the Raiders were entertaining. Their win against Thomasville was one of the more exciting games of 2017.

So what happens now that quarterback Brett Amburn, who quietly turned in 1,348 passing yards, and big-play returner/receiver Kory Sellers have graduated?

“The nature of  high school football is guys graduate and every team is a brand new team,” Yow said. “You’re always starting over, to some extent, but as much as we’ll miss last year’s seniors, we feel like we can keep moving forward. We set our goals high. We don’t practice as hard as we do because we’re trying to beat the bottom teams in our league. We practice hard because we want to compete with the Ledfords and the North Davidsons for conference championships.”

Yow said players who desired to be captains gave impassioned speeches in front of their teammates at an overnight camp, almost like they were running for class president. The team voted for two veterans who are proven performers — receiver Cameron Hurd and cornerback Scott Stephens. Hurd made third-down catches, while Stephens made third-down breakups. Neither  is big, but they are tough, experienced and fast. Stephens can fly and proved it in a lot of track meets last spring.

“The team could not have chosen better leaders,” Yow said. “Those two guys are always at everything and always on time. They aren’t  just vocal, they’re always vocal in a positive way. Even if a teammate messes up, they’re the kind of guys who will build his confidence back up, not tear it down. That means a lot.”

Inside linebacker Jarrid Nelson, outside linebacker Emilio Bernal, all-county and all-conference DB Christian Reynolds and burly guard Thorne Eagle are other leaders. Running back Demarcus Blackwell, who had 627 rushing yards last year, could be a 1,000-yard workhorse as a senior.

Yow is confident that an addition to the coaching staff will help Blackwell reach that milestone. Patrick Helm, who has been a big part of Hickory Ridge athletics (football, wrestling, softball), has joined the South staff. Yow came to South from Hickory Ridge, and he and Helm have been friends for years. Helm will coach the offensive line and also will have the responsibility of getting offensive play calls signaled in.

South doesn’t have as many athletes as Hickory Ridge did, but South will do its best to simulate Hickory Ridge’s up-tempo offensive style of play. It’s triple-option football, but with a lot more passing than a traditional triple-option team such as Carson.

The new quarterback will be junior Drew Huffman, who was able to spend his sophomore year learning on the jayvees, a luxury South hasn’t enjoyed in recent years. Yow has never been able to build with a junior quarterback. His three previous starting quarterbacks — Heath Barringer, Austin Chrismon and Amburn — were seniors.

“Drew has been throwing the ball well and making all the right reads on the option,” Yow said. “We’re excited about him.”

South’s biggest question is the defensive front, where the starters are new. The strength should be the back seven on defense. They all have experience.

South’s chief concern will be health. While there’s talent on hand, there’s little depth, and guys inevitably get hurt playing football.  South only had 50 players Monday when official practice began.

“We’ll get a few more kids who are dealing with paperwork issues right now,” Yow said. “Our numbers are disappointing, but we can deal with it. Everything about our spring practice, our summer workouts and the first days of practice have been very positive. We may have low numbers, but we’ve had high production and great attitudes. We  can be successful.”

The schedule is friendlier, with Oak Grove, the second-year CCC school, competing in varsity football for the first time. The addition of Oak Grove means nine conference games, so South’s only games outside the league will be against rivals Carson and East Rowan. Subtracted from the schedule to make room for Oak Grove was West Rowan, a school South hasn’t beaten in football since 2000.

South will conduct a “midnight practice” on Saturday morning, the first day contact is permitted.

South will be part of a scrimmage at Cox Mill on Wednesday, Aug. 8. Lake Norman Charter and Union Academy also will be there. It’s a 6-9 p.m. scrimmage that will start with jayvee action.

Then South will participate in the Rowan Jamboree at West Rowan on Aug. 10.  South takes on West Stanly at 7 p.m.

The season opens with a bang — at home against Carson — on Aug. 17.