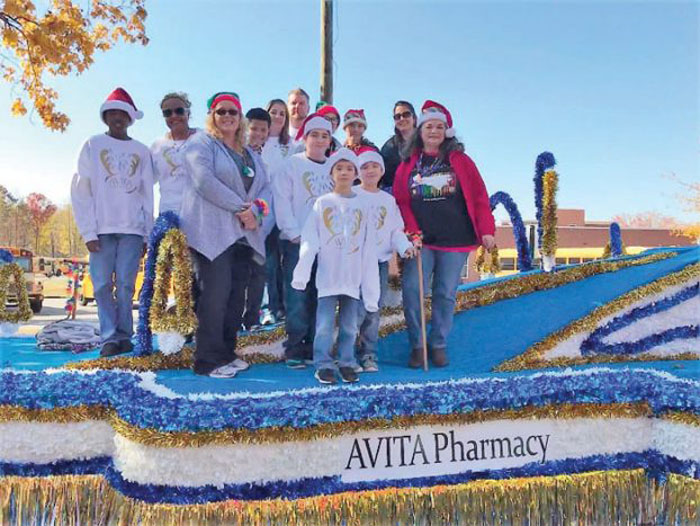 The Avita Pharmacy float was the center of controversy at the 2017 Holiday Caravan. File photo

SALISBURY — After 58 years, organizers have canceled the Holiday Caravan, the board of directors said Tuesday in a letter to parade participants. The end follows a controversy last year when representatives of a gay support group were told they could not ride on a float.

“With saddened hearts, the Holiday Caravan, also known as ‘The Carolinas’ Loveliest and Liveliest Holiday Parade,’ will be no more,” the letter says.

The board thanked everyone for making the parade such a success for many years.

The mayors of both Spencer and Salisbury as well as staff members met Tuesday evening to discuss what could be done to see the popular parade continue this year.

On its website, the Holiday Caravan board provided more details about why it decided to forego the parade. The statement said it all began during last year’s parade.

At the 2017 parade, Salisbury Rowan Parents and Families of Lesbians and Gays, or PFLAG, had several members who wanted to ride on a float and were told they could not. A month before the parade, Veleria Levy, a representative of float sponsor Avita Pharmacy, said she invited PFLAG to ride on the Avita float.

Parade organizers said PFLAG was not listed as a participant on the pharmacy’s original application. In a November 2017 email exchange between Levy and a parade organizer, the organizer told Levy she could have whoever she wanted on the float but they could not wear any advertisements other than those for Avita Pharmacy.

In a letter on the Holiday Caravan website dated Nov. 22, 2017, the board said: “An entry with premeditated, full-of-hate assumptions and lack of knowledge caused a scene that has forever impacted Salisbury historically as far as the future of the Holiday Caravan Parade.”

Organizers say they followed the parade’s policies as they have always done. They said the all-volunteer board members received hate mail, emails and threats to protest the 2017 parade directed to their personal email addresses, home addresses, social media accounts and their place of employment.

“The personal attacks on these people’s livelihoods, local businesses they own, places of employment, and them just as a human being were unprovoked, and no volunteer should ever have to endure something of that nature,” the letter said.

A Post reporter reached out to organizers Wesley and Wendy Perry for comment. A representative of the board responded by social media to say the organizers had no further comment about the matter other than what was provided on the organization’s website and Facebook page.

Salisbury Mayor Al Heggins said she is disappointed and very saddened about the Holiday Caravan board’s announcement to discontinue the parade.

“Please know that Salisbury’s new City Council never made a decision to take over the Holiday Caravan Parade or felt pressured to do so. As a local government entity, our priority is to create welcoming and inclusive environments for all,” she said.

Heggins added that it is her hope that together, “we can pick up the pieces and move forward with a renewed commitment to continue this great tradition for the entire Rowan community.”

“We were really concerned because the plugs had been pulled. This is about kids and families. We spoke together, and we are trying to figure out a way to get a parade going. There’s still a whole lot of things that have to be worked out,” Gobbel said.

Although the announcement to cancel the parade was abrupt, officials of both towns said they appreciate the work of the Holiday Caravan volunteers.

Gobbel noted the parade has been going on for decades and originated in Spencer in 1953, then traveled north.

“It was such a great parade that the city of Salisbury asked to be included,” Gobbel said.

Salisbury Mayor Pro Tem David Post mentioned the parade last year during a City Council meeting and asked whether the city or some other entity should take over events like the parade. Post said Tuesday there will be a parade this year.

Below is the full statement from the Holiday Caravan website (www.holidaycaravanparade.com) on why the annual Christmas parade will no longer be held:

“With saddened hearts, the Holiday Caravan, also known as ‘The Carolinas’ Loveliest and Liveliest Holiday Parade,’ will be no more, due to unforeseen circumstances.

“The Holiday Caravan has been around for 58 years thanks to the dedication of its founders, board members, town of Spencer, city of Salisbury, Salisbury Civitan, our community and especially Food Lion for being a major sponsor for many many years. Without Food Lion’s financial support, the parade would not have been possible for many of those years.

“At last year’s parade on Nov. 22, 2017, an entry with premeditated, full-of-hate assumptions and lack of knowledge caused a scene that forever impacted Salisbury historically as far as the future of the Holiday Caravan Parade.

“Since last year’s parade, the all-volunteer board members have received hate mail, email, and threats to protest the 2018 parade to not only their personal email addresses, home addresses, social media but also to their place of employment. These board members have dedicated their entire lives and heart to this event and every year, some of them for over 30 and 40 years. The personal attacks on these people’s livelihoods, local businesses they own, places of employment, and them just as a human being were unprovoked, and no volunteer should ever have to endure something of that nature.

“This past year, we followed Holiday Caravan’s policies as we have always done. This isn’t the first time we have had to remove an entry on parade day due to noncompliance. Veleria Levy submitted an application as Avita Pharmacy. We have attached her submitted application below. It was approved as Avita Pharmacy. In the days before the parade, Veleria emailed in asking to change her entry to which we responded it was too late to change. Emails are attached as well.

“Veleria Levy decided that she was above policy enforcement (and) that the rules do not apply to her. The entry for Avita Pharmacy originally showed up with nothing showing they were a pharmacy, other than the provided attached sign that comes on their float from our float vendor based on their application. They had 3-by-5 rainbow flags, hand flags and PFLAG banners rolled up on the float.

“A parade representative approached them and told them they could not go through the parade route as anything other than their approved entry as Avita Pharmacy. They refused to change clothes or remove their signs. Participants were given four hours to meet approved entry and chose not to. Therefore, their entry was pulled from the lineup and not allowed to participate.

“There was a staged photo circulating in the media with Avita shirts; those didn’t appear until after their removal — after they stated they didn’t have anything to change into. All the flags and signs they had were not included in their picture — their picture included as well; please notice the oversize sweaters the children are wearing as obviously that was not what they planned to wear through the parade but put on for this photo.

“Attached are also excerpts from the Salisbury City Council minutes and agenda.

“Holiday Caravan Inc., our block logo and the “Carolinas’ Loveliest and Liveliest Holiday Parade” are a registered trademark that will continue as a historic archive. Visit our website at www.HolidayCaravanParade.com.