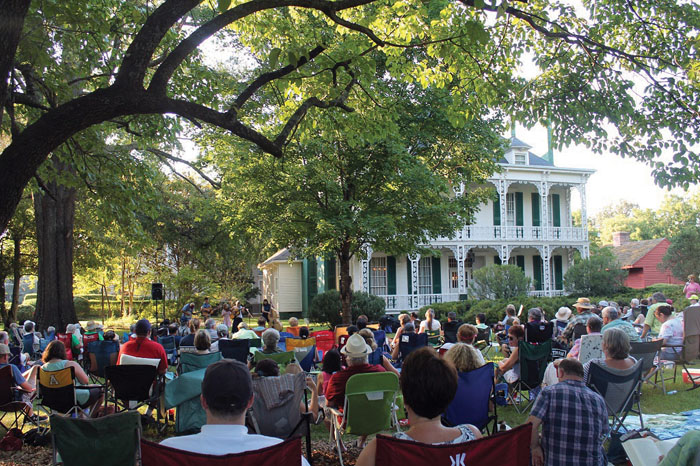 Spreading shade trees and the Hall House on South Jackson Street serve as backdrop for the annual Blankets & Bluegrass. This year's event will be held from 6-8 p.m. Aug. 19. Photo courtesy of Historic Salisbury Foundation

Bring your blankets or chairs, catch up with friends, and sit back, relax and listen to bluegrass music on a summer Sunday evening.

The third annual Blankets & Bluegrass will be held from 6 to 8 p.m. Aug. 19 on the lawn of the Dr. Josephus W. Hall House, 226 S. Jackson St. The concert is presented by Historic Salisbury Foundation.

This year’s lineup will feature locally known young musicians Grace and Gabe Bemus and their band, One Fret Over, as well as Destination Bluegrass of Mocksville.

One Fret Over also placed second out of 47 buskers at the 2017 Salisbury Buskers Bash.

The musicians in Destination Bluegrass have more than 150 years of experience among them and placed in the top 15 out of more than 150 bands in the 82nd Galax Fiddlers Convention in 2017.

The concert is free, but reservations are required. The foundation is asking those attending to consider a $10 donation “to help keep the event accessible to everyone.”

The online reservation form can be found at www.historicsalisbury.org under the Events tab.

New this year is the Rustic Roots food truck with fresh, locally sourced dinner offerings. Also new is The Chill with all-natural flavored ice to help people cool off on the summer evening.

The foundation also will offer craft beer and wine for purchase. People are welcome to bring their own food and beverage for a picnic.

The foundation encourages those attending Blankets & Bluegrass to arrive early to venture inside the Hall House, where docents will answer questions.

The Hall House was constructed as classrooms for Salisbury Female Academy. Maxwell Chambers acquired the two-story Federal style frame house for his residence in 1825.

Also on the grounds is the detached kitchen where docent Susie Worcester will be cooking over an open fire. Visitors can sample the recipes from Mary Cowan Hall’s original cookbook.

Foundation volunteers led by Carol Rathbun spent hundreds of hours transcribing the recipes. Copies of the cookbook will be available for purchase.

Historic Salisbury Foundation, founded in 1972, is a private, nonprofit organization whose mission is to preserve, protect and revitalize the historic fabric of Salisbury and Rowan County. To learn more about the organization, visit www.HistoricSalisbury.org or follow it on Facebook.