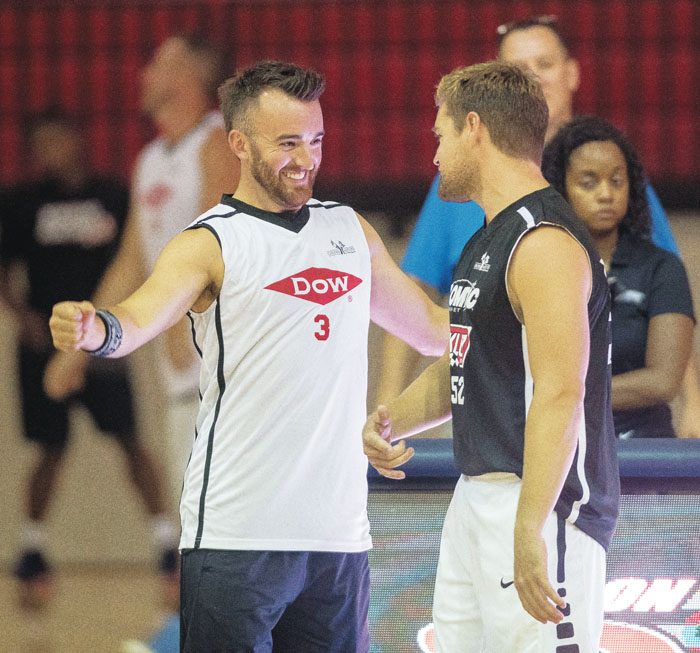 SALISBURY — Thanks to NASCAR’s Austin and Ty Dillon and their ever-expanding circle of friends, Wednesday’s basketball fund-raiser at Goodman Gym wasn’t so much a stop as another chance to go.

The Lexington-based siblings, grandsons of racing icon Richard Childress, took a mid-week break from their structured racing schedule to orchestrate the fourth annual Dillon Brothers 3-on-3 Basketball Tournament — a 16-team, double-elimination tourney used to raise awareness and dollars for the Childress Institute for Pediatric Trauma.

“It’s fun, man,” said Austin Dillon, winner of last February’s Daytona 500 and currently 19th in the NASCAR cup standings. “I just enjoy having all the buddies I’ve made over the years in this tournament. They all enjoy it, but they know it’s strictly for charity.”

It’s a charity that raised a record-$126,000 last year for prevention, treatment, research and education. According to the Institute’s 2017 report, nearly 9,000 American children lose their lives each year because of serious injuries.

“I think, in our own way, we’re helping the cause,” said Ty Dillon, the 26-year old who has had two top-10 finishes this season. “The amount of money we’ve raised the past two years has been substantial. It’s quite a bit more than we were able to do before we started this tournament.”

Robert Gfeller, the Institute’s executive director, explained that “the world is right when kids are playing,” in the report. He added: “We work to help educate players, coaches, trainers, NATA officials and EMS personnel. This event has become very successful for us, thanks to Austin and Ty. If it’s not our top fund-raiser, it’s close.”

“Unless you’ve gone through what some of these kids have, you don’t know what it’s like,” said Silver, a third-time participant. “In a nutshell, this is a lot of people supporting a great cause. And Austin Dillon does not know a stranger. He is one of the best human beings on the planet.”

Hamlin, a four-time team sponsor, suited up for the first time. “It’s the first year I haven’t been hurt,” he reported. “This is great because it lets us be competitive outside of racing. It’s a chance to raise money and do something you enjoy.”

Hamlin’s 2018 season has been less thrilling. He’s currently ninth in the Cup standings, but expects his No. 11 Toyota to qualify for the playoff series beginning Sept. 16. “We’ve never been this far back,” he said. “But we’re gonna make the playoff based on points. Every track we go to, we’re confident we can win. We’re just in a mini-slump right now.”

Stenhouse is also struggling. The 2013 Rookie of the Year won a pair of races last season, but has drawn blanks this year. His No. 17 Ford has finished out of the top 10 the past eight races.

“Yeah, but we’re one spot out of the playoffs right now,” he said. “It probably means we’re going to have to win a race sometime soon. I think Bristol (Aug. 18) is our best shot. I was fourth there last year and think we can improve a few spots. It’s my favorite track.”

Michael, who claims to be the only magician who goes by his real name, returned as a fourth-year player. He was quick to credit the Catawba staff for being an accommodating host. “It’s been great here,” he said with a smile. “All these celebrities, all invited by Austin. You know, we’re all here to win, but we’re here for the children. At the end of the day, we’re all winners.”

Johnson, who recorded 67.5 career sacks for the Panthers and played in Super Bowl 50, was happy to contribute. “Anything to help out,” he said. “Myself, I’ve been blessed. Ty and Austin do a lot of good things for the community. I’m here because it’s a good cause.”

“The Super Bowl was a great experience,” he said. “But the wrong outcome.”

At 6-foot-11, Miller was hard to miss. Neither was Mani Love of the Harlem Globetrotters — a 4-foot-5 backcourt wizard with a 75-inch vertical leap.

“I like charity events,” said Miller, a two-time NBA all-star. “I’m part of the Big Brothers/Big Sisters program back in Indiana. This one is about helping kids. How could I not be here?”

Miller was signed by the Hornets as an undrafted free agent out of Purdue in 1998. He also played for Chicago, Sacramento, Indiana, Houston and Minnesota. He averaged 11 points and seven rebounds per game over his career and once traded punches with Shaquille O’Neal.

“This is the only basketball I play nowadays,” Miller said. “My one-day-a-year. I’m part of the reason they hold this event in the summer. Originally, it was November, but I told them they can’t have it during deer season.”

Finally, there was Love, who flew in from L.A. on Tuesday night. “When Austin asked me to help out, I said, ‘I’m all about the kids,'” he explained. “Whatever I was doing, this was more important. I’m a little guy. Austin’s a little guy. We know what it’s like.”

Love is a New York City resident who has spent the past two years touring the world with the Globetrotters. “It’s still a job,” he said. “I was playing somewhere and I was known as an internet sensation. Next thing I knew, I was a Harlem Globetrotter.”

Before jumping back onto the court, Love delivered an appropriate parting shot.

“Unfortunately, accidents do happen and kids get hurt,” he said. “You can’t take every day for granted. You have to cherish it for what it is, cherish this city and this moment. We’re all here for a cause. And just by being here, you’ve already won.”

Those wishing to contribute can join an online auction until 3 p.m. Friday. Bid on NASCAR and sports memorabilia by going to fanaticauctions.com and searching Dillon Bros. 3 on 3.