Refresh your menu with new ideas for old favorites 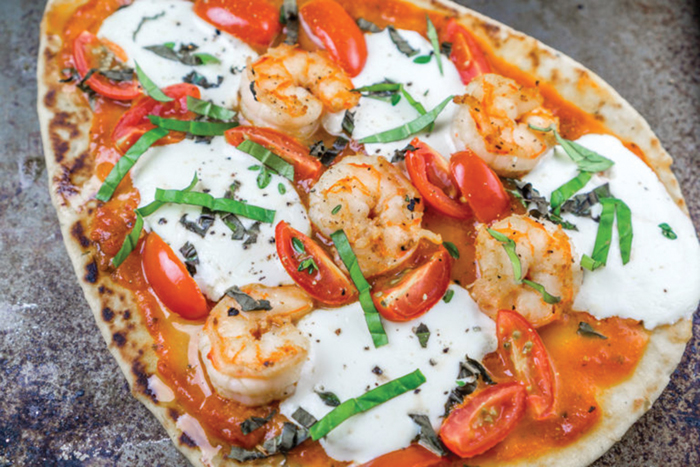 Babaganosh.com A quick shrimp pizza on naan bread will break the dinner routine.

You’ve had corn on the cob.

You’ve had tomato sandwiches, and corn on the cob, with a side of cucumbers in vinegar.

All good summertime meals. But are you looking for something a little different?

Meal planning is hard this time of year. You might have an abundant garden, but you’ve also been eating the same thing for weeks. It’s too hot for chili. Isn’t there something in between?

Well, yes, there is. It can be hot or cold, depending on the day. Drearyness like this week could be brightened up quite a bit with some fresh food, and these dishes are bright and pretty.

1 cup half and half

Melt butter in a Dutch oven and add the onion and jalapeño. Stir until softened. Add garlic and cook 30 seconds. Add the cumin and coriander, then the broth. Bring to a boil.

Reduce heat to low and add half and half, cheese, corn, chilis and tomatoes and cook until the cheese is melted and the soup is heated through.

Serve with a squeeze of lime juice and a dollop of sour cream. Can be served with a side of watermelon and cantaloupe.

Toss shrimp with lemon juice, paprika, salt and pepper. Heat skillet and add aolive oil. Cook shrimp about 2 minutes per side, until just done. Set aside.

Put the naan bread on a large baking sheet. Top each bread with 1/4 cup marinara or pesto, mozzarella slices, grape tomatoes, shrimp and half the basil leaves.

Bake at 400 until the cheese has melted and the breads have crisped slightly.

Bring a large pot of salted water to a boil. Add the pasta and cook until al dente, 7-9 minutes, or according to package instructions. Reserve 1/2 cup cooking water, drain the pasta and set aside.

Heat the oil in a large skillet over medium heat until shimmering. Add the garlic, cook, stirring frequently, until golden. Use a slotted spoon to transfer garlic to a paper-towel-lined plate.

Add the eggplant, zucchini and squash, along with 1/2 tsp. salt and pepper and cook until vegetables begin to soften, about 3 minutes. Stir in tomatoes and cook five minutes. Add the corn, remaining salt and reserved garlic. Cook 1 more minute.

Add the wine (or broth) and simmer until reduced by half, about 2 minutes. Add the reserved pasta water and butter and bring to a boil. Add the pasta, then toss to coat with the sauce.

2 Tbsp. toasted nuts, such as pine nuts or walnuts

Make the pesto: Place the basil, arugula, nuts, cheese, garlic and salt in the bowl of a food processor fitted with the blade attachment, or in a blender. Process until finely chopped, about 1 minute. Scrape down sides of bowl, then, with machine running, stream in the oil and blend until uniform. Set aside.

Make the salad: place the onion in large bowl, add 2 Tbsp. of the pesto and stir to combine. Set aside.

Pat the chicken dry with a paper towel. Season both sides with salt and pepper. Heat the oil in a large skillet over medium-high heat until shimmering. Ad the chicken and cook undisturbed until browned on the bottom, 6-9 minutes. Flip and cook on the second side another 6-9 minutes, until internal temperature reaches 165 degrees. Transfer to a clean board and tent with foil.

Meanwhile, bring a pot of salted water to a boil. Add the green beans and cook until crisp-tender, about 2 minutes. Drain and set aside.Using a vegetable peeler, slice the zucchini from top to bottom into ribbons Add to the bowl with onions and add about one-third of the pesto and toss to coat.

Cut the chicken into 1-inch cubes. Add remaining pesto, chicken, green beans and tomatoes to the bowl of vegetables and toss until everything is coated. Serve at room temperature or chilled.

If you’re feeling lazy, buy an 8-ounce jar of pesto and blend it with the arugula and a touch more oil.