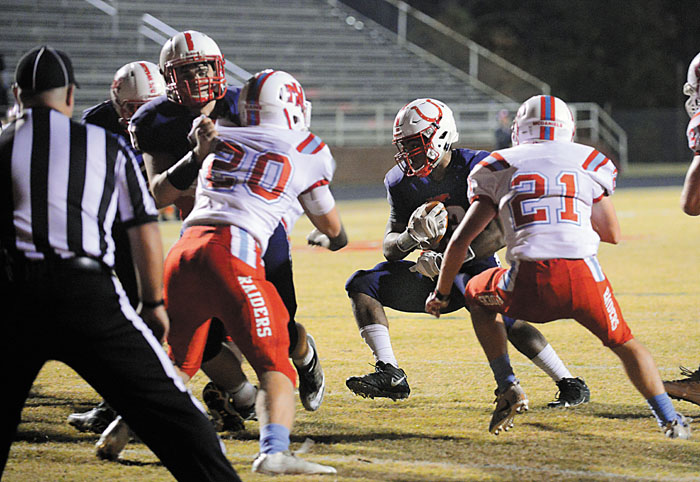 Wayne Hinshaw / for the Salisbury Post East Rowan’s Christian Bennett scores a TD against North Iredell during a game on Nov. 3, 2017.

GRANITE QUARRY — While the rest of the county slept, the East Rowan Mustangs got official football practice started at 8 a.m. on Monday.

West Rowan, South Rowan, North Rowan, Salisbury and Carson staged night practices to get things rolling, so for a half-day, at least, the Mustangs got the jump on the competition.

“I prefer morning practices because of weather,” East head coach John Fitz said. “When it rains around here, it usually seems to be in the afternoon or at night. The mini-camp we had, we never would’ve gotten that work in if we’d tried to do it at night.  So we’re going early, trying to avoid any weather issues.”

Former Catawba assistant coach Fitz has been at East for a while, first as defensive coordinator for Kenneth McLamrock (now at Central Cabarrus), and then as head coach last season.

The most recent glory days for East Rowan football came with the 2014 playoff run fueled by record-breaking offensive players — Samuel Wyrick, Seth Wyrick and Max Wall. Since that late-season stampede in 2014, East hasn’t been a serious factor in the county or conference. The records have been 3-8, 4-8 and 3-8.

East clobbered 2As Central Davidson and South Rowan for two lopsided triumphs early last year, but the Mustangs didn’t taste victory again until they closed the books on a positive note on Senior Night with a 37-28 North Piedmont Conference vanquishing of North Iredell.

It’s possible East will be mired in that same won/lost territory again this season, but there also are reasons to be optimistic. East has exceptional seniors. Linebacker Christian Bennett, back/returner Sam Wall, receiver Gabe Hinceman, center Hunter Eagle and Jax Fitz, the coach’s versatile son, aren’t strangers. They’ve been around, and they were joined last year by explosive, 6-foot-7 defensive end Elton Hooper, a high-impact playmaker.

“We do have good, experienced leaders, some seniors who have been playing since they were freshmen,” Coach Fitz said. “We’ve got some guys who we expect to do some big things for us.”

While Bennett and Wall figure to be two of the county’s most dynamic players — player of the year candidates — East’s overall numbers aren’t where Fitz would like them to be.

“We had exactly 60 today,” he said. “That’s not good, in my estimation, but it’s kind of where we are right now. Talking to people, it sounds like numbers are down for a lot of schools.”

One of those 60 is a confirmed No. 1 quarterback, which is always helpful. Logan Forbis came up from the jayvee ranks to compete in five varsity games in 2017 and tossed three TD passes on that successful night against North Iredell.

The first date when scrimmages are allowed is Wednesday, Aug. 8. East plans to hold a joint practice with Randleman then, although the site hasn’t been determined yet.

On Friday, Aug. 10, East will scrimmage North Rowan at 8 p.m. as part of the Rowan Jamboree hosted by West Rowan. The cost of that event is $6. Fans will have a chance to take a look at all six Rowan programs on one night and in one place.

East opens the season at home against North Stanly on Aug. 17 and starts NPC play on Oct. 5 at West Rowan.

While there are mandatory dead periods, high school football is close to a year-round undertaking now. Like everyone else, East conducts spring practice (approved by the NCHSAA, starting in 2015) and numerous summer workouts, so that first day of official practice isn’t the humongous, earth-shaking event that it once was.

“We saw maybe four or five new faces today,” Fitz said. “But basically, it’s those same guys who have been there all along, the guys who were there in the spring and  for the summer workouts. And that’s OK. It means we don’t have to do a lot of re-teaching. We just picked up where we left off.”

Still, yesterday was a pretty significant day for East’s players as well as a stable coaching staff. After all, a new sports year officially has begun. No one is 3-8 now. Everyone is 0-0 and setting lofty goals.

“That first official day is still a renewal, a fresh start for everybody,” Fitz said. “For me, personally, it’s something I always look forward to, and it’s still very exciting. When I don’t feel that excitement, that’s when I shouldn’t be doing this anymore.”