A treasure to be polished: Ambitious plan laid out for Wil-Cox Bridge recreation area at Yadkin River 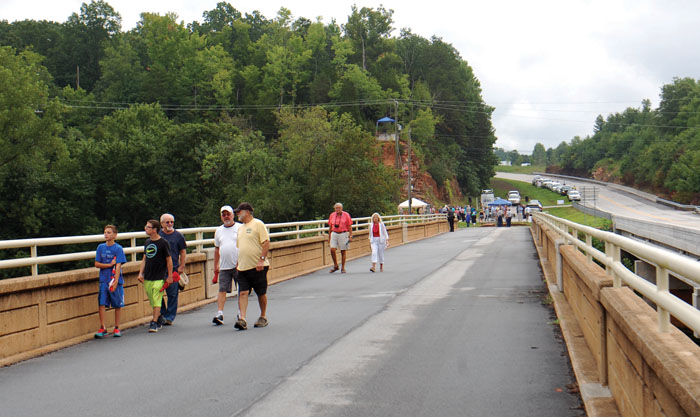 Prior to Monday's groundbreaking ceremony, visitors walk on the Wil-Cox Bridge. This photo looks toward Davidson County with U.S. 29 on the right. Mark Wineka/Salisbury Post

DAVIDSON COUNTY — Dr. Max Walser took an arrowhead out of his pocket that was found in this area along the Yadkin River.

Someone has dated it to be at least 6,000 years old, Walser said, and he acknowledged being tempted to turn around, walk to the railing of the Wil-Cox Bridge and throw it in the river as some sort of gesture or celebration Monday morning.

A groundbreaking was held Monday for a new Wil-Cox Bridge at the Yadkin recreation area. A good-size crowd of both Davidson and Rowan countians gathered on the Davidson side of the 1920s Wil-Cox Bridge and heard of a steering committee’s ambitious plans for the site.

Imagine an area filled with pedestrians, hikers, bikers and kayakers.

Picture visitors climbing to the top of York Hill or taking terraced steps down to a walk along the Yadkin River.

Jeff Ashbaugh, senior project manager for Alfred Benesch & Co. of Charlotte, did much of the conceptual design, and he compared it to “kind of like opening a treasure chest and finding some old tarnished coins.”

But the jewels and coins from that treasure chest are about to be polished, Ashbaugh promised. He said he personally has driven across the Yadkin River in this area for 25 years and had no idea, until he became involved with the Wil-Cox Bridge, about the historic landscape of which it is a part.

There are hundreds of thousands of people in the region and state who don’t know the history, Ashbaugh said.

Walser, chairman of the Wil-Cox Bridge/Fort York Steering Committee that has guided the project, said that’s about to change.

For photographers’ and posterity’s sake, members of the steering committee lined up at the edge of Wil-Cox Bridge to turn over some soil and mark the start of Phase 1.

Joe Thurmond, vice president of DreamBuilt Construction Inc., said his crews will be on the site within the next two to three weeks, and the first phase of construction could take as long as six months.

“We’re a hands-on builder,” Thurmond said. “I will be here most of the time. … We’re excited to work for Davidson County.”

The master plan for the area calls for landscaping the surface of the bridge itself and including features such as lighting and benches. This “Wilcox Way” will be open to pedestrians and have gateway arbors or arches on both the Rowan and Davidson county sides.

The Davidson County side of the bridge will have an entrance patio. There will be 15 parking spaces near the entrance and a landscaped, pedestrian connection to overflow parking that will have room for 40 cars and two buses.

A couple of pedestrian access points will be in place for the Fort York historic site, the bluff that rises high above the river in Davidson County.

The York Hill boat access will have an improved entrance drive, defined vehicle circulation patterns, picnic facilities and designated parking for the disabled.

A riverwalk will be constructed from the bottom of Wil-Cox Bridge to the boat access area.

On March 9, 2010, the Davidson County commissioners voted 5-2 to take ownership of the bridge from the N.C. Department of Transportation.

On Jan. 9, 2015, the LandTrust for Central North Carolina received a grant from the Clean Water Management Trust Fund to preserve Fort York (York Hill). And the steering committee formed and met for the first time Oct. 14, 2015.

“This is a great day to be in Davidson County,” said County Commissioner Lance Barrett, who is also a member of the steering committee. “This is a project we’ve worked on for a long time.”

Walser, retired superintendent of schools in Davidson County and a former county commissioner, said he is thankful for “this old bridge and what it means to all of us.”

“This is going to be an outstanding tourist attraction for this area and maybe the whole state,” Walser said.

Walser credited the steering committee with being the best, smartest and hardest-working group he has been associated with in 40 years.

Walser recognized  committee members and everyone else who played significant roles leading up to the groundbreaking. He singled out Pat Ivey, Division 9 engineer for the DOT. “I think he wanted us to have this bridge,” Walser said.

And Walser also gave a tip of the hat to former Davidson County Commissioner and now state Rep. Larry Potts, who helped secure $176,000 from the General Assembly for the bridge project.

Through the DOT and General Assembly, the project has about $2.5 million to start with, Walser said. Money that had been designated for bridge maintenance by DOT has gone toward the project.

Besides the area’s history, the educational component will include a rain garden demonstrating how stormwater runoff can be naturally cleaned before the water goes into the river.

According to a history put together by the steering committee, Wil-Cox Bridge, which has a dramatic open spandrel design, opened to fanfare in 1924 as the first free public bridge across the Yadkin River, spelling the end of a toll bridge, fords and ferries.

The DOT marker for the bridge actually dates to 1930, and speakers Monday said a celebratory gathering much like Monday morning’s was held at the bridge in 1929.

Other U.S. 29 and Interstate 85 bridges would come in the 1950s, but the Wil-Cox Bridge remained open to vehicular traffic until recent years.

Walser said Native Americans were in this area at least 12,000 years ago. Spanish soldiers under Juan Pardo briefly tried to colonize the area in 1567-68. In 1670, explorer John Lederer recorded a visit to the Saura Indians at the Trading Ford.

Until bridges were built, Native Americans and settlers traded and crossed the river at the Trading Ford, described along with a Sapona settlement by John Lawson in his book “Journey of a Thousand Miles.”

The notable “Trading Path” came through this area and led to the establishment of Rowan County in 1753 and Salisbury in 1755.

In 1781, during the Revolutionary War, Gen. Nathanael Greene and several thousand Continental Army troops successfully crossed the Yadkin River in this area before a storm swelled the waters and made it impossible for pursuing British Gen. Cornwallis’ forces to follow.

Many historians consider this to be a turning point in the war, Walser said, and the extra time allowed Greene to regroup and have a fateful battle with Cornwallis at Guilford County Courthouse.

Walser noted that President George Washington and his Southern Tour crossed the Yadkin at Long’s Ferry, and that Washington had breakfast on the Davidson County side and watered and rested his horses in the Reeds community (where Walser was born).

Fort York — on that bluff on the Davidson County side — was the place where Confederate troops scored one of their last Civil War victories in North Carolina on April 12, 1865.  From the hillside, the Confederates successfully defended the railroad bridge crossing the Yadkin.

In the early 1800s, the mail route from Washington to New Orleans crossed the Yadkin at Trading Ford. In 1818, Louis Beard hired Ithiel Town to build the first bridge across the Yadkin. The toll bridge was known as Beard’s Bridge and later Locke’s Bridge.

A Piedmont Toll Bridge came in 1899 and was built on the piers of the original Beard’s Bridge.

“As a child,” Walser said of all the history in this Yadkin area, “I didn’t have a clue.”

Yesterday: The opening of Salisbury’s first Walmart in 1990