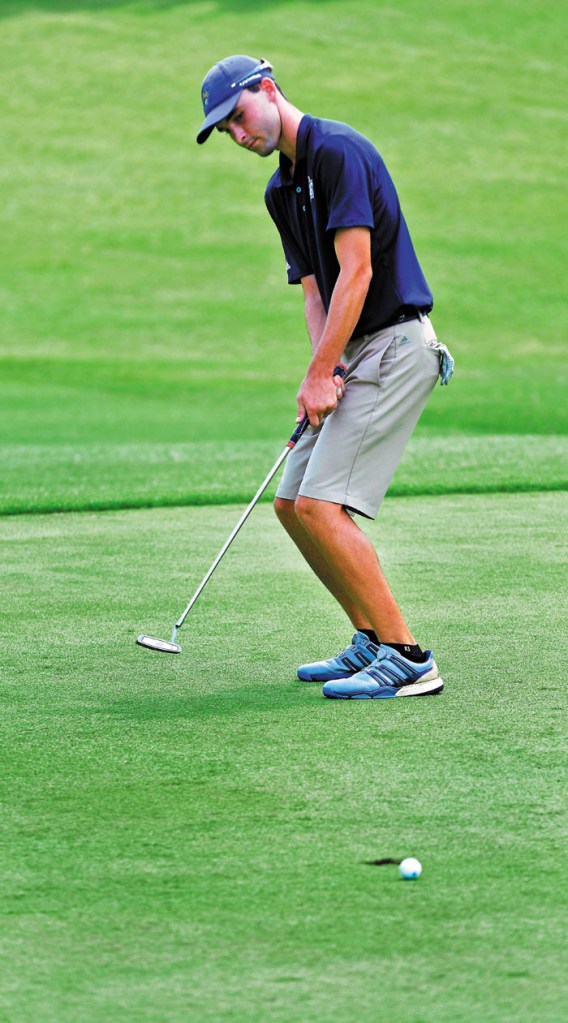 SALISBURY — In the immediate aftermath of Sunday’s championship match of the 40th annual Horace Billings Rowan amateur golf tournament, there was a brief autograph session.

Nick Lyerly had just edged out Kevin Lentz for the title, 2 and 1, and Lentz insisted that the young phenom Lyerly sign the bottom of his runner-up trophy.

“I told Nick I wanted him to sign my trophy so when he hits the big time and wins his first PGA tournament I can tell everyone who beat me today,” Lentz stated.

Lyerly won his second Rowan Amateur title after breezing through the field in the earlier rounds, then holding off a late charge by Lentz in the title contest of the three-day match-play event at Corbin Hills Golf Club.

“He made me earn it today, he really did” said Lyerly of his battle with Lentz.

Lyerly, 19, an East Rowan graduate and a rising sophomore golfer at UNC Greensboro, used a string of birdies to build a 4-up cushion at the turn in the championship match. But as expected, Lentz made a charge with a birdie on 10 followed by a par on 11 to cut the deficit to 2-up. Lyerly responded with a clutch birdie on 12 to go back to 3-up. The players halved the next three holes to make Lyerly dormie after 15.

But Lentz stayed alive with a winning birdie on the par 3 No. 16 hole, and then had a birdie chip shot hit the cup and trickle away on 17 that would have extended the match. But Lyerly calmly closed it out with a par putt to clinch the 2 and 1 win.

“I knew I was going to have my hands full today with Nick,” Lentz said. “He is probably the best player for his age group around here and probably in the Piedmont. I probably could have done better on the front side, but I gave him all I had on the back side with those birdies, But hey, good for him. He deserves this.”

Lentz, 38, was playing in his third championship final but has yet to secure the top prize. He noted that a tense battle in the Sunday morning semifinals against No. 4 seed Ross Brown had an impact. Lentz was 3-up at the turn, but Brown proceeded to birdie 10, 11, 14, 15 and 18 to keep it close in a 1-up loss. “I was able to hold him (Brown) off but it was stressful,” he said. “I was worn out after playing 18 this morning.”

The other Sunday morning semifinal was the exact opposite as Lyerly won early and often to cruise past No. 6 seed Andrew Morgan, 10 and 8. “I made a few birdies and he (Morgan) just got off to a rough start,” Lyerly noted. “I didn’t light it up or anything, but he just never could get anything going.” The quick match allowed Lyerly to relax for about 90 minutes before the 12:30 p.m. championship match. “It was good because I had plenty of rest,” Lyerly said, “But the bad thing was I had to play Kevin who had played all 18 holes and knew what the rest of the course looked like today.”

Ultimately it did not matter, as Lyerly played his normal consistent and error-free game to claim the championship.

“I hit the ball pretty darn good today for the most part,” he said. “There are some really good players in this tournament and it means a lot to win in a very competitive environment.”

Lyerly will continue his very busy golf schedule this summer, playing next week in the CGA Junior Match Play event in Gastonia, before heading out in two weeks to play the prestigious Pebble Beach Golf Links for the U.S. Amateur Championship, Aug. 13-19. Some 300 international golfers will play two rounds of stroke competition to try and advance to the top 64 and match play.

If Lyerly continues his high level of play, as he has this past school year and summer, the autograph on Kevin Lentz’s runner-up trophy will certainly increase in value.