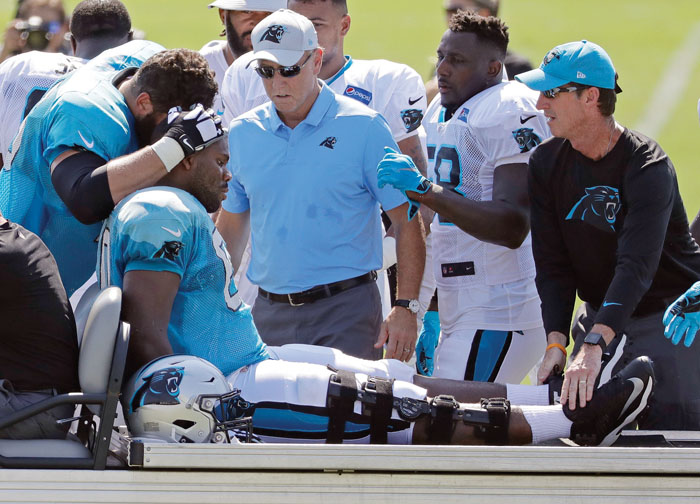 The team said there is no timetable for his return.

Williams was engaged with two pass rushers during 11-on-11 team drills when his knee bent back awkwardly. Several players gathered around Williams and others took a knee while the crowd went silent. He was carted off the field.

Rivera said it was difficult for players to resume practice after watching what happened because Williams is so liked.

“We were kind of floating right there, especially on the offensive side,” he said. “You could feel it and it takes a little wind out of your sails a little bit. But after that period we refocused.”

Williams, entering his contract season, has started 28 games and played in 39 during his three seasons in Carolina. He started all 16 games at right tackle last season. Pro Football Focus ranked Williams as top right tackle in the NFL last season and the third-best offensive tackle overall.

Taylor Moton, the backup right tackle, said Williams is one of his best friends on the team. He immediately took a knee to pray.

“He’s been a great mentor to me, just watching how he plays day in and day out,” Moton said. “He was a (second-team) All-Pro tackle last year and he means a lot to the team.”

Rivera called the injury “a tough one,” saying Williams is a “big part” of the offense.

“We will keep our fingers crossed,” Rivera said. “In the meantime, Taylor is going to have to step up and take advantage of the opportunity to get better.”

Said Moton: “Wherever coach puts me I am going to give it my 100 percent best effort. If it’s at right tackle, so be it. I feel comfortable and confident.”

Dodgers continue mastery of the Braves; Martinez hits No.…