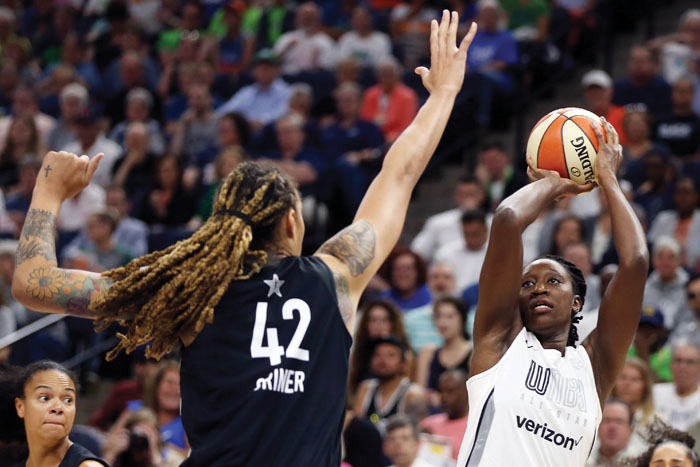 By PATRICK DONNELLY, Associated Press
MINNEAPOLIS (AP) — Lynx star Maya Moore said she’s routinely asked if she has room for all of the awards she’s won in her basketball career. She’ll have to make space for another trophy after her performance on Saturday.
Moore won her third straight All-Star MVP award to lead Team Parker past Team Delle Donne 119-112 in the WNBA All-Star Game.
“Thank you for your concern for my storage space,” Moore deadpanned after she was asked the question again after she scored 18 points, grabbed eight rebounds, and dished out six assists to win the MVP award on her home court.
“It’s crazy, it really is, to just be fortunate enough to continue to be in positions to win, to be playing well, to be healthy,” said Moore, who joined Lisa Leslie as the only three-time MVP of the game and became the all-time scoring leader in All-Star history, passing Tamika Catchings’ mark of 108 points.
Allie Quigley of the Chicago Sky also scored 18 points and Skylar Diggins-Smith of the Dallas Wings added 17 points, eight rebounds, and eight assists for Team Parker.
Team Delle Donne’s Kristi Toliver of the Washington Mystics led all scorers with 23 points, including 7-for-11 shooting on 3-pointers. Rookie A’ja Wilson of the Los Vegas Aces added 18 points.
Toliver made five 3s in the final 5 minutes of the game as Team Delle Donne came back from a 14-point deficit. But Moore drilled a 3-pointer of her own with 1:26 to play, pushing Team Parker’s lead to six and all but sewing up the MVP award.
NEW FORMAT
Eschewing the traditional East-vs.-West format for the first time, the league let captains Elena Delle Donne of the Mystics and Candace Parker of the Los Angeles Sparks chose up sides from a pool of the top players in All-Star voting. That allowed for the rosters to be heavily dominated (16 of the 22 players) by the Western Conference, home of six of the top seven teams in the league standings.
“You’re not going to make a bad pick,” Parker said of the process. “Everybody who’s out here is here is here for a reason, so it was just about having fun and playing with players you haven’t ever played with.”
DEFENDING THE CROWN
Quigley beat a field of six participants to win her second straight WNBA Three-Point Contest at halftime. After she and McBride tied with 18 in the head-to-head finals, Quigley caught fire in redo, scoring 29 of a possible 34 points and sending the crowd — and the sidelines — into a frenzy.
“How did we follow the 3-point contest?” asked Parker, who called it her personal highlight of the day. “We had some of the best shooters in the world competing. To have to make 21 to even get into the top two, to then have a shoot off, to then have Allie hit 29? … That was awesome.”
THROWING IT DOWN
Wings star Liz Cambage capped off the contest with a dunk, becoming the sixth different player to do it in the game.
“I was going to pull up and take a 3, but Candace said I should dunk it so I did,” said Cambage, a 6-foot-8 post who set a WNBA single-game scoring record earlier this year with 53 points.
With talk of adding a skills contest to next year’s festivities, Quigley playfully suggested Cambage push for a dunk contest, a suggestion that the gregarious Australian shut down instantly.
“Girl, I’m getting old now. I’m not in my early 20s (anymore),” said Cambage, who turns 27 next month.
LOCAL LEGENDS
Four players from the hometown Minnesota Lynx were selected for the game, two on each roster, creating a festive atmosphere with the crowd cheering loudly for both sides throughout the game. Moore and Brunson (four points, five rebounds) played for the winning side, while Seimone Augustus (14 points) and Sylvia Fowles (two points, six rebounds) played for Team Delle Donne.
PASSING THE TORCH
The second quarter began with the league’s career leaders in scoring (Diana Taurasi), rebounding (Rebekkah Brunson) and assists (Sue Bird) on the floor. But youth was served with Wilson scoring eight straight points for Team Della Donne. Wilson, the No. 1 overall pick out of South Carolina, was the only rookie selected for the game and scored 12 points in the second quarter to lead all scorers at halftime.
“It was kind of bittersweet to see them win,” Fowles said. “But for us to have four all-stars on this team, on our home floor, in front of these amazing fans, it meant everything.”
VIVA LAS VEGAS
WNBA President Lisa Borders announced that the 2019 All-Star Game will be held in Las Vegas, home of the Aces, who relocated from San Antonio after last season. The Aces, who were represented by Wilson and guard Kayla McBride, reached the All-Star break only 1 1/2 games out of the final playoff spot.