Elizabeth Cook: Signs of past times in downtown Salisbury 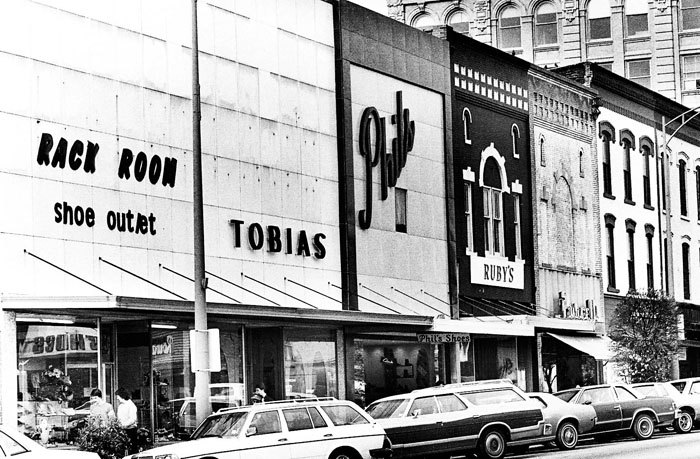 In looking for information in Post files, we sometimes stumble across interesting bits of history.

I offer here photographic evidence to back up my sometimes dubious memory.

After dashing off a column last week about the downtown Salisbury of 40 years ago, I began to second-guess myself. Was there really a Tobias store downtown, or was it in a shopping center?

Well, Tobias may have had a store in a shopping center later, but a look through old photos shows there was indeed a Tobias on South Main Street in the early 1980s.

In addition to confirmation, the photo also gave me renewed appreciation for the appearance of downtown Salisbury today. I had repressed how it looked in 1984, when the photo was taken.

Many decades ago, merchants across the country decided they needed a more modern look. Perhaps it was part of the whole mid-century look that’s being revived in home decor these days. In downtown Salisbury, that modernistic trend resulted in sleek facades of aluminum or other material being placed over storefronts’ original brickwork.

The most distinctive may have been Phil’s, with its name writ large in cursive script, ascending at an angle.

The transformation of these storefronts to what they are today, with the aluminum removed and brick facades restored, didn’t happen overnight. It took the coaxing of the then-new Downtown Salisbury Inc. and city officials — and cash grants — to convince some owners that what was old could be new again.

I need to make a clarification about the clothing store I called Richard Dobkins in last week’s column. The store’s name was also Purcells. That store —where the Salisbury Wine Shop is now, I think — had a lighted sign proclaiming “Purcells Richard Dobkin.”

In 2015, Mark Wineka wrote a feature about a 100-year-old woman who many years earlier had done alterations, window displays and other work at Purcells, Margaret “Monnie” Reid Russell Sherrill.

“Monnie laughs,” Mark wrote, “remembering the day a man on the street rapped on the window and complained about the nude mannequins. Monnie then made it her personal job to wrap any naked mannequin with an overcoat until a new dress was added.”

I guess you could call that facade work, too.

Mrs. Sherrill died last month at the age of 103, mother of the church at Sandy Ridge AME Zion.

We lose the people who know our history every day. Photographs can fill some gaps, but not all. Share your stories. What seems so obvious and eternal now will be gone some day.