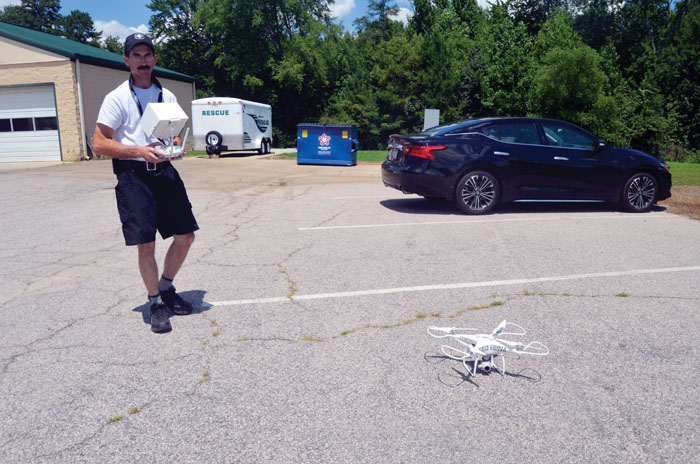 The Rowan County Rescue Squad is a part of a pilot program that began in 2017 using drones to respond to emergencies. Johnny Weddington, is working on becoming certified to pilot the drone. Shavonne Walker/Salisbury Post

SALISBURY — One of the major keys to battling an expansive July 18 fire at Holmes Iron & Metal rested in the hands of an unmanned aircraft — a piece of equipment that weighed less than five pounds.

The aircraft, a drone, which was operated that day by pilot-in-training John Weddington, was able to capture video of the fire that engulfed cars and other material at the East Spencer salvage yard.

Drones are growing in fascination by hobbyists for recreational purposes, but are increasingly becoming part of regular use for emergency services. In Rowan County, two agencies — the Rowan County Rescue Squad and the N.C. Highway Patrol — rely on drones to take their response to various incidents to new heights.

Those agencies are able to operate drones only after personnel pass an aeronautical knowledge test through the Federal Aviation Administration. The operators must receive a remote pilot airman certificate with a small Unmanned Aircraft System rating or be under the direct supervision of a person who does hold a remote pilot certificate.

Each N.C. Highway Patrol troop has a single drone used to map traffic collisions and the Rescue Squad is part of a pilot program using its drone at fires as well as search and rescue missions.

More than 20,000 drones in North Carolina are registered with the Federal Aviation Administration — including hundreds of drones used by businesses, as well as local and state government agencies, according to the N.C. Department of Transportation’s Aviation Division.

Although the Federal Aviation Administration has exclusive authority over the use of airspace in the United States, which includes the airspace used by drones, the NCDOT has the authority to implement and manage regulations pertaining to state laws concerning drone operations within the state.

The squad has one certified pilot, Eric Albright; a pilot-in-training, John Weddington, and two others — Cress and Kevin Dodd who are working on obtaining certification.

Cress said they’ve used the drone a few times and they are working to perfect their skills piloting the drone.

One memorable time the agency used the drone was to help locate a missing teen on a cold January morning. The girl, who officials had said had some mental challenges, walked off into the woods with a dog from the Long Ferry Road area. Officials were able to locate her using the drone and an ATV search.

“We saw real quickly how a drone could assist us,” Cress said.

He said with the drone, missing people searches could be completed much sooner versus a land search alone.

“With a drone, we could do in 20 minutes what people do in an hour,” Cress said.

They’ve also used the drone at a few area fires and even to help local authorities on a foot chase with a suspect. The drone could even be used in HazMat situations for emergency responders who can’t get too close to a spill before determining the type of substance.

The Rescue Squad is looking at other states and departments to see what they are doing with their drone program. Cress has followed a department near Kitty Hawk that uses a drone for emergency response.

The drone cost about $1,300, which includes the drone, a battery and remote controller. The agency has since purchased another two batteries at the cost of $150 to $160 as well as propeller guards for $15 and an iPad mini to use as a monitor for $300 to $400.

The drone has unique features including if the remote loses power, the drone will return “home” at whatever destination has been indicated.

Regardless of where the drone is, Weddington explained, if it is low on battery power it knows how much time it has before the battery is completely drained in order to return back to the home base.

“It will land itself,” he said.

The department would like to enhance their capabilities by obtaining a drone with thermal imaging capabilities.

“That would be the ultimate next level,” Cress said.

Cress said his department hopes to be able to help write policies about safety and its use in emergency response.

“The drones are used as part of the collision reconstruction unit to map fatalities,” said First Sgt. Alex Justice.

Justice, who is with the State Highway Patrol, said the drones can also be used for riot control and used during mobile field force or when troopers respond during civil disorder.

The program was initially funded by the NCDOT traffic management and aviation division. The State Highway Patrol saw the benefits of employing drones and now has 21. The agency has had the drones since March 2017.

Terrestrial imaging was taking upwards of two hours, which requires troopers to block the roads while they reconstruct and map the area of a particular collision. Now the drone technology allows troopers to use photogrammetry.

The drone flies over an overlapping grid pattern and provides 3D scales and mapping of a particular area.

Inclement weather does limit the use of a drone, he said, as well as using the equipment at night. Currently, the drone cannot be used if there is heavy rain or if a collision occurs at night, he said.

“It’s known across the state that we are able to make the highways that much safer by opening them up much quicker. We are able to reduce that time,” Justice said.

He said the highway patrol is looking to supplement the drones with search and rescue, which is currently done by helicopters. There is an additional option to find a missing person using a FLIR infrared or thermal imaging camera attached to the drone.

In May, U.S. Transportation Secretary Elaine L. Chao announced the N.C. Department of Transportation had been selected as one of only 10 participants in the Federal Aviation Administration’s Unmanned Aircraft Systems (UAS, or “drones”) Integration Pilot Program.

Chief Deputy Secretary David Howard said being selected for the program would allow North Carolina the ability to learn more about how drones can safely be used in new ways to help the North Carolina citizens.

The primary focus of NCDOT’s proposal is working with global drone delivery companies to set up a network of medical distribution centers that can use drones to make medical deliveries. Blood and other supplies currently travel by courier to hospitals and testing facilities. However, with drones, medical providers would get the needed supplies and test results much faster.

“Unmanned systems is a new technology that has taken a lot of interest,” said Unmanned Aircraft Systems Engineer Darshan Divakaran.

Divakaran, who works in the NCDOT’s Division of Aviation in Raleigh, says that anything that takes off from the ground is under FAA control.

Users who manage the control are called drivers. The drivers must pass a 60-question multiple choice test.

Licenses are required for commercial and government operations so that both manned and unmanned aircraft can operate safely in the airspace, Divakaran explained.

The need for a permit has been in place in North Carolina since 2014.

“This technology really kicked off in 2014 but it’s always been there for more than 50 years,” Divakaran said.

Although registration is not required for all recreational users, the FAA has guidelines for “responsible operation,” which include not flying above an altitude of 400 feet. However, if a driver is flying above a building then he or she can fly up to 400 feet above that structure.

Drivers must not fly within five miles of an airport or near a prison, public event, stadium or directly over people. Operators cannot fly at night and users cannot fly a drone that weighs more than 55 pounds.