Dodgers continue mastery of the Braves; Martinez hits No. 32 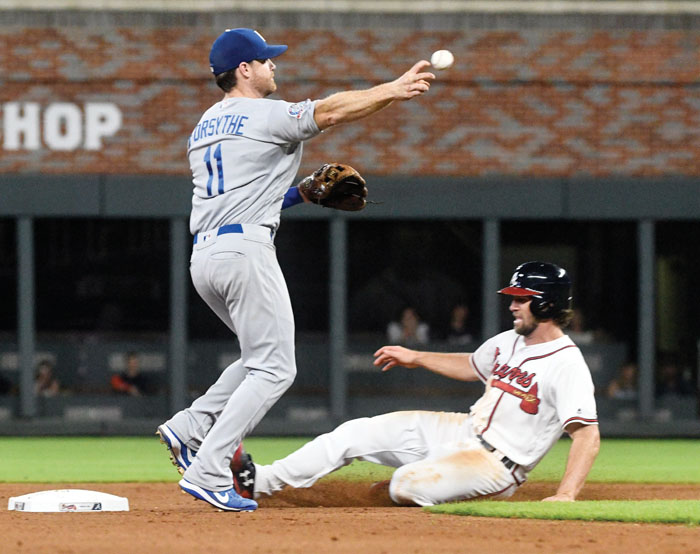 Los Angeles Dodgers second baseman Logan Forsythe throws out Atlanta Braves' Nick Markakis at first base after forcing out Charlie Culberson, right, at second base during the eighth inning of a baseball game Saturday, July 28, 2018, in Atlanta. (AP Photo/John Amis)

Betts raised his MLB-leading average to .346 and Jackie Bradley Jr. hit a two-run triple for the Red Sox. They have a 5 1/2-game lead over the New York Yankees atop the AL East and own the majors’ best record at 73-33.

Logan Morrison hit a solo homer for the Twins, a night after they appeared to throw in the towel a bit in pursuit of a playoff spot following a pair of trades that sent away infielder Eduardo Escobar and reliever Ryan Pressly.

Reinstated after missing 15 games with a right oblique strain, Puig made it 1-0 with a sacrifice fly in the second off Max Fried (1-4) and pushed the lead to 3-0 in the sixth with his 12th homer, a towering shot off Luke Jackson that bounced off the third-level scoreboard facade in left field.

Wood (7-5) allowed one hit and four walks with five strikeouts.

The Braves have lost four straight and 13 of 18.

NEW YORK (AP) — Greg Bird homered to begin a two-run rally in the eighth inning and New York survived a rough outing by newly acquired reliever Zach Britton and a tumble by CC Sabathia, beating Kansas City for a split of their day-night doubleheader.

In the opener, the Royals tagged All-Star ace Luis Severino for six runs in 4 1/3 innings. The doubleheader was caused by a rainout Friday.

Bird opened the eighth with a drive off Brian Flynn (2-2) that made it 4-all. The Yankees went on to load the bases and Aaron Hicks hit a go-ahead sacrifice fly.

Aroldis Chapman worked around a leadoff single and a walk for his 27th save.

In the first game, Severino got hit hard in another shaky start. Trying for his major league-leading 15th win, Severino instead was pulled after Lucas Duda’s two-run homer made it 6-0 in the fifth inning. Rosell Hererra hit an early two-run double, and Salvador Perez had a two-run single that set up Duda.

Severino (14-4) allowed eight hits, walked one and struck out five in his shortest start of the year.

The Yankees lost in their first game since slugger Aaron Judge sustained a fractured right wrist when he was hit by a pitch from Kansas City’s Jakob Junis on Thursday.

Chacin (10-3) was masterful while earning his fourth consecutive win. The right-hander yielded one run, struck out six and walked one. Chacin allowed only two runners and faced one over the minimum until Nick Hundley’s leadoff home run in the sixth. He also gave up a two-out single to Steven Duggar in the sixth and a two-out double to Pablo Sandoval in the seventh.

Votto drove in two runs and four players each knocked in one. The Reds are last in the NL Central but beat the East Division-leading Phillies for the second straight day.

Jay, who played with San Diego in 2016, also brought in a run with a groundout in the second, when the Diamondbacks took a 4-0 lead against Tyson Ross, who has been rumored to be on the trading block.

The Padres got back into the game, with Ross hitting a tying single in the fourth, but their bullpen faltered in the eighth. Daniel Descalso hit a leadoff single off Phil Maton (0-1) and Jeff Mathis sacrificed before pinch-hitter Chris Owings walked. Kirby Yates, San Diego’s new closer after All-Star Brad Hand was traded to Cleveland, was greeted by Jay’s double. Paul Goldschmidt followed with his second RBI single of the game. The Diamondbacks added two runs in the ninth off Phil Hughes.

Archie Bradley (3-2) pitched a perfect seventh for the win. Arizona starting pitcher Patrick Corbin struck out eight in six innings and also had two singles and an RBI.

Eduardo Escobar made his debut with the Diamondbacks a day after being acquired in a trade with Minnesota. He started at third base and batted fifth, going 2 for 4 with a walk and a run scored.

Antonio Senzatela shook off a first-inning run to pitch effectively into the sixth of a game that was delayed 51 minutes at the start because of a storm cell that was moving through the greater Denver area.

Pat Valaika homered and singled to drive in two runs and Tom Murphy added a run-scoring triple for the Rockies. Oakland lost back-to-back games for the first time since dropping four straight in mid-June and had its 11-series (10-0-1) unbeaten string snapped.

Senzatela (4-3) allowed one run on five hits in 5 2/3 innings. He struck out six and walked four. Wade Davis got three outs for his 29th save. Brett Anderson (2-3) was the loser.

Mancini had a career-best four hits and his homer especially delighted the fans, who were given a bobblehead in his likeness. Rickard got three hits and matched a career high with five RBIs.

Caleb Joseph also had three hits. Mancini, Rickard and Joseph, the bottom third of the Orioles’ order, went 10 for 12 with nine RBIs. Coming off a 15-5 romp Friday, the Orioles scored in double-digits in consecutive games for the first time since July 18-19, 2017.

Kevin Gausman (5-8) allowed two runs and nine hits over seven innings. Kevin Kiermaier had a pair of hits, including a home run, for the Rays.

The Pirates have won 13 of their past 15 games, while the Mets have lost two straight after winning their previous three games. DeGrom (5-6) lost for the fourth time since June 28. He allowed three runs on eight hits, his most surrendered this season, with five strikeouts in seven innings.

Votto drove in two runs and four players each knocked in one. The Reds are last in the NL Central but beat the East Division-leading Phillies for the second straight day.

Wandy Peralta (2-2) got the win with 1 1/3 innings of relief. Sal Romano and Jared Hughes each got double-play balls to finish the seventh and eighth. Hughes pitched the ninth for a five-out save, his career-high seventh save. Tommy Hunter (2-1) took the loss.

Blaine Hardy (4-3) gave up a run over five innings. Three relivers combined to pitch four innings of scoreless relief. Shane Greene retired the side in order in the ninth for his 21st save.

CHICAGO (AP) — Pinch-hitter Daniel Palka gave Chicago the lead with a two-run single and Leury Garcia added a three-run triple in a six-run eighth, lifting the White Sox over Toronto.

Garcia finished 2 for 4 with a career-high four RBIs. Yolmer Sanchez and Nicky Delmonico each homered for Chicago, which snapped a three-game losing streak.

Lourdes Gurriel Jr. had two hits to extend his multihit streak to a Toronto-record 10 games. Russell Martin also homered for Toronto, which blew a 5-1 lead.

Juan Minaya (1-2) pitched a scoreless eighth for the win.

MIAMI (AP) — J.T. Realmuto singled with the bases loaded and none out in the 10th inning, and Miami snapped a streak of eight consecutive home losses to Washington.

Miami beat Washington for only the second time in the past 18 meetings.

Magneuris Sierra reached on a bunt single to start the 10th against Kelvin Herrera (1-1). Miguel Rojas tried to sacrifice, collided with catcher Spencer Kieboom leaving the box and was awarded first base for obstruction. A single by Brian Anderson loaded the bases. With the Nationals using a five-infielder, two-outfielder alignment, Realmuto hit a pop fly single down the right-field line.

The Nationals tied the game in the ninth on Daniel Murphy’s one-out RBI single off Kyle Barraclough.