Clyde, Time Was: Boxwoods were to be planted, not removed 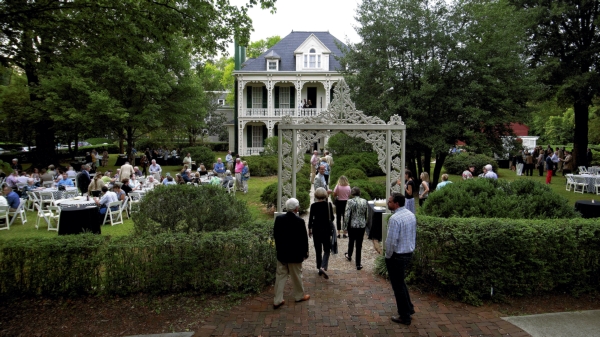 The opening reception for the Preservation North Carolina annual conference started with a meal on the lawn of the Hall House, amid the boxwoods. Jon C. Lakey/Salisbury Post

Time was, we planted boxwoods — not chopped them down. Seems like the first thing preppy, new first-time home owners do, is get rid of the “overgrown vegetation” around the foundation. It hides the house, they say. Truth is “mature plantings” anchor the building to the yard.

Historically, “since the dawn of time, no other shrub has challenged the supreme position the boxwood has held as ‘the aristocrat .of the garden’”

Egyptian tombs in 4000 B.C. included box in their tombs. And in 1000 B.C. in Homer’s Odyssey, Ulysses comes to the magnificent garden of Alcinous, where “ships of myrtle sail in seas of box.” 712 B.C. Biblically, Isaiah 41:19 says: “I will set in the desert the fir tree, the pine and the box tree together.”

Practically, the wood was used for carving and musical instruments. “Smooth grained and proper for the turner’s trade which curious hands may carve and steel with ease invade.” Dryden’s Virgil.

Scientifically, buxus sempervirens (you know it, Latin) are common and can grow to a height of 50 feet. The age of a tree a foot in diameter is estimated to be between 200 and 300 years old. Cleverly, as Grandpa says, as old as dirt, and he should know. That’s a rate of one-and-a-half inches every 20 years.

Historically, ask Rosalie how slow they grow, and thank her for maintaining the garden that may have been here when Cornwallis stomped through town on Feb. 3, 1781.

The Murdoch-Wiley house came later, blissfully, after the Yankees tramped over the heart-shaped box gardens at Dr. Hall’s house on April 14, 1865.

The confused guidelines and code enforcement boys at the city office have never spent a blue-sky afternoon, pleasantly cool in sweet surrender to a rendezvous tryst with life, memorizing time spent amongst the hedges.

Humorously, some people hate boxwoods, insisting they smell like cats. They stink. Dolly Madison said of the pungency of box,“The legions of grass in vain would blot the spicy box that marks the garden row.”

A little spray for leaf miners and nematodes and they take no care. With “no enemy but winter and rough weather,” and needing a little water with this summer’s drought.

Traditionally, in English castles, the holly came down at candlemas and was replaced by boxwood garlands with its fresh green to lend cheer until the spring flowers of Easter. St. Luke’s has some of the oldest boxwoods in town but not without effort and bragging. Amazingly, the Wiseman “box” on the Moses Brown farm may be the oldest survivor of landscapers’ schemes. It’s listed on the National Register.

Aesthetically, the dream of boxwood was an omen of happy marriage and prosperity and sprigs were placed in cemeteries and shrines for immortality. Would that witches would cast spells on those who carelessly cross-cut and dig their ancient roots to be cast aside.

Haywood Cope rooted many a cutting and supplied the trade for years. Show the aged gardener anyone under the age of 20 who knows even the name of any plant, tree, shrub or weed. They do know, literally, about doing what they shouldn’t be doing “in a clump of boxwoods by the shed.”

Knowingly, Thomas Wolfe told you: “You can’t go home again,” Why? The boxwoods are gone.

On the estate of Lord Byron there remain two parterres enclosed with box, divided into what might be separate rooms to symbolize that “in my Father’s house are many mansions.” Old statues, urns and sundials are their furnishings.

Finally, one architect said, “a planting of box establishes immediately a colonial atmosphere of home. Its shaggy green beauty knots up the landscape with the garden and all that is restful and harmonious are endowing.”

So, cherish what you have or inherit, plant more and tell your grandchildren you did. As Oliver Wendell Holmes said, “If we ever live on another ball of stone than this, it must be that there is box growing on it.”