Charen reminds us we were made for more 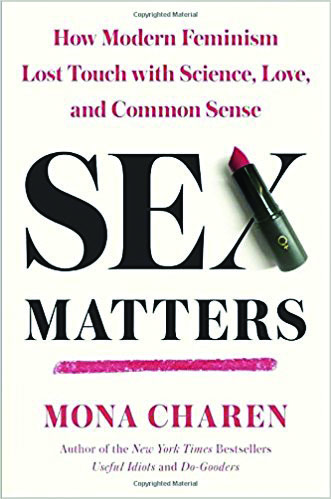 Mona Charen had me hooked at the dedication of her latest book. It’s to her husband, and comes from the Song of Solomon: “I am my beloved’s and my beloved is mine.”

Also known as Song of Songs, or Canticle of Canticles, this book is a window into the love God has for His people. We’re created. There’s some purpose, maybe even a plan. And there is meant to be some joy.

In general, “being at peace with nature,” as Charen recently put it to me, helps.

That is the message of Charen’s new book, “Sex Matters: How Modern Feminism Lost Touch With Science, Love and Common Sense.” Far from red meat about how wrong the feminist left is, Charen writes as a loving Jewish mother who knows happiness and wants others to, as well.

Charen is a nationally syndicated columnist and best-selling author whom I first got to know in the pages of National Review and on CNN’s “Capitol Gang Sunday.” She also chose to lean out of her career and put her family first. Because that matters. Love is love, but it’s duty and responsibility, too, and a source of great joy and sorrow. It’s the stuff of life.

“Our culture has misled young men and women about some of the most important ingredients for human happiness and thriving,” Charen writes. “Getting the basics of life right is not difficult, though it does require discarding some pervasive myths. The most consequential is that men and women are completely alike except for obvious anatomical differences. This is false, and imagining it to be true leads to trouble, as all deceit does.”

She continues: “We’ve convinced an entire generation, at least those with lower levels of education, that marriage is optional for parents. Among high school graduates and those with only some college, marriage is rapidly becoming the exception, rather than the rule. Yet highly educated people, who would never consider having children without marrying first, shrink from recommending to others that the altar should precede the nursery.

“Feminists often speak in terms of power. Everything that is desirable is said to be ‘empowering.’ Women are encouraged to seize power everywhere, from the classroom to the boardroom, and women have been responding. They are outperforming men in school and in many workplaces.”

She writes with a particular sensitivity to broken hearts: “Yet another kind of power that women heedlessly tossed aside 40 years ago was sexual power. The results of that forfeiture are rarely acknowledged. Among the well-educated elites, women must search for love and commitment among a population of young men who have ready access to sex and less incentive than in previous decades to choose monogamy.”

For some, they really never have much of a chance: “Among the less well educated, after several decades of family decline, young men often come from single-parent homes. This makes them less likely to secure educations and good jobs, and that, in turn, makes them less attractive as husbands. Nor do they grow up with role models of responsible fatherhood.”

She says all this while not being judgmental — possibly the only agreed-upon sin of our time.

Man and woman and love and marriage and baby carriage may not be for everyone, but it is a natural and needed script for life and civilization. And perhaps there’s no time like the #MeToo moment to catch people’s attention.

“The sexual revolution and the sex-drenched media of our time have given rise to a sense of entitlement on the part of some men,” Charen writes. “The drunken hookup culture seems to have been designed to the benefit of jerks, selfish creeps, and rapists. It has also confused and misled ordinary young men about what sex is and how women tend to feel, leading to misunderstandings that can turn tragic.”

Both women and men deserve better, Charen insists. She wants a counterrevolution of love and tenderness. Transparency about what works frees the human soul for the self-giving we are made for. That helps everyone. It is worth promoting, trying and supporting. Even celebrating.

“Sex Matters” is refreshment in the heat of anger and misery and desperation about individual prospects and politics. It’s a love letter, and a critical one, that gets to the heart of a word knotted up in all those same things: identity.

You were made for more than you’re often told, and happiness is possible. You may even find, like the aforementioned Song proclaims, that “deep waters cannot quench love, nor rivers sweep it away.”