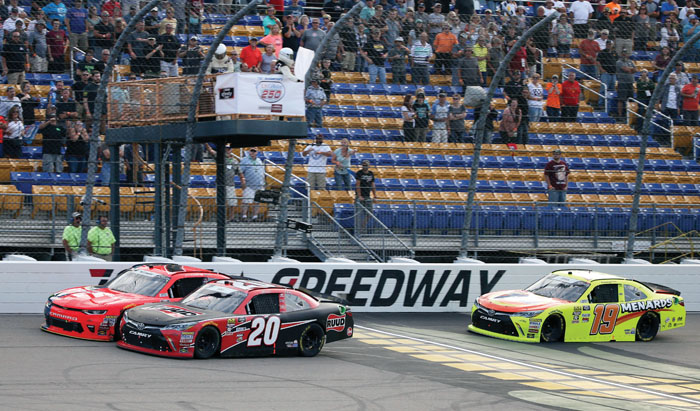 Justin Allgaier and Christopher Bell run side by side on a white flag restart with Brandon Jones right behind during the NASCAR Xfinity Series auto race, Saturday, July 28, 2018, at Iowa Speedway in Newton, Iowa. Bell won the race and Allgaier finished second. (AP Photo/Justin Hayworth)

AMES, Iowa (AP) — Christopher Bell made history Saturday at Iowa Speedway — even though nearly everything that could go against him did down the stretch.

Bell moved back out front in overtime to win a wild NASCAR Xfinity series race on Newton’s bull ring, becoming the first series regular with three straight victories since Dale Earnhardt Jr. in 1999.

Coming off victories in Kentucky and New Hampshire, Bell led 94 of 257 laps. He broke a tie with Cup driver Kyle Larson for the series season victory lead with four.

Bell fell back to fourth in the first attempt at overtime before a red flag halted the race. He retook control in Joe Gibbs Racing’s No. 20 car, going low to beat Justin Allgaier —the winner of the June race at Iowa.

Allgaier was second, followed by Kyle Benjamin and Ross Chastain.

Bell seized the top spot early in the final stage and, after a clean final pit stop, seemed set to cruise to a victory if the race stayed green.

It didn’t, and Bell nearly got knocked out of the race in the first of three late incidents that set up a thrilling finish.

Bell avoided a near-disastrous crash with 14 laps left when Chase Briscoe spun out right in front of him. Bell somehow kept the No. 20 largely clean, and he held first on a restart with nine laps left before Garrett Smithley spun out to draw another flag that brought on overtime.

Allgaier got the best of the field on that restart though, emerging from the pack on the high groove to grab the lead. That wouldn’t last, as Max Tullman and Matt Tifft drew the red flag with a big crash before the first overtime lap could be completed.

When the race resumed, Bell and Allgaier rubbed cars before Bell jumped ahead.

“(Bell) drove into me and tried to put me into the wall,” Allgaier said. “It’s disappointing to be in that position, especially when you think you know how somebody is going to race you … unfortunately that’s Iowa. And (Bell) definitely had the best car. No questions asked.”

Elliott Sadler started on the pole for the first time since Indianapolis in 2017. Cole Custer beat Sadler on the first restart of the race, which came after an early caution, and picked up his first stage win and playoff point.

Custer continued his strong run in the second stage. But Bell, who had moved to within less than a car length of Custer, slipped down to the inside line and finally passed Custer with five laps to go. It was the fourth stage win of the season for Bell, who now leads the point standings by 16 over Sadler.

It was the seventh victory at Iowa for Joe Gibbs Racing and the first for Bell.

“I was just praying for no yellow (flags) there on that long green flag run. When it came, it just became time to execute on restarts. I let one get away on me, but this thing was so good I was able to come from the second row,” Bell said.

LONG POND, Pa. (AP) — Kyle Busch stood on the window ledge of his truck, raised his arms in triumph and then slapped an appropriate number on the roof for a record-tying celebration.

Driving the No. 51 Toyota, Busch won his 51st career race in Trucks — matching the series record.

Busch held off Erik Jones down the stretch to win the NASCAR Trucks race Saturday at Pocono Raceway and tie the record for most career wins in the series.

“It’s kind of funny the way the numbers work out, isn’t it?” Busch said.

Busch matched NASCAR Hall of Fame driver Ron Hornaday Jr. on the list with 51 wins. Hornaday needed 296 starts to reach his 51st win; Busch won his in just his 145th career start. Hornaday made 360 career starts and failed to win a race in his last three seasons.

Busch also won for the 191st time over the Cup, Xfinity and Truck Series.

“It’s been a true testament just to the people I’ve worked with and the race teams I’ve been able to score wins with over the course of my career,” Busch said. “It certainly comes from a lot of great people and getting the job done.”

LONG POND, Pa. (AP) — Daniel Suarez made NASCAR history when he became the first Mexican driver to win a pole in the elite Cup series.

The milestone comes with a bit of an asterisk: Suarez earned the top spot for Sunday’s race at Pocono Raceway because the times of front-row starters Kevin Harvick and Kyle Busch were tossed out because their cars failed inspection.

Suarez had qualified third but officially starts his bid for his first career Cup win from the pole.

“It feels good because we haven’t been running well lately,” Suarez said. “I feel like this is just the beginning of the weekend. The real business is (Sunday) and we have to keep this rolling.”

He was the “El campeon!” of NASCAR’s developmental series.

But the 2016 Xfinity Series champ failed to produce similar results when he was abruptly bumped to Cup on the heels of the stunning departure of Joe Gibbs Racing fixture Carl Edwards.

The 26-year-old Suarez has yet to win a Cup race in 56 career starts and has only two top-five finishes. He’s 20th in the standings in the No. 18 Toyota and will likely need a win to earn an automatic berth into NASCAR’s playoffs.

“The results of my race team has been pretty bad the last few months,” Suarez said. “When things are going bad, you have to work even harder.”

Suarez began racing karts in Mexico and moved to North Carolina as a teenager to pursue a career at NASCAR’s national level. He had to teach himself English by watching cartoons on American television and moved through NASCAR’s Drive for Diversity program to land a job with JGR.

Mexican President Enrique Pena Nieto tweeted in Spanish to Suarez after the Xfinity title, and called him “a pride for Mexico and Latin America.”

Gibbs signed him to his Xfinity Series program in 2014. He won three poles in 2015, had three wins and became NASCAR’s first Mexican champ a year later.

Suarez’s mother was at Pocono for one of the few times each season she visits her son at the track.

“It was pretty cool to have mom,” he said. “My entire family is in Mexico. It’s cool to have my mom with me and starting on the pole. It’s always more fun to have family on the weekend.”

Busch’s burnout sparked flames on the front stretch and a crew was dispatched to put out the fire.

Busch, the 2015 NASCAR Cup champion, is not scheduled to race in Trucks for his Kyle Busch Motorsports team again this season.

He was pushed hard by Jones down the stretch and they battled side-by-side for the lead. But Busch shook off Jones — the two are teammates in Cup for Joe Gibbs — and pulled away over the final laps and won for the second time in the series this season.

“They had a better truck than us this weekend,” Busch said. “I knew Erik was going to be fast in that truck. I wish we were a tick faster. But being a little bit slower, we put on a better show. Erik was able to run me down and get there.”

Noah Gragson, who won this season at Kansas, was scratched because of a stomach virus. Jones subbed for Gragson and made his first start in the series in two years. He won the Truck Series championship driving for KBM in 2015.

“I normally wouldn’t say this but I felt very confident in my opportunity to go to victory lane today,” Gragson tweeted. “We were fastest yesterday in both race trim and qualifying trim during practice. Super bummed I cannot compete today.”

Busch said he didn’t know much about the illness that sidelined Gragson and cracked he hoped he never got sick on race weekend.

“There’s more opportunity for people to hold you out of the race, which is scary,” Busch said.

Busch led 43 of 60 laps and finished a whopping 17.120 seconds ahead of Sargeant in third.