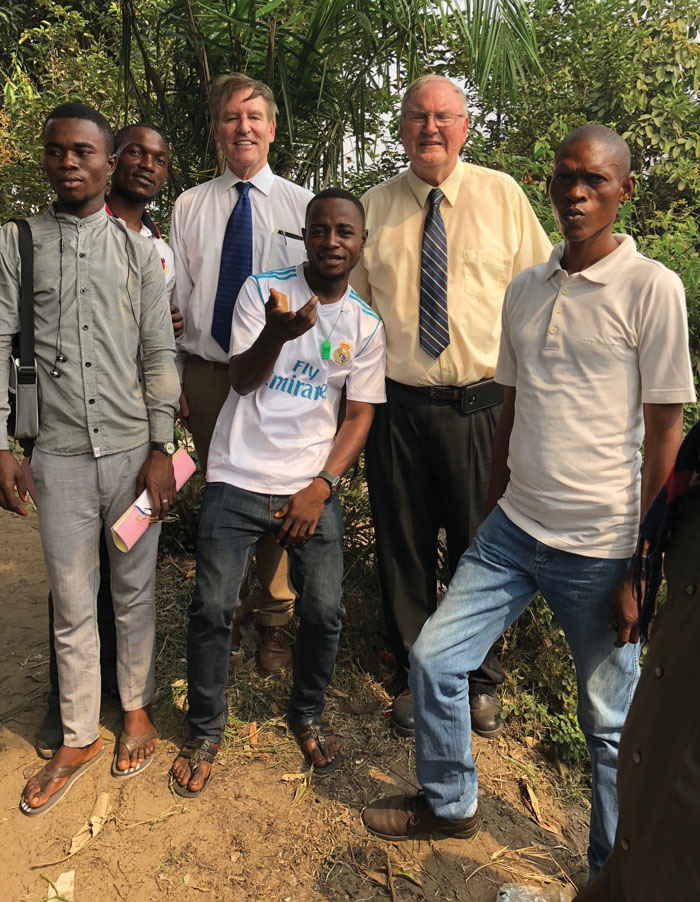 Pastors Jeff Richards and Scott Gerard with some of the pastors taking the course.

Pastors Jeff Richards and Scott Gerard of the nonprofit mission organization, Global Teaching and Preaching (GTP), were invited to the Democratic Republic of the Congo, central Africa, to lead two week-long ministerial institutes designed to provide local pastors, most of whom cannot afford a formal education, the courses they need to be effective in their villages and cities.

On June 30, I flew with Scott from Charlotte to Washington D.C’s Dulles airport to catch a flight to Brussels, Belgium. Flying all night, we landed the next morning and after a layover of three hours, made our next connection to Kinshasa, DRC, where we arrived eight hours later, June 31. The total flying time was 18 hours.

We were met by Nepa Wa Msambelwa and his wife Rezekee at the newly-constructed international airport in the city of 12 million.

After two nights in one hotel we decided to leave for various reasons — one being the huge spider I discovered ominously close by.

Our second hotel was more centrally-located, though situated on one of Kinshasa’s busiest streets. Between the heavy traffic and the nightly parties at the hotel, we were thankful for times of quiet in which we could prepare our daily lessons.

The first Sunday, July 1, I brought a message on prayer to the congregation of Church of the Bible Faith (translation from the French), and well-known singer Jose Nzita and his group provided the lively music. Nzita’s ministry is known not only in the DRC but throughout Africa.

The church has grown since I was first there in 2006; now there are many children and younger couples. Nepa, our host, is the pastor and he has been involved in planting churches all throughout the DRC.

The first week’s institute met at Nepa’s church with a total of 372 pastors. They were taught five subjects from 9 a.m.-4 p.m. daily, with a lunch break.

Between sessions, there was a time of lively singing, prayer and testimonies. Scott and I ate some of their food — sadza (cooked corn meal), fish, greens, and goat meat — which was prepared and served daily by a large group of ladies. 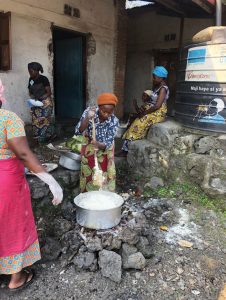 Lunch was prepared and served daily by a large group of ladies.

Usually, however, we just ate granola bars since we were not accustomed to the food.

The students, both young and elderly, were enthusiastic and friendly. The week went quickly and at the end of the course we gave them a certificate signed by Nepa, Scott and myself.

On Saturday, July 7, we prepared for the next week and then went sightseeing in Kinshasa. We had planned on seeing the Congo River, but it was late and we were advised by the local military not to go, because of some possible rebel activity from the neighboring capital city located across the river, Brazzaville, the capital of Republic of the Congo, the smaller of the two countries.

Located across the Congo River from one another, Kinshasa and Brazzaville are the two closest capitals in the world. 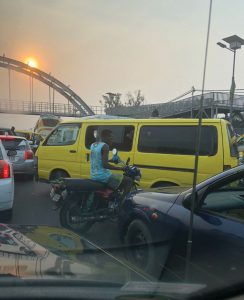 The usual traffic in Kinshasa.

There are no roads in the DRC other than the ones in the larger cities and villages. The only means of travel is either the Congo River or by airplane. About two-thirds of the country is jungle. There are vast resources such as diamond mines, but much remains undeveloped

Within the cities, there seemingly are no traffic rules, and every ride we took was an adventure and an opportunity for much prayer!
Small motorcycles are one of the main means of transportation and are used as taxis. Sometimes there will be four persons on one bike. We saw a lady get hit by a car: she was picked up and placed into a van.

Sometimes the police would stop us and ask for a donation. The children would run after us shouting “muzungoos,” which essentially translates as “white persons.” We had a great time teaching them songs,such as Jesus Loves Me

We travelled to Goma, located on the northern end of Lake Kivu, adjacent to Rwanda, on July 8. Our meetings here were held at the Free Methodist Church of Goma. We taught 436 students and presented 305 certificates. 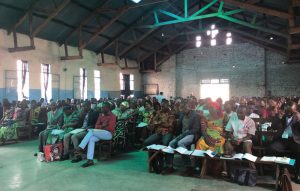 The week-long ministerial institutes are designed to provide local pastors, most of whom cannot afford a formal education, the courses they need to be effective in their villages and cities.

Our total pastors taught for both weeks was 808, with even more people in attendance.
There was also TV coverage and we were told this would be shown on Goma television, a city of about 1.3 million.

We were presented with three wonderful gifts at the conclusion of our time in Goma: a fresh oil painting of Mt. Nyiragongo and Lake Kivu, a replica of the cikudu, (a wood scooter used for many purposes) and a colorful African shirt.

Mt. Nyiragongo, at 11,380 feet, is an active volcano which, in 2003, spewed lava over the majority of Goma and still ominously emits constant smoke. The Gomites exercise constant awareness of the possibility of another “episode.”

On our last Saturday, we visited two orphanages in the city. There are many children who are allowed to stay there and the institutions are administered by local pastors. The majority of the parents of these children have been killed in wars and through contact with AIDS.

We left the DRC on Sunday, July 15, happy that we had gone to teach and preach, but also happy to return to our homes.

Backtracking, we arrived in Charlotte at 7:30 p.m. on Monday, July 16. We experienced more than two weeks in a culture so vastly different from ours that even our pictures cannot begin to convey the experience.

GTP was invited to come again next year to conduct more teaching sessions as well as a crusade in the capital city of Kinshasa, with anticipation of 100,000 in attendance. Jose Nzita, who is as well-known in Africa as someone like Sandy Patty is here, is scheduled to perform in concert.

To learn more about GTP, visit  www.globalteachingandpreaching.com or email jeffrichards7@gmail.com