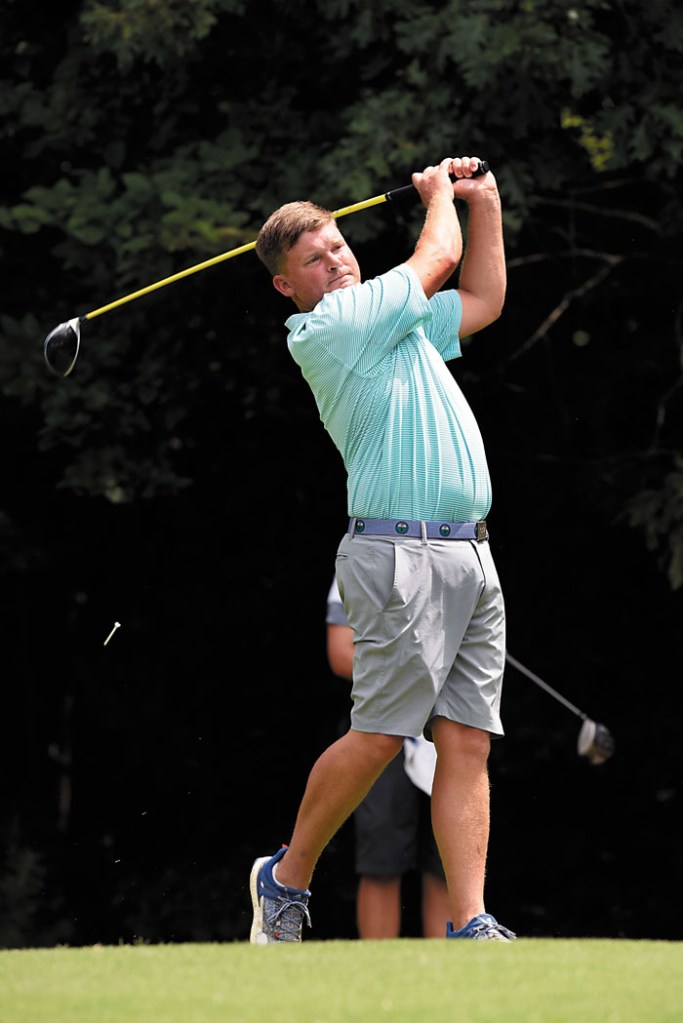 Wayne Hinshaw/for the Salisbury Post ... Kevin Lentz (above) defeated defending champion Keith Dorsett on Saturday at Corbin Hills Golf Club, to advance to the semifinals of the Horace Billings Rowan Amateur. Lentz won in the quarterfinals against Dorsett, 3 and 1.

SALISBURY — One thing is certain: The 40th annual Horace Billings Rowan Amateur golf tournament will have a new champion in 2018.

After 36-plus holes of golf on a hot August day Saturday, the field was trimmed down to four golfers who will battle to a championship Sunday morning and afternoon at Corbin Hills Golf Club.

The semifinals will tee off at 8:06 a.m., with No. 8-seeded Kevin Lentz taking on No. 4 Ross Brown, followed by No. 2 seed and medalist Nick Lyerly going against sixth-seeded Andrew Morgan.

Notably absent from the final day is top seed and defending champion Keith Dorsett, who fell in Saturday afternoon’s quarterfinals to his longtime friend Lentz, 3 and 1. Dorsett has won the Rowan Amateur four times since 2007, including the last two events.

“All I know is, I have to play my most aggressive golf against him,” Lentz stated. “You can’t play it safe with Keith. This is his home course and it is really hard to beat him out here.”

The two golfers were even after 10 holes in the quarterfinals when Dorsett unexpectedly hit a couple of bad drives on holes 11 and 12 to fall two down. Dorsett got one back on No. 14, but Lentz birdied 16 to go two up, then claimed a conceded birdie on No. 17 to close out the match.

Lentz, 38, from Rockwell, had battled Dorsett three times in the past three years and finally found a way to win. Two years ago, he lost to Dorsett on the 18th hole of the championship finals. He then lost again last year in the quarterfinals. He is seeking his first ever Rowan Amateur title.

“I have played in enough of these things that I swear, you almost have to wait your turn,” Lentz said. “And it always takes great golf every time to succeed.”

A couple of large obstacles stand in the way for Lentz as he will have to get past Brown in this morning’s semifinal then turn right around and battle either 2015 champion Lyerly or 2013 champion Morgan.

Morgan had the toughest road to the semifinals on Saturday as he edged No. 11 seed William Little in the morning round, 1-up, in 19 holes. He then rallied from two down in the final four holes against third-seeded Derek Lipe to square the match after 18. It took two extra holes to decide the outcome as Morgan drained a 20-foot birdie on the second extra hole (the par-3 No 2) to edge Lipe, 1-up.

Brown also survived a dramatic battle with fifth-seeded Rusty Morrison by a matter on an inch on the final hole. Brown was 1 up on No. 18 when Morrison rolled a 40- foot eagle putt to within one inch of the cup that would have squared the match. Brown then sank a 5-foot birdie putt to survive and advance.

“Oh my goodness, that was a great match,” Brown said afterwards. “It was close all afternoon and I missed three straight short birdie putts on 15, 16 and 17. That was three straight matches for me that were decided on the 18th hole.”

In truth, the target is now most likely on Lyerly, who led qualifying for the tournament with a 66, then blew past three straight opponents — 6 and 5, 5 and 3 then 4 and 3, Saturday afternoon, over No. 10 seed Jason Bernhardt. The rising sophomore at UNC Greensboro has already won the Eastern Open this summer and heads to Pebble Beach in two weeks to play in the US Amateur tournament.

Lyerly won the Rowan Amateur in 2015 and lost in the finals last year to Dorsett in 19 holes, despite shooting 6-under par. Lyerly, an exceptional collegiate golfer who plays rock-steady, error free golf, says playing 36 more holes Sunday to win another title would suit him fine.

“I have done it before and I just have to go out and do it again,” Lyerly said. “I would love to come back here to my home course and take this title.”

Brewers get 3B Mike Moustakas from Royals