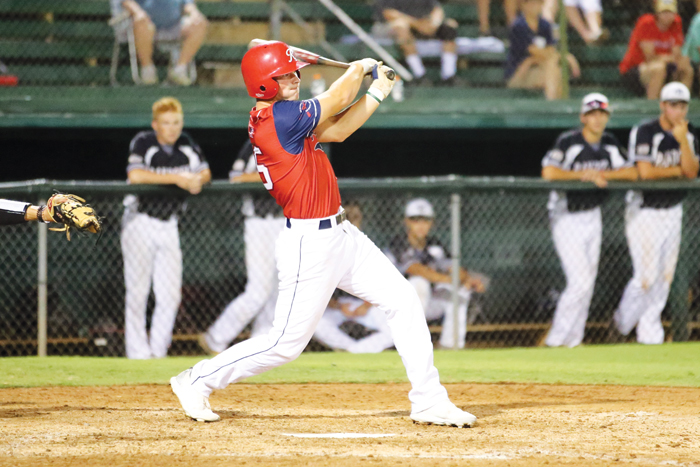 James Sipes file photo/for the Salisbury Post ... Luke Barringer was about the only bright spot for Rowan’s Legion baseball team on Friday at the state tournament in Thomasville. Barringer had two hits but Rowan lost to Pitt County, 9-2.

There was, of course, the second-inning double that Luke Barringer slashed into the left-field corner. And reliever Cameron Graham — the third of six pitchers coach Jim Gantt paraded to the mound — threw 1 2/3 innings of scoreless ball. But other than that, Post 342 may have been better off staying on the bus at Finch Field.

“It’s one game, but tonight was a cluster from the top down,” Gantt said after Rowan dropped a lifeless 9-2 decision to Pitt County and evened its “Stripes” pool-play record at 1-1. “Nothing was really good.”

Because of it, another weed has sprouted in Rowan’s well-manicured season. It faces its fifth elimination game of the post-season this afternoon against Whiteville at UNC-Greensboro.

“We’ve got to forget about this and put it in the past,” catcher Trevor Atwood said. “We need to show up (today) with a better mindset and find a way to win.”

It’s win or go home for Rowan (32-11), which offered little resistance against Pitt County (26-7). Post 39 clinched a berth in Sunday’s semifinal round by limiting Rowan to five hits and turning its pitching corps into a pitching corpse. Rowan hurlers totaled 159 pitches, yielded 11 hits, eight walks and went to 3-and-2 counts on 12 PC batters.

“I couldn’t throw strikes,” left-hander starter Hayden Setzer said, after allowing three runs on five hits in three innings. “It would have helped if my curveball was working better, but it wasn’t. I think everyone was trying to do too much, trying to be a hero.”

If this game had a hero, it was wearing a Pitt County uniform. Setzer ran into trouble right from the start when leadoff batter Drew Nichols reached on an infield hit to open the game. Two hitters later, Robby Wacker drilled a double to the berm in deep left field. That brought up cleanup hitter Ty’Shawn Barrett, a burly first-baseman, who steered a slow, six-hop grounder into right — on an 0-2 pitch, no less — for a two-run single.

“That was unlucky,” Atwood said. “That ball could have been anywhere else and we would have made a play. It changed all the momentum.”

Atwood was later involved in another momentum-swinging moment. Trailing 5-1 in the bottom of the fifth inning, Rowan loaded the bases on hits by Bryson Wagner and Chandler Lippard sandwiched around a walk to Setzer. With a chance to trim the deficit, Atwood offered at a first-pitch fastball from right-hander Jacob Peaden and bounced into a 6-4-3 double play.

“Atwood’s a great player,” said winning coach Ryan Meadows. “We’ve seen him in Legion ball for three years now. He’s the guy they wanted up there, but Jacob made a big pitch.”

Atwood was granted a moment for rebuttal. “I felt like I was real stiff and I jumped at the first pitch,” he said. “I did exactly what they wanted me to do.”

Peaden pitched into the seventh inning, ceding four hits and striking out six. A rising senior at North Pitt High School, he paired a garden-variety fastball with a slow-spinning curve and a change-up that kept Rowan’s sluggers off-stride.

“He did a good job,” Gantt said. “Sometimes you have to give the other team’s pitcher the credit. He did what he needed to do. The guys all said they could see his breaking ball, but they kept swinging at it and missing it by a foot. So I don’t know if we were seeing it or not.”

Pitt catcher Robbie O’Neal said Peaden has struggled to command his off-speed pitches this season. “He’s been mostly a reliever for us,” the switch-hitter said after belting a solo home run in the top of the third. “But the whole summer, he hasn’t had his breaking ball. He had it tonight, basically pitching backwards and throwing a lot of first-pitch curveballs. All that did was make his fastball look harder.”

Pitt cracked the game open in the top of the sixth, when it sent 10 batters to the plate — five of whom worked the count to 3-and-2 — and scored four times to go ahead, 9-1. Following Setzer, Rowan pitchers Jake Perez, Graham, Clayton Gilmore, Carsen Bailey and Scout Nichols formed a conga line to the mound. Rowan’s only runs crossed on John Owen’s sac fly in the second inning and a wild pitch by PC fireman Rayce Harrelson in the seventh.

“Just not our night,” said Setzer. “We’ve got to come back (today), have fun and just play better baseball.”

NOTES: Facing third-and-long, Rowan will start ace right-hander Owen (8-1) in today’s 4 p.m. match against Whiteville. Post 137 is 20-10 and 1-1 in pool play after beating Caldwell, 6-4 in eight innings, on Friday. The winner claims a No. 2 semifinal seed and will play Sunday night at Finch Field. … Peaden threw 96 pitches and left after striking Wagner with a pitched ball leading off the bottom of the seventh. … Setzer threw 46 pitches and none of Rowan’s relievers delivered more than 34.