Panthers’ emphasis was to add speed at wide receiver 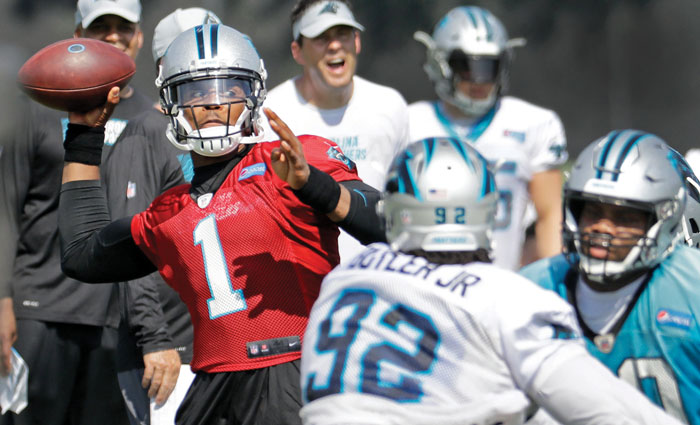 The veteran cornerback has never seen such a compilation of speed amassed at one position on a roster in any of his 10 NFL training camps.

“Oh man, we got some fast receivers,” Munnerlyn said. “I was like, ‘Wow, almost everyone runs a 4.4 or lower. That’s crazy.’ We have some speed on this team — and we probably needed it.”

The Panthers offense stagnated last season as quarterback Cam Newton found himself with no deep threats after Ted Ginn Jr. left to sign with the New Orleans Saints as a free agent and youngsters Curtis Samuel and Damierre Byrd went down with injuries.

The trickledown effect of not having anyone to stretch the field, combined with three-time 1,000 yard receiving tight end Greg Olsen missing most of the season with a foot injury made Newton’s job last season extremely difficult. It also played havoc with the team’s running game as opposing defenses were able to walk an extra defender into the box. Carolina still finished 11-5 and earned a wild card despite finishing 19th in offense but lacked the firepower to make a run in the NFC playoffs.

The Panthers upgraded their speed at wide receiver by trading for Torrey Smith, signing free agent Jarius Wright and selecting the elusive D.J. Moore from Maryland in the first round of the NFL draft.

Smith has averaged 16.4 yards per catch during his seven NFL seasons with the Ravens, 49ers and, most recently, the Super Bowl champion Eagles. Wright joins the Panthers after six seasons with the Vikings, where he worked under new Panthers offensive coordinator Norv Turner and averaged 13.3 yards per catch. Moore caught 80 passes last season at Maryland and earned a reputation as a receiver who makes defenders miss and piles up yards after the catch.

With Samuel and Byrd coming back from injuries, Newton should have no shortage of options when it comes to stretching the field.

“I think we would probably have the fastest track team in the NFL for sure,” Wright said. “We got a 1A and a 1B team. That’s how fast our receiving corps is.”

He said the Panthers “have some speed that we haven’t had in a while” at the wide receiver and defensive back positions.

All of that is good news for Newton, who was limited to 22 touchdown passes and 16 interceptions in 2017 — two years after throwing 35 TD passes and 10 interceptions while earning league MVP honors and leading the Panthers to the Super Bowl.

The logical thinking is if defenses have to honor the deep threat it will allow Olsen and No. 1 receiver Devin Funchess to work underneath the coverage — and also free up rushing lanes for running back Christian McCaffrey and Newton, the team’s leading rusher last season.

Funchess may not be the fastest wide receiver on the roster, but he figures to play a huge role in the passing game.

He moved over to the “X’’ position, or No. 1 receiver spot, during the middle of last season after the Panthers abruptly traded former No. 1 draft pick Kelvin Benjamin to the Buffalo Bills.

Funchess and Benjamin were considered similar possession-type receivers, and Hurney said at the time he wanted to get more speed on the field.

Funchess responded with some solid games in Benjamin’s absence, and finished the season with 63 receptions for 840 yards and eight touchdowns despite routinely seeing double coverage. He’ll have plenty of motivation to improve on that production given that he’ll become an unrestricted free agent after the season.

“I focus on strictly football and that part has nothing to do with me,” Funchess said. “If (the Panthers) want to (get a deal done), they can. … I’m out here to play football, work with coach Turner, work with the rest of the wide receivers, and talk a little trash to (Panthers linebacker) Thomas Davis.”

Wright likes what he sees so far from the wideouts.

“I think we have one of the best groups in the NFL,” Wright said. “We have so many guys that bring a lot of different things to the game. But every guy can run out there. With so many playmakers, an experienced offensive coordinator and an MVP quarterback like Cam Newton our offense should be rolling.”