Olympic champ Biles focused on future, not legacy, in return 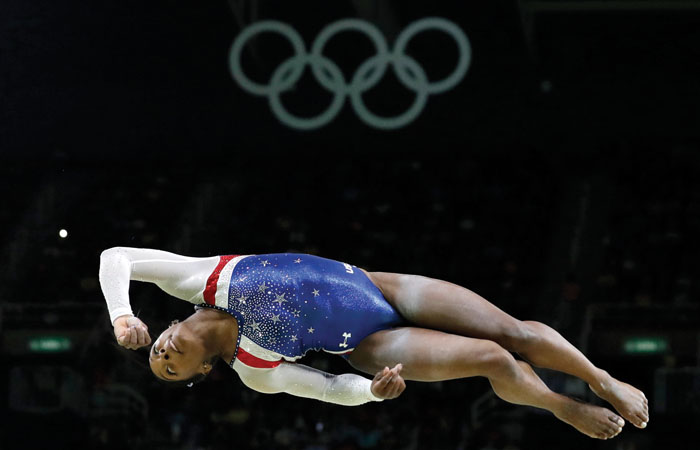 FILE - In this Aug. 11, 2016, file photo, United States' Simone Biles performs on the balance beam during the artistic gymnastics women's individual all-around final at the 2016 Summer Olympics in Rio de Janeiro, Brazil. Biles is ready to take aim at the 2020 Olympics. The gymnastics star and 2016 Olympic champion returns to competition for the first time in two years on Saturday at the US Classic in Columbus, Ohio. (AP Photo/Rebecca Blackwell, File)

COLUMBUS, Ohio (AP) — Simone Biles wasn’t bragging. That’s never really been her thing. Her tone was confident but not cocky. Sincere without the swagger.

Yes, the defending Olympic champion — who returns to competition for the first time since the 2016 Games when she competes in the U.S. Classic on Saturday night — really does believe she’s better now than she was when she stepped off the podium in Rio de Janeiro two years ago with a record-tying fourth gold medal around her neck.

Asked on Friday how her gymnastics in 2018 stack up against the form she showed in Brazil — when Biles cemented her status as one of her sport’s all-time greats with 10 days of breathtaking performances that left her peers grasping for superlatives — Biles didn’t hesitate. She giggled a bit. But she didn’t hesitate.

“I would probably beat her, yeah,” Biles said.

And it only took eight months.

Biles took a lengthy post-Olympic breather to enjoy the perks of her newfound fame. She did “Dancing With The Stars.” She cut commercials. Made the talk show rounds. She moved into her own apartment. She found time for romance.

Then last fall she headed back into the gym her family owns in suburban Houston with no firm plans and no timetable other than to see what she and new coaches Laurent and Cecile Landi could cook up. At 21, she’s taken more ownership of her routines. The weight of expectations she carried during the buildup to Rio de Janeiro is gone. No matter what happens during the rest of her career, she will always have those five Olympic — oh, and 14 world championship — medals.

They aren’t going anywhere. Neither is she. Let her get one thing out of the way: She didn’t have to come back. She wanted to. The difference isn’t semantic. It’s one of the reasons she believes her best gymnastics is still to come.

Even if the organization she is returning to following her hiatus is not.

While Biles returned to the United States to newfound stardom, USA Gymnastics returned to questions about how it handled complaints of sexual misconduct by member coaches raised by an Indianapolis Star investigation. The story mushroomed in the fall of 2016, eventually leading to accusations that former Olympic team trainer Larry Nassar sexually abused gymnasts.

Nassar, a longtime sports doctor at Michigan State who also volunteered as the team physician for USA Gymnastics, is serving decades in prison for child pornography and other crimes after hundreds of women said he sexually abused them under the guise of medical care. Biles revealed she was one of Nassar’s victims in January.

She has declined to get into specifics, preferring to move forward instead of looking back. Yet she also understands how having the Olympic champion on the competition floor can turn the spotlight — at least briefly — back to the sport itself and not the scandal.

“I hope so because gymnastics has been a big part of my life, the coaches’ lives, the gymnasts’ lives, everyone’s lives out here,” she said. “So I hope looking from the outside in they’ll want to put their kids in gymnastics and find the love and joy that we have for it.”

A joy that Biles insists remains. The proof can be found in the way she’s embraced the chance not to reclaim what she once had but instead turned her focus into pushing herself — and gymnastics — further. She’s upped her difficulty on both bars and floor. She’s likely going to ditch the Amanar as her primary vault for the Cheng, which offers the promise of a higher score if done correctly.

“That’s amazing because usually, they’re holding on to what they had and she’s eclipsed that and doing far more,” said Tom Forster, named the new high-performance coordinator for the national team earlier this month. “I’ve never seen that. I’ve never seen that before, so that’s exciting. She’s amazing.”

Biles has an opponent none of the other women in the field have to face: her legacy. She hasn’t lost a meet in five years. Yet as great as she’s felt in practice, even she’s a little curious about how she’ll respond when the lights come on and the scores count.

Maybe it’ll be the same as it ever was. Or maybe the nerves that got to her at the 2013 U.S. Classic, when she was removed from the all-around just before the vault after an iffy warm-up, will return, even if only for a minute.