Kershaw does it all in Dodgers’ win over Atlanta 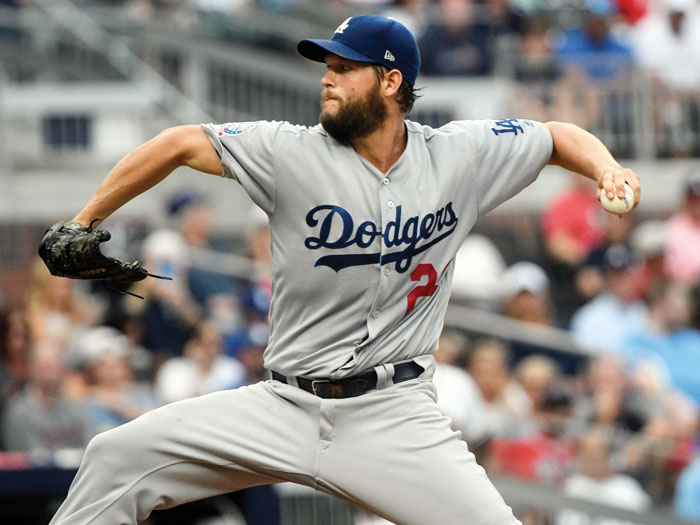 ATLANTA (AP) — Clayton Kershaw had everything working his way, even delivering a big moment with his bat.

Kershaw (4-5) was his usual dominant self on the mound, allowing one run and six hits and striking out eight. The three-time Cy Young Award winner and 2014 NL MVP is 4-0 with a 1.43 ERA in 10 career starts against the Braves.

He surprised the capacity crowd at SunTrust Park by doubling down the left-field line to put Los Angeles up 4-1 in the fourth.

“I was super late and got fortunate,” Kershaw said. “He was throwing 100 mph, or that’s what it felt like. I just happened to stick my bat out there and get lucky on one.”

The inside-out swing that scored Matt Kemp and Chris Taylor didn’t draw too loud of a reaction from the fans, but they had seen enough in the eighth when Kershaw walked for the third time. Atlanta reliever Jesse Biddle was showered with boos.

“Relievers aren’t used to facing pitchers,” said Kershaw, the first Dodgers pitcher since Don Sutton in 1976 to walk three times in a game. “It’s not always easy to throw strikes to a guy that you know has no business being in the batter’s box.”

Los Angeles has won two straight, improving its NL-best road record to 30-22. The Dodgers are 32-16 overall since June 1, tops in the NL over that span.

The Braves have lost three straight and 12 of 17. They were in first place for all but two days from May 2-July 10, but the loss kept them 2½ games behind Philadelphia in the NL East.

Kershaw departed in the eighth, the deepest he’s pitched in a game this season, with two runners on before closer Kenley Jansen got the last four outs to earn his 30th save in 33 chances. Freddie Freeman flew out to end the eighth, and Jansen faced the minimum in the ninth.

“It’s always a nice feeling as a starter to finish a game, but the next best thing is to give it straight to the big man,” Kershaw said. “He did a good job, bailed me out in the eighth with Freddie up and preserved that win.”

Alex Verdugo tied it at 1-all in the third with his second career homer. Foltynewicz, appearing upset with himself for giving up the lead, immediately walked Kershaw on five pitches and seemed agitated the rest of the night.

“I’ve been inconsistent this whole July, so I’ll just have to pick it up in August,” Foltynewicz said. “We’re playing for October so it’s going to be an exciting few months here.”

Yasmani Grandal hit his 17th homer to begin the fourth and has a .389 average with six homers and 14 RBIs in 19 games this month.

LHP Jonny Venters, after three Tommy John procedures and four elbow surgeries overall, was back in a Braves uniform for the first time since 2012, pitching a scoreless sixth. The 33-year-old returned to the majors earlier this year with Tampa Bay, making his first appearance in six years. Atlanta acquired him in a trade Thursday night. Venters said his stuff isn’t as dominant as it used to be, but he was delighted to get a chance to pitch for his old team just 15 miles from his family’s home in Suwanee, Georgia.

BOSTON (AP) — Mookie Betts homered on the second pitch in the bottom of the 10th inning to give the Boston Red Sox a 4-3 victory over the Minnesota Twins on Friday night.

Betts’ first career game-ending homer capped a wild last few innings. The Twins rallied from a 2-1 deficit to take a one-run lead in the top of the ninth. Rafael Devers hit a leadoff homer in the bottom of the inning to force extras. Betts drove Matt Belisle’s first pitch of the night over the Green Monster setting off a celebration to end a hot, muggy night at Fenway Park.

Betts’ teammates cooled him off by dousing him with a cooler full of ice water when the All-Start right fielder stepped out of the dugout for a curtain call.

Belisle (1-1) faced only Betts, who ended it with his 25th homer of the season. Tyler Thornburg (1-0) held the Twins scoreless in the 10th after Craig Kimbrel blew a shot at his 33rd save in the ninth.

Eddie Rosario hit a two-run double with two outs in the ninth to give Minnesota its first lead.

Jackie Bradley Jr. hit a two-run homer in the fifth for Boston and Chris Sale struck out 10 over six scoreless innings.

PITTSBURGH (AP) — David Freese drove in five runs, including an RBI single in the ninth inning that lifted Pittsburgh past New York.

Freese homered in going 3 for 3 with two walks, helping the Pirates win for the 12th time in 14 games.

The Mets had won three in a row. They beat the Pirates 12-6 on Thursday night behind Asdrubal Cabrera’s homer and two doubles — and Cabrera was traded to Philadelphia on Friday.

Texas snapped an eight-game losing streak to the Astros and ended a four-game skid overall.

DeJong’s RBI triple, just the sixth for the Cardinals this season, tied it at 1 in the third, and Jose Martinez followed with an RBI single to give St. Louis the lead.

DeJong added a two-run single in the fourth.

MIAMI (AP) — Max Scherzer allowed one unearned run and struck out 11 in eight innings on his 34th birthday, and Washington beat Miami.

Juan Soto homered, tripled and had three RBIs, Matt Adams had three hits and two RBIs and Bryce Harper drove in two. Washingtoin beat Florida for the 16th time in 17 games, including eight straight in Miami.

Scherzer (14-5) allowed three hits and did not walk a batter while throwing 74 of his 106 pitches for strikes. He lowered his ERA to 2.30 and reached the 200-strikeout mark for the seventh consecutive season, tying Roger Clemens and Walter Johnson for the second-longest streak in major league history.

Gurriel followed Granderson’s blast by hitting the next pitch into the left-field seats. He added another solo shot in the fourth and a double in the eighth and had his ninth straight multihit game.

CINCINNATI (AP) — Mason Williams hit a three-run homer to snap a 2-2 tie in the fourth inning, and Cincinnati’s bullpen made it stand up against Philadelphia.

Suarez led off the second against Nick Piveta (6-9) with his 24th homer. Suarez has homered in five straight games, tying a franchise record.

Yonder Alonso and Brandon Guyer also went deep to help AL Central-leading Indians improve to 29-13 against division opponents. Cleveland scored four runs in the eighth on a tiebreaking single by Alonso and a three-run homer by Guyer.

The rebuilding Orioles are looking to deal Jones before the July 31 non-waiver trade deadline, and he put on quite a show for any potential suitor. Jones hit an RBI single in the first inning, singled and scored in the fourth and homered off Austin Pruitt in an eight-run seventh.

Freeland (9-6) allowed five hits while striking out five, walking three and hitting a batter. Colorado’s starting pitching is 6-0 with a 1.65 ERA at Coors Field in July.

Ian Desmond and Garrett Hampson also drove in runs to help the Rockies win for the 14th time in 19 this month. Adam Ottavino threw a spotless ninth for his fourth save of the year.

Sean Manaea (9-7) allowed three runs on nine hits for the A’s. They had their season high-tying, six-game winning streak snapped.

Olympic champ Biles focused on future, not legacy, in…