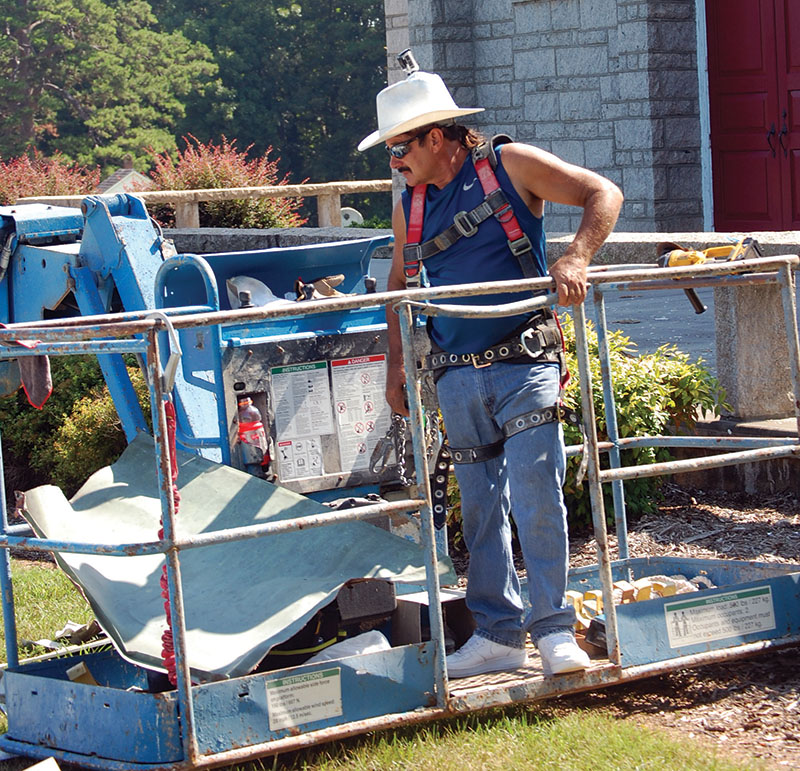 Mark Wineka/Salisbury Post Phillips sets the basket of the crane on the ground in front of Organ Lutheran.

ROCKWELL — Daniel Billings is a character, and he’ll tell you so. He’s cocky, a late bloomer and an author. He’ll tell you all that stuff, too.

Billings literally lives life on the edge, or ledge, depending on the job. Off and on for 40 years, he has been repairing and restoring church steeples — hundreds, by his count.

“I’m one of the most sought-after steeplejacks in the country,” he proclaims. “I dance with the angels, buddy.”

His latest high-rise challenge has brought him to North Carolina and Organ Lutheran Church, where the almost 60-year-old steeple was in dire need of an overhaul.

Billings has taken off the steeple’s metal siding, exposing the wood. He replaces whatever wood is rotten from water damage before refitting the steeple with new siding.

On the spire, where Billings will eventually reach about 150 feet in the air, he is taking off the copper panels, whose patina has become green with age. And at the top of the spire, he will be removing the heavy cast-iron cross — a task that will be one of the most difficult things he does in this job.

Billings has seen the cross moving with a good breeze.

“The cross has been crooked for some time,” confirms Daniel Corl, head of the church’s property committee.

When Billings’ work is finished, the spire will be shining again with new copper and a lighter, straighter aluminum cross will be in place on top of the spire.

Billings talks about his steeples — and Organ Lutheran’s is no exception — as if they were women.

“I’ll make her look beautiful,” he says. “They’re all my angels. I go up and dance with them and try to bring their elegance back.”

His is a world of platforms, footholds, ladders, harnesses and ropes. At Organ Lutheran, he has employed five cans of spray to deal with the wasps.

On his various steeple jobs, Billings hangs from baskets or steers the arms of cranes toward the sections of steeples on which he wants to work.

At times, the only way to reach part of a steeple is to free climb, and Billings says he’s one of the few free climbers left in the United States.

The 61-year-old Billings talks and even looks like a steeplejack who has a bit of hippie surfer mixed in. He sports a long pony tail and of his favorite steeples to work on, he says, “I like the gnarly ones. I like the dangerous ones.”

On the ground, Billings wears his ball cap backward. In the air, he dons a hardhat shaped like a cowboy hat. He is well-tanned, thanks to his closeness to the sun, and prefers muscle shirts and jeans as his work uniform.

He’ll tell you being a steeplejack pays well. And if he doesn’t, the fact he drives a Bentley might confirm it.

Billings considers Galesburg, Illinois, his home. He has shops there and in Florida, where he also likes to do some deep-sea fishing in his off season.

The whole love affair with steeples — and that’s what it is with Billings — started when he was 21 and working in a sheet metal union. A boss asked for a volunteer to do some work on a steeple, and Billings stepped forward.

When he removed a piece of copper on the steeple, Billings spied the written name of the man who had built the structure 100 years earlier.

It had a profound effect on him. He liked the idea that he was preserving the man’s work and that someone else would come along some day and do the same for him.

“I looked around and enjoyed the view,” Billings says. “I realized I had a penthouse view every day.”

Billings has authored three books. “Through the Eyes of a Steeplejack” has been printed, and Corl, the Organ Lutheran congregant, keeps one in his car.

The other yet-to-be self-published books are titled “Saving Midwest Treasures,” recounting Billing’s work in restoring barns, and “Dancing with the Angels,” which he sees as a companion piece to what he hopes will someday be a PBS documentary on his work.

When he’s on a steeple job, Billings often finds a local videographer to record what he’s doing. In Rowan County, he hired Nick Lanz who has been on the Organ Lutheran site with him since last week.

Billings says he has eight years worth of film to be edited and he talks about making a deal with Discovery Channel. He thinks what he does would make a great reality show.

Up in the air, Billings works solo, but on the ground his brother, Steve, helps with gathering up the discarded materials either for the landfill or repurposing. The old copper from Organ Lutheran will be saved and go back to the church to pay for other projects, Billings said.

Corl credits the church council and the property, insurance and finance committees for taking the steps to repair the steeple.

Corl also hopes Billings can do some painting on the steeple of the cherished old stone church nearby and affix a weather vane (saved from many years ago) to its top.

Billings probably will be on the Organ Lutheran job for about six weeks to two months. Through the years, Billings says he also has been a professional bull rider (for 13 years) and used to erect commercial buildings.

When he’s high above the landscape on steeples, Billings says, he doesn’t listen to music because of the need to concentrate.

But listen closely, and you might hear the words of this steeplejack floating through the air.