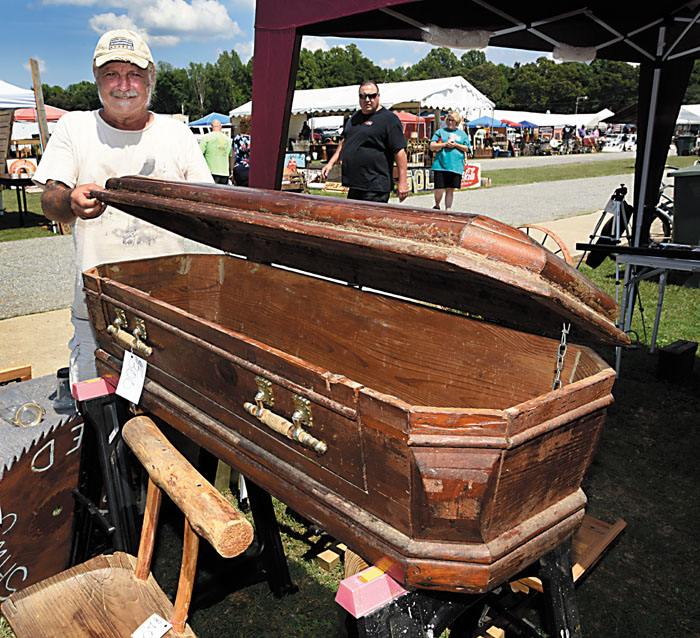 Bruce Amann from Lexington had the only coffin for sale at the Rowan County Fairgrounds at the Carolina Pickers event. It came from the back of a horse-drawn hearse in Arkansas. photo by Wayne Hinshaw, for the Salisbury Post

What’s the price for this table?

What will you take for this jug?

Such is the talk at the second annual Carolina Pickers event at the Rowan County Fairgrounds on Friday. With the talk of a business deal in the air and the sweet notes of the Robertson Boys Bluegrass Band singing in the back ground, the two-day event for selling antiques and collectibles has begun.

You can buy or sell or just walk around and look at all the items on display. Event organizer Shane Benfield said the event is larger than last year with more than 120 vendors and buyers coming from  the surrounding states and as far away as New York. Today, the East Coast Cruisers Car Club from Concord will stop by with antique cars for viewing.

Shane and his father, George Benfield, stopped to pose for a photo next to an old gas pump that Shane discovered in a field in Rowan County. Shane says you will be surprised what you will find out by talking to people.

Chase Kirk, from Kannapolis, drove his 1938 Chevy to the event. With a new engine in the car, Kirk drives the car to work. He found it wrapped in plastic in an old barn. The exterior paint was  damaged but the interior with a clock and radio are just fine. While stored in the barn, someone did shoot a bullet through the windshield and on rainy days, Kirk gets wet with water coming in through the bullet hole.

Walking around the fairgrounds, it is shocking to see a small coffin for sale.

Bruce Amann from Lexington has a child-sized pine coffin displayed for $300. There were jokes about it, “Is it a used coffin?” Amann says the coffin came from Arkansas. A man purchased an antique horse-drawn hearse with the empty coffin loaded in the back of the hearse. The man didn’t want the coffin and Amann did.

A passerby hearing the story said, “I bet Amann stopped, coming from Lexington and dug up a grave on the way over here.” It drew a big laugh.

There is a bit of everything for sale, like the U.S. postal mailbox that John Davis brought from Mt. Airy or the weather vane from the roof of an old barn in New England that Grit Antiques in Davidson has.

There is an old Remington typewriter, a Zenith radio and a sewing machine from Kernersville.  There are other gas pumps, five-gallon oil cans, service station logo signs and even an old barbershop chair with a headrest used with shaving. There are old stained glass church windows.

Sherrie Feamster, from Salisbury, sat in the back of her truck to get protection from the hot sun. With her in the truck were used auto tires for sale, a male mannequin missing its head and a female mannequin wearing a blue evening gown.

Gary Partridge and his wife Mary, from Sanford, came prepared to do serious shopping with a metal yellow wagon to haul their treasures. Their daughter, Jessica Skinner, had already loaded the wagon with an old dairy milk can and a black cast iron cooking pot.

Maybe one of the most interesting vendors was Tim Wray from Newton. He had dozens of mannequin arms and legs under his tent. He had male mannequin head sitting in a metal lawn chair that looked very real. Laughing, he told the story behind the mannequin pairs. He said he bought an “entire pile of mannequin arms, legs and heads thinking he would assemble the mannequins as whole bodies and sell them.” To his surprise, the legs, arms and heads would not fit together so he has a whole pile of misaligned mannequin parts.

Even if you are not interested in antiques, the show of displayed items is worth the $3 admission just to walk around and talk with the vendors and hear their stories and see their goods.

The Saturday hours are 8 a.m. until 6 p.m. at the Rowan County Fairgrounds on Julian Road.

Dancing with the angels: Steeplejack Daniel Billings brings his…