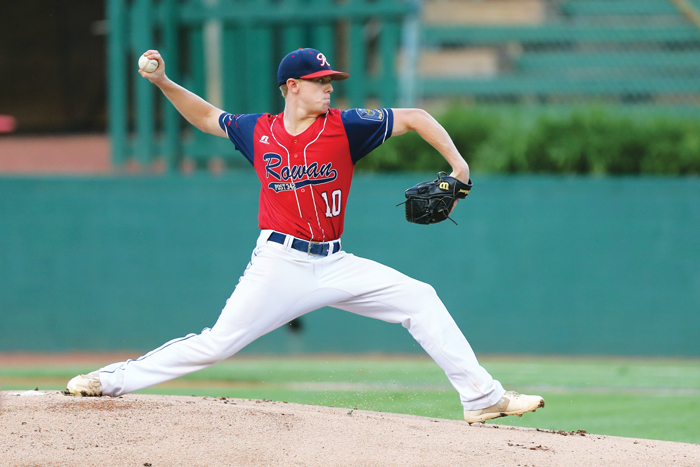 James Sipes/for the Salisbury Post .. John Owen pitches during a recent game at Newman Park. Owen hurled Rowan past Whiteville, 7-3, on Saturday at the American Legion state tournament in Greensboro. Rowan faces Shelby today in the semifinals at 7 p.m., at Finch Field in Thomasville.

GREENSBORO — John Owen isn’t the sort to shy away from a pressure situation on a big stage.

From a distance, the Rowan County right-hander looks like he’d be at home in a Mark Twain novel, a fishing pole propped over his shoulder. Narrow the lens and it’s his unyielding, inner fortitude that makes him both dangerous and successful.

“I don’t think it really matters what the game is or who we’re playing,” coach Jim Gantt said Saturday at UNC-Greensboro, where Owen helped Post 342 extend its season with a 7-3 victory over Whiteville in the American Legion state tournament. “If it’s his turn to pitch, he’s just going to go do what he does. That’s all he’s gonna worry about.”

Owen was a difference-maker as Rowan (33-11) earned a berth in tonight’s semifinal round against Shelby. If he was feeling any heat as the locals scrambled for their post-season life, it hardly showed.

“There’s always pressure in every single game,” he said, moments after his complete-game performance gave Rowan a 5-0 record in elimination games. “I try to keep that pressure from turning into nervousness. I tell myself to go out there and fill up the strike zone. That’s how I pitch.”

He did that in signature style, inducing 12 groundouts and fanning five in a concise, 97-pitch effort. Owen threw first-pitch strikes to 21 of the 30 Whiteville batters he faced and allowed only two earned runs.

“He pitched with a lot of confidence,” said Rowan catcher Trevor Atwood. “He was settled in the whole game, especially after that first guy put a good swing on a ball. He settled down right after that and really pitched an effective game.”

Rowan put its leadoff batter on base in all seven innings and gave Owen a 2-0 lead against erratic lefty Daniel Carter in the top of the first. Hayden Setzer walked, Clayton Gilmore was hit by a pitch and Chandler Lippard smacked an RBI-double to deep center field. There was still nobody out with the bases loaded when Wayne Mize bounced into a run-scoring double play.

“I felt like in the first inning, if we just didn’t swing we could have scored more,” Gantt said. “(Carter) walked two guys, hit another and gave up a double. Then Mize went up there and swung at the first pitch. It could have been a bigger inning, but we just helped him out there.”

Whiteville (20-11) answered in the last of the first. Leadoff batter Brooks Baldwin triggered a two-run rally when he smoked Owen’s first pitch of the game for a ground-rule double that hopped the fence in right-center.

“He got a good pitch to hit — a fastball right in the middle,” Owen said. “It went about 390 feet, but I learned from that pitch. I struck that kid out the next three times he batted. He was probably looking for the same pitch, but he never got it.”

Owen prevailed by meshing a heavy, late-tailing fastball with a sharp, vertical curve that danced and dropped like a yo-yo on a string. “John’s curveball was his best pitch today,” Atwood reported. “He made them put it in play. We took advantage and got the outs we needed.”

Rowan went ahead for good in the top of the fourth, when Cameron Graham and Setzer delivered back-to-back doubles against losing pitcher Dylan Lawson. An inning later RC had runners on first and second with one away when Bryson Wagner dropped a sacrifice bunt to the left of home plate. Whiteville catcher Scott Bowen pounced on the ball, but his throw to first base was low and wide right — a miscue that allowed both Mize and C.P. Pyle to score easily.

“I just remember rounding second (base) and looking for the ball,” said Pyle, a jackrabbit who produced two of Rowan’s six hits. “When I saw it was a bad throw that got past the first-baseman, I just kept running. Then the third-base coach (Seth Graham) told me to go home.”

Rowan’s final run crossed in the top of the sixth when Gilmore coaxed a leadoff walk, stole second, took third on a wild pitch and raced home on a passed ball. The rest was up to Owen, who secured the win when he snapped a game-ending, 0-2 curveball past Gage Hammonds.

“My curveball was working really well,” said Owen, a post-game smile pasted to his face. “I used it to my advantage all game. I’d set up a lot of hitters with fastballs up high and finish them off with curveballs away.”

Sneaky, but fitting for someone who never backs down.

“He gave us another opportunity to play baseball,” Atwood concluded.