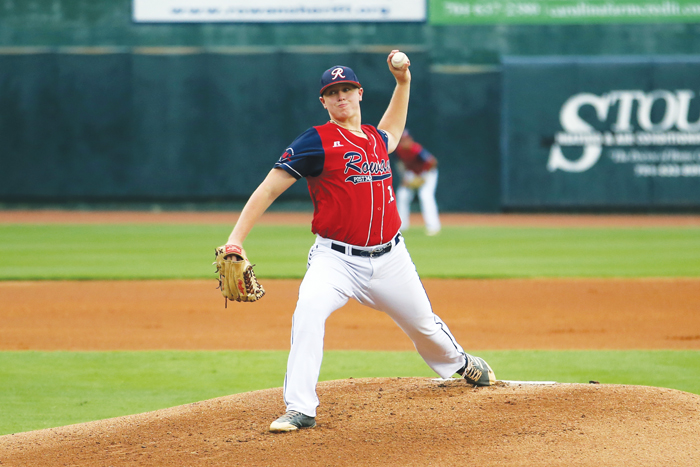 HIGH POINT —Game 1 of Rowan County’s venture into the American Legion state tournament is history — but written into that history was another stand-up performance by pitcher Daniel Durham.

The left-hander worked with guile, purpose and cool assuredness against Caldwell County on Thursday night, hurling Post 342 to a notable 6-2 victory.

“I thought Daniel Durham was outstanding tonight,” coach Jim Gantt crowed at Willard Stadium, where Rowan (32-10) captured its first decision in “Stripes” pool-play. “He did what he always does — throws all his pitches for strikes, works both sides of the plate and changes speeds and eye levels. You can never sit on one particular pitch or one particular speed, because he’ll change it up on you.”

Durham kept Caldwell (21-13) guessing for 81 pitches and 5 2/3 innings. He allowed six hits and one earned run, struck out four and induced six groundouts.

“I really haven’t pitched in a while,” said Durham, who threw one pitch and was removed from Sunday’s Area III championship game against Randolph County. “But I felt like the coaches and my teammates were all ready for me to take the ball. That made me feel pretty confident out there.”

It certainly showed. Durham retired eight straight batters between the third and fifth innings — and 12 of 13 during one stretch. He improved to 4-1 by cross-breeding a darting fastball with a curve that had only cement-truck spin in the early innings. It regained its effectiveness after Caldwell took a 1-0, second-inning lead on consecutive hits by Jack Stevens and Owen Foxx, followed by Austin Blevins’ RBI-groundout.

“At the start of the game my off-speed stuff wasn’t working,” Durham said. “I think it’s because the mound in the bullpen was pretty steep, but the mound on the field was nearly flat. I had to change my arm slot and release point.”

Gantt offered more praise after Durham fanned outfielder Avery Raynor and got Sam Rosario to fly out, dousing the rally.

“He didn’t labor at all,” the coach said. “He just knew if he executed pitches he could get out of it. He made sure it was only a small inning, not a big inning.”

Rowan drew even and went ahead against Post 29 right-hander Cy Smith in the last of the third. The bottom of the batting order fueled the surge when No. 8 hitter C.P. Pyle grounded a leadoff single into center field and Bryson Wagner coaxed a walk on a borderline 3-2 pitch. Leadoff man Hayden Setzer tied the score when he flared a soft, line-drive single into left.

“I knew we would come back against (Smith),” first-baseman Chandler Lippard said after contributing two base hits and an RBI. “I don’t think he was on tonight. It was just a matter of time before we started hitting him good.”

Rowan finished with eight hits — including two apiece by Lippard, Setzer and Wayne Mize — but it took Clayton Gilmore’s run-scoring, DP-groundout for it to take the lead. Smith, who took the mound with a 5.70 ERA this season, needed 69 pitches to record 10 outs. He was relieved an inning later after Luke Barringer jerked an RBI-single down the left-field line.

“Our guys had some at-bats in the middle part of the game that did just enough for us,” Gantt said. “After playing 10 games in 11 days and then taking a break, you don’t quite know how they’re going to respond.”

Rowan responded again in the last of the fifth, when Lippard and Mize delivered run-scoring singles against Caldwell reliever Landon Biddix. Post 29 trimmed its deficit to 5-2 with an unearned run in the sixth before Pyle reached on an error and closed the scoring on Gilmore’s groundout against right-hander Sammy Icard. Rowan southpaw Daniel Sell spelled Durham and pitched 1 1/3 innings of scoreless relief.

“We’re feeling a little more relieved,” Lippard said before boarding the team bus. “We got Game 1 out of the way, which is pretty big. But it just means we’ve got to keep it going and win tomorrow.”

NOTES: Rowan will carry a three-game winning streak into tonight’s match against Pitt County (25-7) at Thomasville’s Finch Field. Gantt indicated either John Owen (8-1) or Setzer (5-2) will get the start. Post 39 opened pool play with an 11-6 victory over Whiteville. … Lippard’s RBI was his 49th of the season and 18th of the playoffs. … Durham walked only one and threw first-pitch strikes to 14 of 24 Caldwell batters.