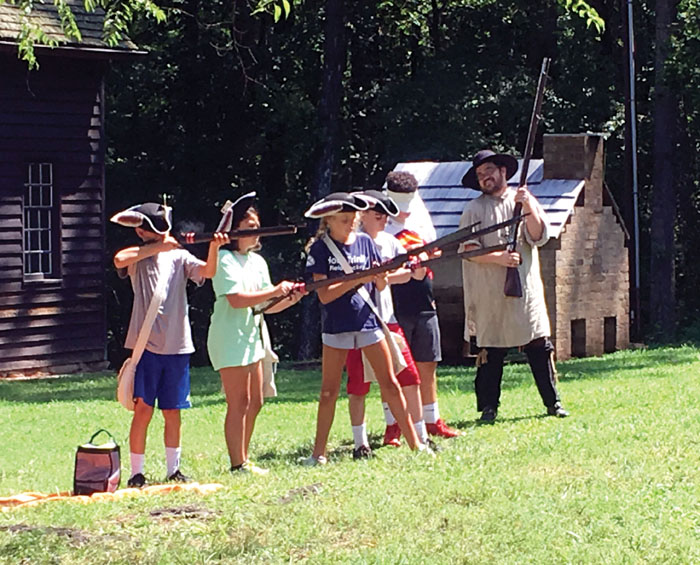 Two troops of soldiers march across the field. The British redcoat commander calls out marching instructions. A colonial militia fires its muskets from a kneeling position, when suddenly, the British charge across the battlefield to a chorus of “huzzahs!”

While it may sound like a scene from a Hollywood blockbuster, this was really a battle between “armies” at the Rowan Museum’s new American Revolution Summer History Camp.

“The Civil War camp has become very popular and we’ve had people ask us to do a Revolution camp,” said education coordinator Tricia Creel as she cooked part of the campers’ lunch: ‘Johnny Cakes,’ a cornmeal flatbread and staple of the early American diet.

The Rowan Museum has been doing summer camps for children ever since 1996, adding more camps per year and different camps along the way.

The original camp was the colonial-era camp for elementary schoolers and was offered once a year. In 2004, the program grew to two colonial camps a year. In 2014, Simon Connolly, a local Civil War re-enactor, helped the museum to start a Civil War camp for middle school students.

Connolly, who is soon to be deployed to South Korea, said, “In the spirit of revolution-era British soldiers, this is ‘one last huzzah’ for me.”

He said he enjoyed the change of pace.

“I had to do a lot of research and teach myself so that I could then teach the children. It’s almost like I’m a camper too, so this has just been a great experience for me,” Connolly said jovially.

“With this camp, we really wanted to show the complexity of the American Revolution, especially in the backcountry,” museum director Aaron Kepley said. “People always think about the Civil War as being ‘neighbor versus neighbor,’ but the Revolution was very chaotic, especially around here.”

To describe what makes the camp unique Kepely said, “The colonial camp is about what life was like during that time, and the Civil War camp is more about the war, but this brings the two together.”

The camp teaches about the war with mock battles and marching drills. It also teaches about life on the homefront with activities like knitting and making silhouettes.

“We try to make it personal for the children. For example, we gave them an exercise where they had to plan out their farm to grow crops and livestock to survive off of,” said Kepley. “You always hear about how kids don’t understand things like this, but they are getting it and really getting into it.”

Veteran of the colonial camp, Macara Trick said that her favorite part of the camp has been the crafts. She returned to the museum for the Revolution camp because of a friend’s recommendation and previous good experiences.

Elijah Foreman however liked “the muskets and fighting.”

Foreman has been to both the colonial camp and the Civil War camp and wanted a change.

“I like history and the camps are fun,” he said, “so I keep coming back.”