Panthers: Healthy Newton betting on himself 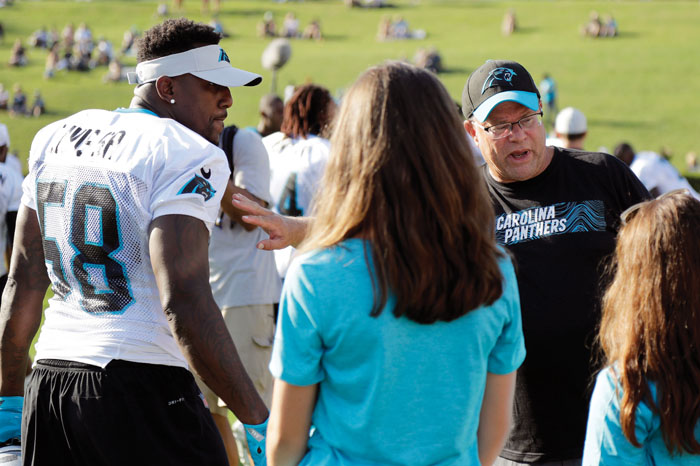 SPARTANBURG, S.C. (AP) — Panthers quarterback Cam Newton posted a photo of himself earlier this week on Instagram sitting at a card table with a stack of poker chips in front of him that read: “I’m BETTING EVERYTHING on ME!”

It’s just one of several recent posts by Newton, most of which include him working out or showing off his chiseled six-pack abs.

The league’s 2015 MVP enters his eighth NFL season anxious to push the Panthers deeper into the playoffs after an 11-5 regular season ended with a first-round playoff loss to New Orleans last season.

Newton was in a jovial mood Thursday night as the team held its first training camp practice at Wofford College as new owner David Tepper looked on from the sideline. The quarterback led “the wave” with the crowd and laughed it up with teammates during breaks in practice.

It helps that Newton doesn’t have to worry about rehabbing an injured shoulder as he did last summer.

Newton missed all of minicamp and OTAs in 2017 after rotator cuff surgery on his throwing shoulder following the 2016 season. He was back to throwing at training camp last year, but developed soreness after five practices.

Not wanting to chance any setbacks, the Panthers only allowed Newton to throw two passes in the preseason games.

Newton made it back for the start of the regular season and played in all 16 games. He struggled statistically, completing just 59.1 percent of his passes with 22 touchdowns and 16 interceptions, but it’s difficult to pin that on Newton or his shoulder.

Injuries to the offensive line and wide receiver position often left the former Heisman Trophy winner running from defenders after being flushed out of the pocket, desperately trying to find an open option.

Panthers general manager Marty Hurney addressed the need for playmakers at the wide receiver position this offseason by trading for Torrey Smith, signing free agent Jarius Wright and drafting rookie D.J. Moore in the first round.

“I thought you saw a lot of energy out of our offense in minicamp,” Hurney said. “You just don’t know, but you want to see it come together.”

Newton is also adapting to a new offensive scheme after the Panthers fired Mike Shula and replaced him with Norv Turner. Running back Christian McCaffrey said Turner and Newton “have really bonded” so far this offseason.

“Cam’s been throwing it really well. He has been making great reads and I think he’s just as excited as anybody for the season,” McCaffrey said.

Coach Ron Rivera said what excites him the most about Newton is the simple fact that he’s healthy and, as Panthers wide receiver Devin Funchess said, “is ready to rock.”

That has allowed him to work through some of the intricacies of Turner’s offense during OTAs and minicamp.

“Going into this camp, I think we’re already ahead with him,” Rivera said.

Newton didn’t talk to reporters following the completion of the team’s first practice at Gibbs Stadium, instead spending time signing autographs before heading in for team meetings. But he did post “you know I’m ready” in a recent Instagram video.

“I think that’s the understatement of the year to say that him being out there makes a big difference, right?” said Olsen, who missed more than half of the 2017 season with a foot injury.

“Just his presence on the field. Having a full OTAs and minicamp with him and then getting some work done with him this summer and just seeing how good he’s feeling and moving around and training and throwing a lot, and now being able to do a full training camp — those are all stark contrasts with where we were at this point last year. One would hope that that’s a good sign for us.”

Newton is betting on it.