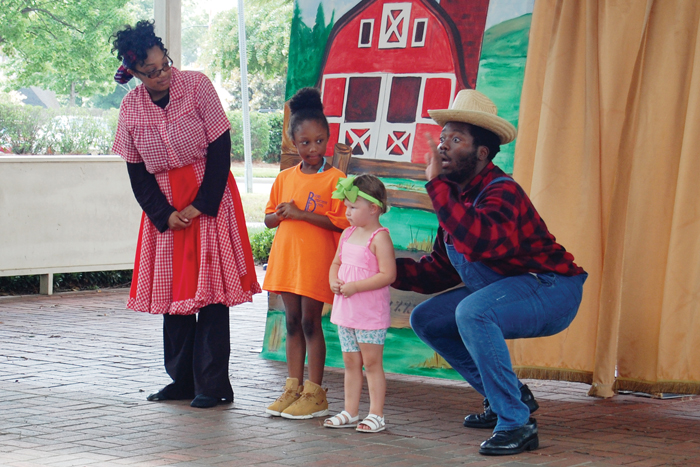 KANNAPOLIS — The calming trickle of fountains at Kannapolis’ Veterans Park was joined Wednesday by cheerful laughter and songs as folks gathered around the park’s gazebo.

The singalong was led by Old MacDonald and his wife, Mrs. MacDonald, cast members from Bright Star Touring Theatre based in Asheville.

Portraying MacDonald and his wife were Kenderick Scorza and Sarina Montgomery, each on their first tour with the theatre group.

Scorza, from Arkansas, said his time with Bright Star came together suddenly.

He had a friend who had toured with the company before who put him in contact with the group.

“Within the span of about five days, I flew from Arkansas to Atlanta where I met up with Sarina,” he said.

Montgomery, who lives in Atlanta, was similarly tied into the show last minute by a friend and former cast member.

The two met in Atlanta and traveled to North Carolina, where Scorza said they learned three shows in the course of five days: “African Folktales,” “Freedom Songs: The Music of Black History” and — as they performed Wednesday — “Old MacDonald’s Sing-Along Farm.”

The two-person show in Veterans Park involved characters Old MacDonald and Mrs. MacDonald as well as token farm animals. There was a sheep, a cow and a dog — portrayed by Montgomery or Scorza after a quick costume change behind a farm-painted backdrop.

The show contained a mix of classic children’s songs and other family favorites, from “This Old Man” and “Camptown Races” to “This Little Light of Mine” and “Down By the Riverside.”

“I liked the music and how they brought the songs from the old days back to today,” she said.

But according to the show’s stars, the performance offered more than just a chance to celebrate some treasured tunes.

Montgomery said it was a chance to expose younger audience to the word of theater.

“Afterwards, they ask questions. ‘What’s it like being an actor?’ ‘Were those stories real?'” she said. “It’s just so great to teach them about theater. And if they want to pursue it? I’m hopeful I’m planting little theater seeds.”

Scorza agreed, saying that the program helped “reach a younger audience” and “foster a love of the arts.”

“Because the arts are very important,” he said. “No matter what job you work in, whether you’re in the medical field or you’re in construction, just to see people engage in these ways helps to foster confidence. It helps them move along with whatever their career choice is.”

Groundbreaking on Wil-Cox Bridge project to be held Monday