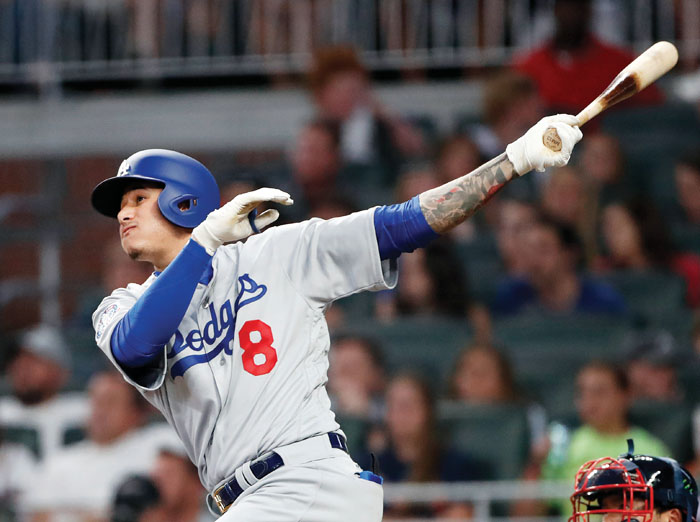 Los Angeles Dodgers' Manny Machado follows through on a solo home run in the sixth inning against Atlanta Braves in a baseball game Thursday, July 26, 2018 in Atlanta. (AP Photo/John Bazemore)

Machado, acquired last week from Baltimore to add even more punch to a team that leads the National League in homers, went deep in his seventh game with the Dodgers. He lined a fastball into the left-field seats leading off the sixth against Anibal Sanchez, Machado’s 25th homer of the season overall.

Hill (4-4) limited the Braves to three hits and a walk while striking out seven, and he even picked up his first RBI of the season .

Atlanta managed only one scoring threat against the 38-year-old left-hander, which wasn’t even of Hill’s doing. With two outs in the sixth, Freddie Freeman reached when Machado’s wild throw from third got knocked out of Cody Bellinger’s glove as the first baseman tried to swipe Freeman with a tag. Nick Markakis walked on four pitches — the lone time Atlanta got a runner as far as second base against Hill — but Kurt Suzuki hit an inning-ending flyout.

While Sanchez (5-3) turned in another solid outing for the Braves, defensive blunders and a lack of offense ruined his night.

Shortstop Charlie Culberson’s throwing error in the fifth led to an unearned run. Another errant throw by second baseman Ozzie Albies in the seventh set up Hill’s run-scoring single, which finished off the Braves starter.

Sanchez went 6 1.3 innings and wound up being charged with four earned runs when the Dodgers blew open the game against Sam Freeman. Joc Pederson doubled into the right-field corner, and Yasmani Grandal’s two-out, two-run single stretched the lead to 6-0.

Culberson, getting a rare start at shortstop while Dansby Swanson took the night off, was charged with another throwing error in the eighth as the Dodgers tacked on two more runs. The Braves entered with just 48 errors in 98 games, fourth fewest in the NL.

CHICAGO (AP) — David Bote hit a tying, two-run homer off Brad Boxberger with one out in the ninth inning, Anthony Rizzo followed two pitches later with a winning home run and the Chicago Cubs overcame a five-run deficit to beat the Arizona Diamondbacks 7-6 on Thursday.

Bote was called up when Kris Bryant was put on the disabled list because of inflammation in his left shoulder.

BOSTON (AP) — Mitch Garver hit a tiebreaking RBI double with two outs in the eighth inning, and Minnesota held on to beat Boston.

Kyle Gibson (5-7) held Boston to four hits and one run in eight innings. Fernando Rodney surrendered a single and back-to-back walks to load the bases in the ninth, but he struck out Jackie Bradley Jr. to complete the five-hitter and earn his 22nd save in 27 opportunities.

The Twins have won four straight. Boston has lost three of five. Its lead in the AL East fell to 4½ games over the New York Yankees, who beat Kansas City on Thursday.

PITTSBURGH (AP) — Asdrubal Cabrera went 3 for 5 with a home run and four RBIs to break out of an extended slump, and New York pounded sloppy Pittsburgh for its first three-game winning streak since mid-June.

Cabrera entered hitting just .184 (7 for 38) in his prior 12 games. He doubled home Devin Mesoraco in the second against Nick Kingham (5-5) and hit a tiebreaking, two-run homer in the fourth.

MIAMI (AP) — Trea Turner homered and hit a tiebreaking, two-run triple in the seventh inning that led Washington over Miami.

Juan Soto also homered and Matt Wieters added a two-run double for the Nationals, who trailed 3-0 before rallying. Washington had nine extra-base hits in the opener of a four-game series.

Tommy Milone made his season debut for the Nationals, allowing three runs and eight hits in five innings with six strikeouts and no walks. Justin Miller (6-1) followed with a perfect sixth.

Matt Chapman homered, tripled twice and scored three runs for the A’s, who have swept three four-game series on the road for the first time since 1928. Oakland has won six straight games, matching its season high, is 27-7 since June 16 and trails Seattle by one game for the AL’s second wild card.

Cahill (2-2) allowed five runs, seven hits, three walks and a hit batter in five innings. He had been 0-2 since beating the Chicago White Sox on April 17 and twice went on the disabled list.

CINCINNATI (AP) — Rhys Hoskins, Maikel Franco and Nick Williams each hit two of Philadelphia’s record-tying seven home runs, and the Phillies overpowered Cincinnati in the opener of a four-game series.

Carlos Santana added a two-run homer as the NL East leaders tied the franchise record for home runs in a game, set on Sept. 8, 1998, against the Mets.

Franco’s first homer, off reliever Michael Lorenzen (1-1), snapped a 4-4 tie in the fifth.