Hang out for laughs and fun on ‘Avenue Q’ 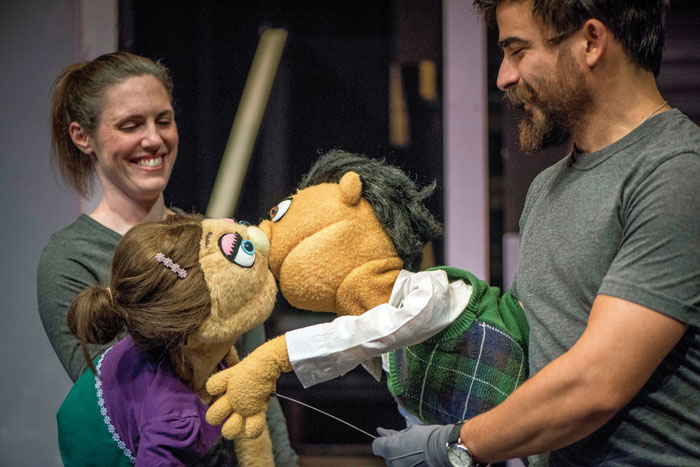 “Avenue Q” is where the expected happens but in unexpected ways.

This musical mix of actors and puppets is cute but also surprising. It is not a children’s show.

The Piedmont Players production is lively, well-done and entertaining, but it is for adults and deals with adult themes like joblessness, relationships, addictions and the like — in a fun way.

The seven-member cast works so well together, and it looks like they are having fun.

Jacob Brayton, a veteran on Salisbury stages, is excellent as Princeton, the guy with a B.A. in English, and Rod, the guy who can’t admit he is gay. The way Brayton uses his voice for the separate characters makes each one of them unique. He makes both so appealing.

Karen Christensen, who played a gutsy yet vulnerable Roxy Hart in “Chicago,” plays Kate Monster and Lucy, the lascivious lounge singer. Again, the way she uses her voice makes those two characters singular.

The interaction among the actors, through their puppets, is delightful. Kate may be a furry girl, but she has the same dreams and hopes as anyone else. Princeton thinks he must find his purpose in life, but he isn’t sure where to start.

Nicky, who is green, is an endearing guy who knows his roomie is a homosexual but doesn’t have a problem with it. His problem is, Rod, an investment banker, won’t come out and say it.

Robin Rogers is the female Bad Idea Bear, who tempts Kate Monster with Long Island iced teas and happily leads her down a scary path. She’s also Mrs. T, the mean old teacher Kate Monster works with. And Rogers is everywhere in this production, lending a hand to multiple puppets.

There are three actors without puppets — Aaron Trusky, who plays Brian, a big guy who wants to be a stand-up comic; his girlfriend, Christmas Eve, played by Winnie Mikkelson, a Japanese woman who has two master’s degrees in social work but no crients — er, clients; and Alexis Greer, the apartment super who just happens to be Gary Coleman. Yes, THE Gary Coleman.

OK, so suspend your disbelief on that last one. Also, who knew Gary Coleman could sing like that and shake so much booty? Greer, as always, is so much fun on stage.

Mikkelson is charming, funny and quite cute. She takes on the most difficult accent, substituting Rs for Ls. Her big song is “The More You Ruv Someone,” which includes a line something like, the more you ruv someone the more you want to kirr them.

Trusky, because he is so tall, is comedic just in his appearance, and his efforts at stand-up, like “I’m Not Wearing Underwear Today,” always fall flat.

Princeton loses his job the day he was supposed to start, and Kate finds herself looking to fulfill her purpose, too. But she knows what it is, a monster school, so little monsters can be educated without feeling the prejudice of others.

And here we come to the big message in “Avenue Q” — prejudice and racism. These cute puppets, each unique and different, and the other characters all face challenges because of prejudice. Christmas Eve is a stereotypical Asian, with the funny accent and the big brain. Gary Coleman is black. Kate Monster is a furry being, not a felt-skinned human. Princeton is a bit of a snob because he went to college — and he’s willing to tell an ethnic joke for a laugh.

Most of the cast sings “Everyone Is a Little Bit Racist,” suggesting we accept that and move on to bigger and better things.

And there are more great songs, starting with “It Sucks to Be Me,” a lament all the characters share, for various reasons, and Kate’s poignant number, “There’s a Fine, Fine Line,” about love and a waste of time.

You can learn an old word that’s very important these days in the song “Schadenfreude,” which means taking pleasure in others’ suffering. Far too much of that going on.

When the show comes to a happy, if improbable, ending, you’ll be happy, too. You’ll feel like your troubles are about on par with everyone else’s and that it was worth it to spend an evening laughing and watching puppets.

The puppets, by the way, were sponsored by Eric Slipp. Adrian Smith is musical director for the show. Reid Leonard assembled a superb cast for this production, which is in the Norvell Theater, for a change. The great sight lines assure you will see what the actors and puppets are doing. And do remember, the actors are doing all the hard work, and that’s why you’re watching the puppets.