Groundbreaking on Wil-Cox Bridge project to be held Monday 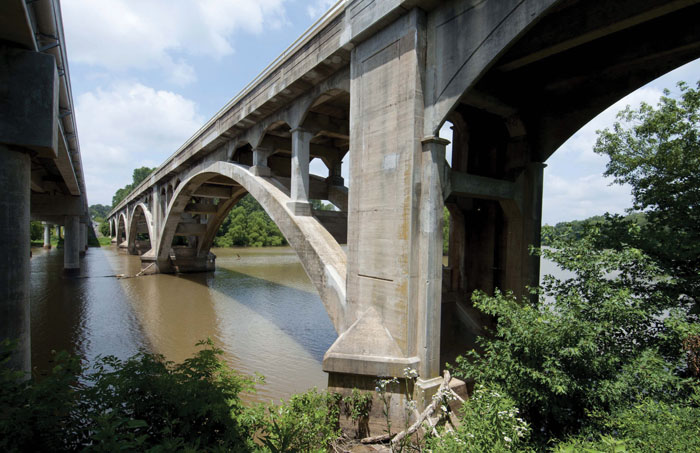 The 1924 Wil-Cox Bridge over the Yadkin River is closed to vehicle traffic. The bridge has been repurposed as a pedestrian bridge and a historic landmark. JON C. LAKEY / SALISBURY POST

DAVIDSON COUNTY — On Monday, workers will break ground on what officials hope will become a tie between two communities.

The Wil-Cox Bridge, once a route across the Yadkin River between Rowan and Davidson counties, is being turned into a destination for bikers, walkers and nature enthusiasts. The groundbreaking will begin at 10 a.m. on the Davidson County side of the bridge, just off Highway 29.

“It’s nice to be able to get the construction started,” Guy Cornman, planning director for Davidson County, said.

Davidson County acquired the bridge in 2015, after the North Carolina Department of Transportation permanently closed the route following renovations to the Interstate 85 bridge over the Yadkin.

Officials from both counties wanted to preserve the bridge and the surrounding riverbank due to the area’s history.

“There is an extraordinary amount of history around that bridge. It is incredible,” said Max Walser, Wil-Cox Bridge Steering Committee chair.

The crossing was once a trading ford for Native Americans, and played a key role in the Revolutionary War when General Nathanael Green crossed the river fleeing from General Charles Cornwallis. George Washington also passed through the area during his 1791 southern tour; and one of the last battles of the Civil War was fought at Fort York, which overlooks the river just above the Wil-Cox Bridge. The bridge itself was built in 1924.

Monday’s groundbreaking is the first of many steps that will turn the area into a vibrant park that will connect parks throughout the region.

“This is part of a grand plan,” Cornman said.

He envisions a linear park along the river with walking and biking trails, river access and connections to local trails and greenways.

“It could be a potential link to the Carolina Mountains to Sea Trail,” he said.

The site could also tie in Rowan and Davidson counties’ Carolina Thread Trail routes, and the area’s greenways. And if they can’t accomplish that, Cornman and others have a more modest goal.

“At the very least it will give folks a greenway or walkway to go upriver to Boone’s Cave Park,” he said.

The park is located several miles upriver from the Wil-Cox Bridge. And, of course, Fort York and its associated battlefield will be a prominent feature of the area.

But Monday is a modest start. DreamBuilt Construction, Inc. will begin preparing the bridge for pedestrians, including installing lighting, adding landscaping and shade and placing benches. The bridge will be closed to cars and other vehicles.

Along with the bridge, the Department of Transportation also gave Davidson County the $2.5 million it had set aside for the bridge’s demolition. It’s money that will go to preserve the bridge’s future.

“We have those monies invested for the long term maintenance and upkeep for the bridge,” Cornman said.

Because federal money is tied up in the project, the bridge must be inspected every four to six years, according to Cornman. Those involved in the project have been involved in a flurry of grant writing for the past few years, and are excited to see things get moving.